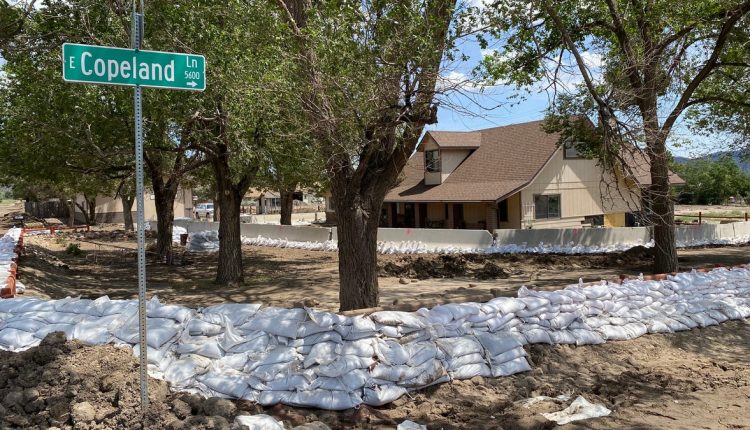 More than 1,500 homes at risk for flooding around Flagstaff

Extensive flood mitigation efforts have been underway since a group of storms caused serious flooding in areas in and around Flagstaff, particularly in the nearest neighborhood the burn scars from recent wildfires.

“We’re continuing to really focus on getting sandbags produced, getting them into neighborhoods,” said Lucinda Andreani, the Coconino County Flood Control District manager.

Right now there are about 15,000 sandbags stockpiled throughout these areas, she said, which include Doney Park, Fernwood, Timberline and Wupatki Trails.

As these neighborhoods recover from last week’s floods, serious monsoon activity remains on the horizon.

In a monsoon season that started about a month earlier than usual, a collection of storms expected this weekend into early next week are going to bring with them the most monsoonal moisture the area has seen so far this year, according to Molly Gerhardt, a meteorologist with the National Weather Service at Flagstaff.

With that monsoon activity, the greatest threat is flash flooding, Gerhardt said.

A weather service forecast stated there was a 50% chance of thunderstorms Friday in the Flagstaff area, with storm chances continuing through the weekend and next week.

After last week’s floods prompted the City of Flagstaff to issue a shelter in place order for some at-risk areas, the Arizona National Guard was deployed to the area to help with sandbag efforts.

gov. Doug Ducey issued a declaration of emergency Wednesday to make additional state resources available for response and recovery efforts, according to a statement from the state governor’s office.

“When Arizona communities are in need, we come together,” Ducey said in the statement. “In the last week, we’ve seen just that. In a community already impacted by wildfires, the monsoon season presents dangerous challenges.

“This fire season has already been extremely active and it’s crucial that our local officials and leaders continue to have the resources they need to respond to the aftermath of heavy rains,” the governor continued.

Ducey deployed the National Guard on July 16 to assist with efforts to mitigate the flood threat, such as filling sandbags. Sixty volunteer service members supported this direct request and have since filled 800 pallets, equaling 56,000 sandbags, according to the statement.

The Arizona Department of Emergency and Military Affairs worked with private sector partners and nonprofits to provide water and food for sandbagging crews.

“When called upon, we volunteered beside our emergency responders and community members,” Maj. Gen. Kerry Muehlenbeck, DEMA director, said in the statement.

This weekend, the Red Cross is expected to distribute flood cleanup kits to residents and the United Way of Northern Arizona will help with debris removal, according to the governor’s statement.

Based on current models, around 1,500 homes in the area are at risk of flooding, Andreani said.

For every property deemed at high-risk for flooding, a mitigation plan has been designed for that specific location and is available on the Coconino County website.

“We’re in a major flood fight,” she said.

In addition to short-term measures to reduce the immediate impact of flooding, the county and the US Forest Service are working together to coordinate restoration projects for watersheds damaged by wildfires as well as preventative forest restoration.

By thinning the overpopulated forest and conducting prescribed burns, the area will be less likely to suffer from a severe wildfire and by extension the extreme post-fire flooding that has become common.

“It doesn’t mean you won’t still have fires but the catastrophic nature of the fires will be reduced dramatically,” Andreani said.

Importantly, these preventative measures will prioritize areas that present the most danger, like the west side of the peaks which have a very high risk for fire as well as post-fire flooding.

“If they burn, they will create catastrophic flooding way beyond anything we’re seeing right now through Flagstaff,” she said.

Unfortunately, these restoration plans can take years to get off the ground let alone complete.

With heavy rains across much of northern Arizona in the forecast for the coming days, flood mitigation is likely to remain the best option for the foreseeable future.

“We can keep mitigating these floods and trying to work on that and spending millions,” she said. “We should be putting our millions into restoration so we don’t have to do this.”

Coconino County officials offered the following tips online and advised residents to be prepared for the approaching storms and potential flooding threat. They further recommended that residents sign up for emergency alerts and remember to be in READY status for potential emergencies.

Phoenix calls on artists for a 2023 Super Bowl mural project