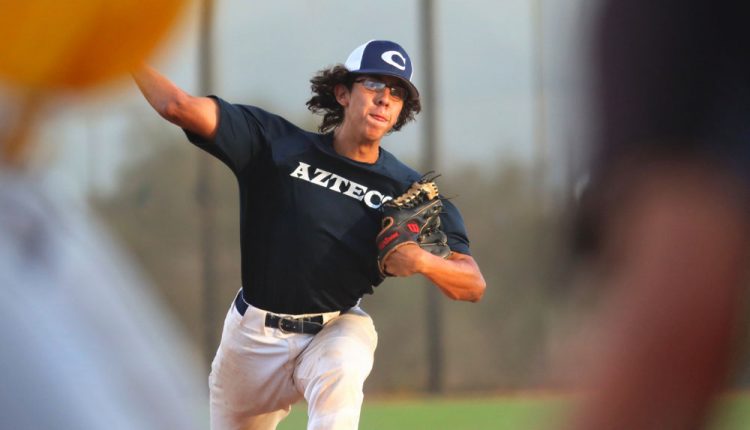 The Catalina Aztecs moved to 3-0 this summer with a 5-4 come-from-behind win over Speedway Gamblers Wednesday night at the Kino Baseball Complex. The Gamblers fell to 0-4 in the Sun Belt College League, Tucson’s Collegiate Summer League.

Managed by former Arizona Diamondbacks pitcher Eric Sabelthe Gamblers took an early 1-0 lead thanks to a couple of errors and an RBI from William Martinez. The team went up 2-0 in the third on a sacrifice fly from Martinez and then 3-0 in the fourth on an RBI single from Leonel Villa. The Aztecs got one back in the bottom half of the fourth after RJ Molina beat out an infield single and then Benji Cazares knocked him in with two outs.

The Gamblers went up 4-1 in the fifth on an RBI double from Cougar Cooke but the Aztecs scored three runs in their half of the fifth to tie the game up. Tyler Delk led off with a double and Austin Grimm brought him in one out later to make it 4-2. University of Arizona commit Nicholas Warren tripled in a run to make it 4-3 and then Francisco Yescas hit a groundout RBI to make it 4-4.

The Aztecs, managed by legendary player and coach Mike Odumwent with five pitchers with Sam Sides getting the start with Dominic Phillips, Ricardo Santiago Gonzalez other Jacob Schlesselman making appearances before Arizona pitcher Drew Galloway took over in the eight inning. Ivan Villa got the start for the gamblers and he collected 8 strikeouts in six innings of work and Daniel Pacheco finished the game.

The Aztecs picked up the winning run in the bottom of the seventh on an error after Cole Phillips and Grimm walked with one out and Yescas reached on an error with two outs, scoring Phillips to make it 5-4. The Gamblers came alive in the top of the ninth after Karim Soto Walked with two outs and Martinez doubled to right to put them both in scoring position. Calloway induced a ground ball to end the game. Cazares went 2 for 4 with a double and an RBI to lead the Aztecs.

ASU commit Isaiah Jackson leads the league with 2 home runs and University of Mary pitcher Jonnie Foreman has 12 strikeouts. The league stats have not been updated from Wednesday night.

Play will continue Friday night at the Kino Baseball Complex starting at 6:30 pm The All Star Game is slated for July 3 in Kino Stadium and the playoffs are set to start on July 11.

The Sun Belt College League is presented by Kino Baseball.

American Legion play started on June 6 and the regular season runs through July 5 at ten different fields from Casa Grande, Tucson and Sahuarita.