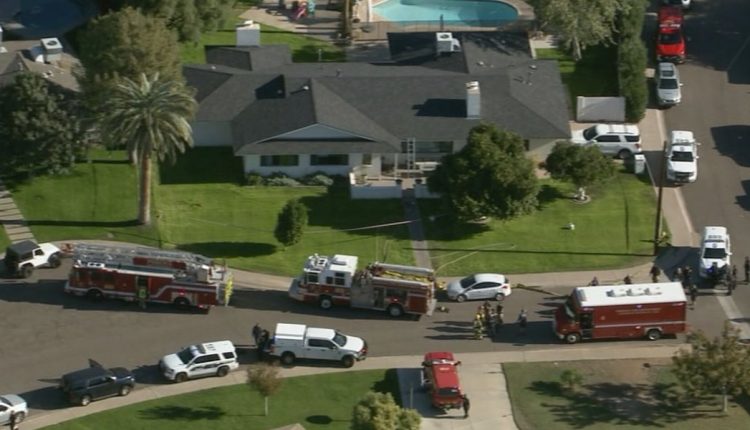 PHOENIX (3TV/CBS 5) — Multiple people have been found dead inside a Phoenix home Wednesday morning during a situation involving hazardous materials.

Police, firefighters, and the department’s hazardous materials teams were dispatched to a home on Augusta Avenue, near 7th Avenue and Northern, just after 8 am on Wednesday. Police and firefighters located several victims inside the home, but say first responders have not entered over safety concerns. Area homes were also evacuated as a precaution for a short time but police now say there is no immediate danger to the neighborhood.

Officials have not released other details about the situation or what materials are involved, but police confirm that gas service has been shut off at the home out of an abundance of caution. Just before noon, Southwest Gas released a statement stating that no leaks were found on site after crews thoroughly inspected natural gas infrastructure at the home and surrounding area.

Southwest Gas responded to an incident near Augusta Ave in Phoenix earlier this morning. Our hearts are heavy with today’s news and we are grateful for the quick response of first responders. There is nothing more important to us than to keep our communities safe and our crews continue to work with first responders to ensure the area is safe and secure. Southwest Gas crews have thoroughly inspected all natural gas infrastructure from the meter on the property to the street and surrounding area for gas leaks. No leaks were found. All Southwest Gas infrastructure serving the community is operating without issue. We will continue to work with the Phoenix Fire and Police departments who have the lead on this incident to assist in the investigation.

Video from the scene shows multiple emergency response vehicles in the neighborhood.

This is a developing story and Arizona’s family has multiple crews at the scene. Check back for updates.

MAGA fails in Arizona for the third straight election