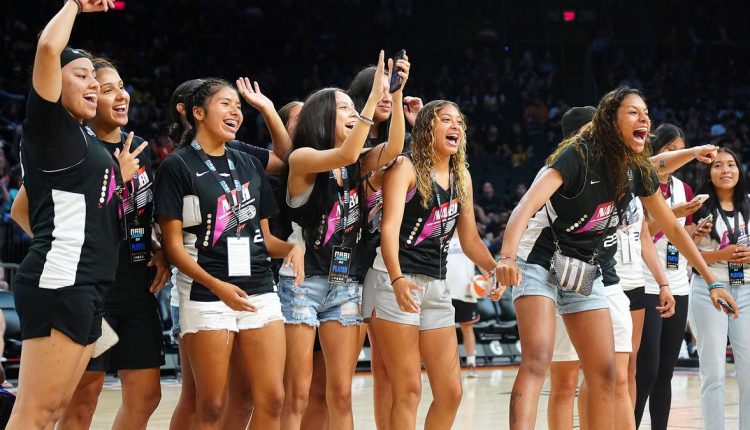 NABI’s final four teams were honored at halftime of the Phoenix Mercury’s game against the Seattle Storm on Friday night.

The Native Soldiers of Florida and Rezbombers of Arizona will compete in the girls’ championship on Saturday. The Northern Elite and AZ Warriors, both of Arizona, will play for the boys’ crown.

“Basketball is such a great game,” Mercury head coach Vanessa Nygaard said. “And it’s great that we have our Native American community that loves it so much… we share that in common. So, I’m glad that they’ll have the championships on the same floor tomorrow. I wish the best of luck to the teams that are participating for sure.”

When the game clock clicked down to halftime, NABI’s finalists got to step on the court they’ll be playing on in fewer than 24 hours. The camera panned to each team as it was announced, and players waved and cheered at the camera.

“It’s exciting to be one of the final teams out of (136) teams,” Josie Hill, a player for the Native Soldiers, said. “We’ve got a lot of adrenaline, and we’re happy to be here.”

The Mercury held Native American Night on Friday as all 1,300 NABI participants looked upon the game from the top section.

Award-winning musician Callie Bennett sang the national anthem in her native Navajo language ahead of the game. Jonathan Nez, the ninth president of Navajo Nation, what also in attendance.

Rick Destea, the coach of the Northern Elite, said his team especially appreciated the national anthem because many of his players are Navajo.

“Always a good feeling to have that available,” Destea said. “And it’s good to hear it’s good for our people. It’s a great feeling to hear that every time they honor that, especially for our tradition, our culture, and a majority of our kids are representing Navajo Nation.”

NABI players also got to witness the final meeting between two of the WNBA’s longest-tenured and legendary players, Diana Taurasi and Sue Bird. In a fourth-quarter push, the Mercury took down the Storm, 94-75.

“Girls are more underrated than boys in basketball and the NBA,” Hill said. “I love to see all the support here.”

The Native Soldiers will take on the Rezbombers in the girls’ championship on Saturday at noon at the Footprint Center. The boys’ championship will follow at 1:30 pm

“I’m excited, and at the same time, I’m nervous,” Destea said. “You know, there are a lot of people back home and they want us to win this championship. It’s gonna be a good game.”