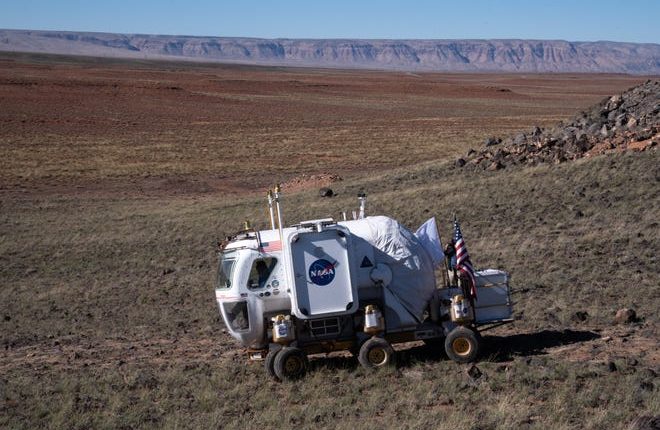 NASA has returned to a remote area off the highway 40 miles north of Flagstaff to practice for moon missions in an environment similar to the lunar surface, a rite of passage for all moon-bound astronauts.

The overall goal of NASA’s Artemis program, a collaboration of more than a dozen countries, is to return to the moon and continue exploration.

The mission aims to eventually develop a base camp that would allow astronauts to establish the first long-term presence on the moon. Further, what is learned on and around the moon would be used to inform their next mission: sending astronauts to Mars.

The Desert Research and Technology Studies (Desert RATS) team has partnered with the Japanese Aerospace Exploration Agency to work with a new pressurized rover, testing operations that will be a key element of future lunar missions as part of the Artemis program.

Desert RATS crews are a critical part of the space agency, working in lunar-like environments to test technology, equipment and more for future missions in space. From Oct. 11-22, three two-person crews took turns living and working in the new pressurized rover, roaming the arid desert landscape and exiting to conduct simulated moon walks.

Because this area of ​​northern Arizona is particularly unique in its geological makeup, it has been the training grounds for all lunar mission astronauts to train stretching back 50 years to the Apollo program.

This is the first time in 11 years NASA crews have returned to Black Point Lava Flow. The previous program to send astronauts to the moon, Constellation, was effectively canceled when President Barack Obama left it out of the 2011 federal budget.

The area boasts volcanic soil similar to that on the moon, easy access to Meteor Crater National Landmark, and the depth of evolutionary history written on the rock walls of the Grand Canyon, making it geologically desirable, said Lauren Edgar, a research geologist with the U.S. Geological Survey.

But while there are some areas in Hawaii and Iceland that have similar geological characteristics, the overall logistic access and longstanding relationships with local landowners and organizations make Flagstaff the perfect place for this testing, she said.

The goal of this round of testing is to gather data about the new rover’s design and performance to inform future pressurized rovers that eventually will be used on the surface of the moon.

The rover is designed to house two astronauts for 30-day stretches and will have an overall lifespan of 10 years of continuous use on the lunar surface, spanning multiple Artemis missions.

Notably, the Artemis mission is focused on the lunar south pole, which has not been explored previously and could provide unique insight into potentially sustaining life on the moon and then elsewhere in the universe.

Trip of a lifetime:Want to travel to the edge of space in a balloon? A Tucson company is taking reservations

The moon “is the thing that all of humanity sees in the night sky,” said Marcum Reagan, Desert RATS mission manager. “That is the one thing that’s out there in space that we can all relate to in some way and I think it’s the appropriate next step to take if our species is going to continue learning about where we fit in cosmologically and taking those steps off of this planet.”

The previously unvisited south pole presents unique challenges when it comes to environmental conditions. In some areas, the extremely low angle of the sun makes it particularly difficult for astronauts to see the ground. To try to mimic these harsh shadows, the crews have been using an artificial sun and working with lights on their suits and the rover to determine a lighting setup that allows them to carry out their mission.

“One of the reasons why we’re interested in the lunar south pole is to look for the permanently shadowed regions that might include ices, including water ice, that might be a good resource for future missions,” Edgar said. “It’s also a whole new part of the moon that we haven’t been to before so there’s a lot that we can learn about the formation and evolution of the moon by going to this region.”

Outside of the lunar surface priorities, the mission also has some goals to expand diversity in space exploration. One explicit objective of the Artemis program is to land the first woman and person of color on the moon.

“The Artemis Accords are about exploring the moon peacefully and for all mankind and I like seeing that we have this diversity of the population here on Earth starting to be represented in this,” Reagan said. “And I think you’ll see more of that as we go forward and it really will look like humanity starting to explore the moon.”