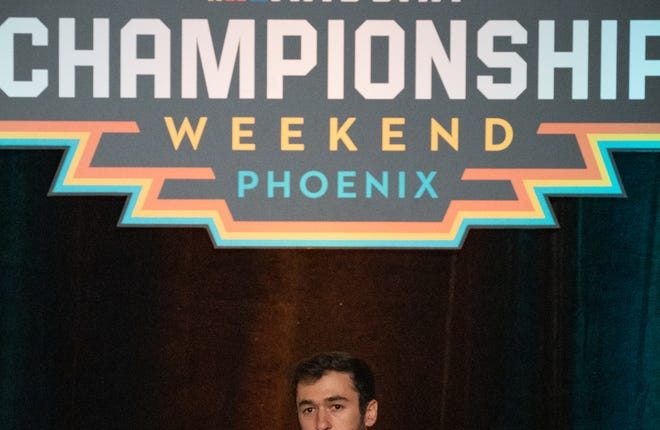 Once the checkered flag waves at the conclusion of the Xfinity 500 from Martinsville Speedway on Sunday, it will mark the culmination of a nine-month, 35-race barrage of unpredictability, while simultaneously setting the stage for a title fight of epic proportions at Phoenix raceway.

Martinsville, nicknamed the “paperclip” for its slender and unique egg-shaped dimensions, is serving as the host for the semi-final race for a third consecutive season. Ringing in at just .526 miles around, the shortest track on the circuit has a 75-year reputation for supplying the fireworks, making it the perfect appetizer for the series finale in Avondale.

With only one elimination race remaining before the NASCAR Cup Series crowns a champion in Phoenix, it’s important to understand what the season has looked like to this point.

Entering the 2022 season, the introduction of a brand-new, seventh-generation stock car brought promises of parity, which have since been fulfilled. There have been 19 different winners, including five first-time victors, through 34 races, tying a modern era record dating back to 2001.

As one might imagine, this unprecedented trend has provided a stark contrast to the accustomed dominance displayed in years past. Case in point, reigning champion Kyle Larson won 10 races with 2,581 laps led in 2021, contrasted to Chase Elliott’s series-best stats of five wins and 803 laps led during this season.

The fallout of NASCAR’s Next Gen car has had a direct impact on the postseason, both positively and negatively.

From a competition standpoint, success has been much harder to come by for the 16 playoff drivers with a stock car that promotes perfection. Eight races into the 10-week championship bid, only three active postseason drivers have won and the reigning champ was eliminated after the Round of 12.

It’s important to note that although Larson won’t be able to replicate the glory he felt in hoisting the Bill France Cup at Phoenix last year, he will still be competing for the owner’s championship following his win last weekend at Homestead-Miami Speedway.

With the Round of 8 set to wrap up in Martinsville this Sunday (11 am, NBC), there are still three vacancies left to fill for the Championship 4 after only Joey Logano locked himself into the big race with a win at Las Vegas Motor Speedway . Ross Chastain, Chase Elliott, William Byron, Denny Hamlin, Ryan Blaney, Christopher Bell and Chase Briscoe are the other eligible drivers.

“It’s nice to say you’ve been here before,” said Logano, the 2018 champion. “Experience does matter as you go through these rounds. Saying you’ve been here before and knowing how to handle the pressure that comes your way — and also knowing you know how to do it, right? You can say you know how to do it, but if you haven’t done it, how do you really know?

“Kind of going through it a few times before is helpful, and when you look at the Round of 8 and the drivers that are left, it’s a crazy look compared to what we’ve had in the past.”

To give you an idea of ​​how diverse this set of eight playoff drivers is, only Logano and Hamlin are over the age of 30, while Logano and Elliott serve as the only two former champions in contention.

As for who joins Logano in the Championship 4 at Phoenix, it’s almost impossible to predict.

Logically, Elliott should’ve been a lock given his status as the regular-season champion and series-best stats in wins, top-10s, laps led and average finish, but that’s simply not the case. The 2020 champ has only notched two top-10s (albeit one a win at Talladega Superspeedway) and 208 points with a 17.1 average throughout the playoffs, only giving him an 11-point cushion heading into Martinsville.

The driver ranked ahead of him — as everyone expected — is an eighth-generation watermelon farmer driving for the second-year team of Trackhouse Racing.

Chastain, the feel-good story of 2022, carried into the postseason, as Chastain is riding back-to-back runner-up finishes with 19 points between him and elimination. Contrasted to Elliott’s line, the driver of the No. 1 boasts an 11.4 average with five top 10s and 264 points earned through eight races.

In his initial postseason appearance, Chastain has driven like a seasoned veteran and put himself in a great spot points-wise entering the semi-final race, yet he called his position going into Martinsville, “comfortably uncomfortable.”

“It’s nerve-racking,” Chastain said. “This is our first run at this NASCAR championship 4 to be decided in Martinsville with Phoenix looming and our first year standing on our own two feet as Trackhouse. We don’t know what we don’t know, and I can take a lot of positives out of that, too. The thought of the success we’ve had this year is incredible and it’s because of this new car — we’ve been open to it.”

The two drivers with nothing to lose are the pair of youngsters in must-win situations: Bell and Briscoe. Bell was able to execute a walk-off win at the Charlotte Motor Speedway ROVAL to avoid elimination, while Briscoe has virtually been living below the points cutoff the entire postseason, but found ways to defeat the odds.

Briscoe, who’s been ridiculed for making it this far into the Round of 8, won the March race at Phoenix. If he were to advance into the Championship 4, the second-year driver could pose a threat to his veteran competitors.

“It doesn’t matter how good or bad you were in the regular season, it matters how you are in the playoffs,” Briscoe said. “It’s no different than baseball, right? The Dodgers were the best team all year long, they get to the playoffs, they don’t perform and they’re out in the first round; it’s no different for our sport.

“Literally, in our format now, you can win the first-35 races, go to Phoenix for the final race, run terribly and you’d finish fourth in the championship. It doesn’t matter that you won the first 35 races. The format that we’re in, it matters how you run in the playoffs and as a team we’ve performed really well.”

Something to keep an eye on as the Cup Series heads to a track touted for tempers and retaliation is Hamlin. The 41-year-old in search of his first championship has been on the receiving end of runs-ins throughout the season.

Sitting five points below the cutoff, Hamlin has been the center of conflict many times with Chastain, and once with Byron, who is plus-five above elimination. Hamlin has provided the fireworks at Martinsville on numerous occasions, most recently last year with Tucson’s Alex Bowman, but there’s reason to believe impending debts may go unfulfilled.

NASCAR’s Next Gen car has been under scrutiny dating back to July, when Kurt Busch suffered a crash at Pocono Raceway and was sidelined with a concussion. This would ultimately end his season and force an early retirement from full-time racing for the former champion.

This safety concern hit a little closer to home for Arizonans at Texas Motor Speedway in September, after Bowman suffered a similar rear-end impact, which ended his playoff bid and prevented him from racing for five weeks. Happily, he was cleared to resume this week and will return to action for the series finale at his home track.

“We just need another version of (the Next Gen car),” Hamlin said. “You don’t need a complete rebuild, but certainly, this car needs some work done to it — which most cars do when they initially come out.”

Added Logano: “When you strap into one of these things, you want the car to be as safe or safer than the previous car. Unfortunately, we took a step back on the safety side and we’ve got two drivers hurt right now. We want to make sure that we at least get the rear impacts better, but all the impacts need to make a gain to get back to where we were with the old car.”

To back assumptions of absent retaliation from Hamlin at Martinsville, Bubba Wallace was issued a one-race suspension for intentionally wrecking Larson at Las Vegas. Although they’ll be racing at much slower speeds in Virginia, there’s just too much at risk with driver safety to take actions into your own hands at this point.

Man arrested in kidnapping of a 7-year-old Tucson girl