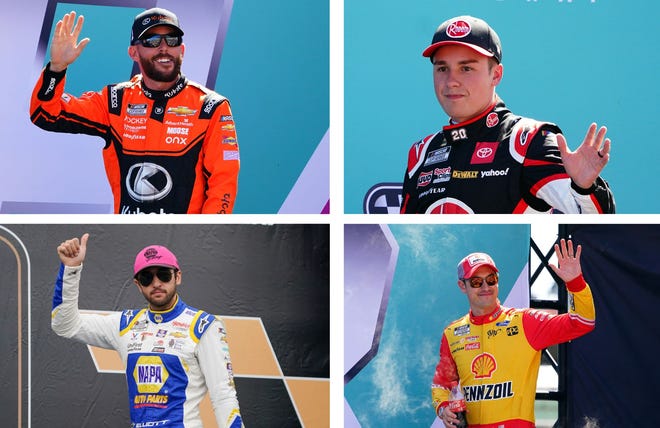 Rolling down Avondale Boulevard, it’s difficult not to become caught up in the excitement radiating from NASCAR’s mecca, Phoenix Raceway.

The world-class facility emulates a Super Bowl vibe due in part to its vibrant baby-blue walls accompanied by thousands of grandstand seats that will be filled on Sunday for the NASCAR Cup Series championship race.

This marks the third running of NASCAR’s championship weekend at Phoenix, by all accounts, the House That Julie Giese Rebuilt. The trailblazer, who played a large role in the transformation of the one-mile track into the prestigious venue it is today, will see her term as track president come to an end once the checkered flag waves. But not before providing fans with the experience of a lifetime.

It feels like only yesterday Kyle Larson completed one of the most memorable comebacks in NASCAR history, courtesy of a scorching-fast pit stop that brought him the 2021 title. But that was yesteryear.

Thirty-five races and nine months of mayhem have provided race fans with one of the most competitive and unpredictable seasons to date, producing a Championship 4 of epic proportions.

Championship 4:Capsules on the drivers competing for the Cup Series title Sunday at Phoenix Raceway

Two former champions, Chase Elliott and Joey Logano, and two first-time contenders in Ross Chastain and Christopher Bell, will vie for the title of 2022 Cup champion. Standing between the quartet of competitors will be 312 miles of non-stop attrition, as they maneuver NASCAR’s seventh iteration of the stock car around Zoomtown USA.

While points aren’t accounted for, teams will have some breathing room with built-in stage breaks after 60 and 185 of the 312 laps are completed. But all that matters is which of the Championship 4 contenders finishes with the highest placement — that driver will hoist the Bill France Cup.

Chastain’s move topic no. 1 every week

By now almost everyone in the world knows who Chastain is. Riding high off momentum from the video-game move heard around the world to advance to the final four, the eighth-generation watermelon farmer has been the feel-good story of 2022.

Although Chastain’s on-track etiquette might be in question throughout the garage, his unwavering desire to be the best without sacrificing who he is what makes him so easy to root for. Should the Melon Man get it done in Phoenix, those champagne showers will undoubtedly be sweeter than ever before.

As has been the case throughout the playoffs, Bell enters the Cup finale with his back against the ropes after all sorts of trouble with the No. 20Toyota Camry. Luckily, the 27-year-old has been in this position two times before, and in that time powered his way to two walk-off wins to get to this point.

Although it’s only Bell’s third full-time season Cup racing, he enters the finale as the only driver in the sport’s history to qualify for the Championship 4 in all three national series. On top of that, crew chief Adam Stevens has the most appearances in the final four over the other strategists in his position, which includes two titles earned in 2015 and 2019 with Kyle Busch. If there’s one thing we’ve learned about the 27-year-old, it’s that it isn’t over until the bell sounds; even if he ends up looking beaten and battered like Rocky Balboa.

In typical Logano fashion, the 2018 champion has been all smiles throughout the week, maybe even more so than normal. He had the luxury of preparing for the title race for three weeks after winning in Las Vegas, while his competitors didn’t know they’d be racing for the Cup until last weekend at Martinsville.

At age 32, Logano has the most experience in every sense of the word. He has nine playoff appearances and has qualified for the Championship 4 on five occasions, on top of having two wins at Phoenix.

Logano began the year pioneering the maiden victory in the Next Gen car, and is now hoping to close the season out in the same fashion, but with a much bigger prize. “22 in ’22” has been the motto all season for Team Penske and the driver of the No. 22 Ford Mustang, and the veteran makes a convincing case as favorite entering the championship.

lucky no 9 class of the field?

Elliott has been the class of the field all season. Tallying a series-best five wins and 20 top-10s, a date with a second title run in Phoenix seemed imminent for the 2020 champion. Following a rocky playoff campaign, his shot at supremacy is in question, which is why the team is seeking a little help from an old friend.

When Elliott won the championship at Phoenix two years ago, his No. 9 was dressed in neon yellow to honor the full-time retirement of teammate Jimmie Johnson. After failure to repeat in the finale last year, neon no. 9’s were added to the front-and-rear bumpers of his Chevy Camaro this weekend to instill some good fortune. As an added bonus Johnson, who is joining Petty GMS Racing next year, will be in attendance for this race, like he was in 2020, which should also provide an inspirational spark.

Plenty to race for rest of field

Throughout the season, parity has been the name of the game in the Cup Series after there were a record-tying 19 different winners. Although the Championship 4 typically find their way to the top in these final races, nothing is a given, especially in 2022.

Five non-playoff contenders went to victory lane in the postseason, casting a lot of uncertainty for the four championship hopefuls, so why not in Phoenix? Reigning champ Larson has just as much to race for as the four title contenders as he chases the owner’s championship for Hendrick Motorsports.

Additionally the King of Phoenix, Kevin Harvick, will be going for an astounding 19-straight top-10 finishes in his 40th start in the desert. Kyle Busch is hoping to go out on top in his final race with Joe Gibbs Racing and M&M’s last go-round as a sponsor in NASCAR.

Finally, Arizona’s Alex Bowman returns to action after being sidelined with a concussion the last five weeks.