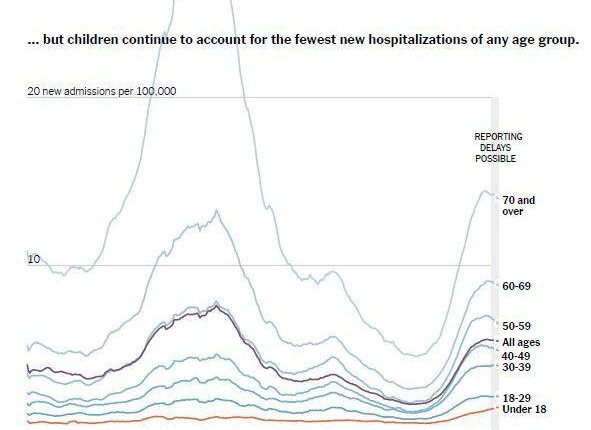 Nationwide vaccine mandates have fueled a new debate about how to contain a persistent pandemic, even as the onslaught of new cases subsides in Navajo and Apache counties.

Schools remain at the center of the debate, with the Delta variant fueling unprecedented clusters of cases on school grounds – and hospital admissions of children infected with the virus fivefold.

Meanwhile, President Joe Biden announced federal immunization mandates that will cover about two-thirds of the U.S. workforce, including most teachers. He also urged schools to make vaccinations mandatory for students over the age of 16.

Numerous studies have shown that middle and high schools form far more clusters than elementary schools, largely because students go through six classes a day – which creates the potential for 180 close contacts per student per day. In contrast, elementary school students stay in a class of 20 or 30 students and schools can easily manage the number of close contacts by controlling the mix of different classes during lunch and break.

Schools in the White Mountains have resumed face-to-face tuition, mostly with no mask requirement for students or staff and no vaccination requirements for teachers.

Apache County has reported 12,743 cases out of a population of approximately 70,000. The county reports about 23 new cases per day and administers about 82 doses of the vaccine. The county has suffered a death rate of 635 per 100,000 and only 27% of the population outside the reserve are vaccinated. About 10% of the 278 new tests each day are positive.

In Navajo County, 19% of those under 18 have had at least one injection – compared to 69% of 65 over 65. This is a sharp departure from most areas where vaccination rates are far higher in the elderly – the are still at a much higher risk of death and serious illness.

The Biden Administration’s assumption of vaccine mandates for federal employees, health care facilities that receive money from Medicare and Medicaid, and companies with more than 100 employees puts the state in direct conflict with federal rules and regulations. At large companies, if people don’t want to get vaccinated, they could instead take a test every week to show they are not infected. It is unclear who would pay for this test – health insurance companies, employers or employees. Many health insurances do not require co-payment for the test. Often times, the test costs $ 100 – or is free at government-subsidized public health clinics. However, people have also taken a shock from medical stickers with surprising bills of $ 1,500 for a test. Federal employees have 75 days to get vaccinated or to expect unspecified consequences.

The federal government is now urging schools to require students over the age of 16 to be vaccinated as vaccines now have full, non-emergency, US Food and Drug Administration approval. The FDA is expected to grant full approval for use of the vaccine for ages 12-16 and for children under 12 before the end of the year in the coming weeks.

Arizona Governor Doug Ducey said the state would “step in” against new federal vaccine requirements. Arizona Attorney General Mark Brnovich, who is running for governor, has suggested that the state will file a lawsuit to block federal vaccine mandates. Both have sharply criticized the new policy as a violation of the federal government and a violation of individual rights.

MP Paul Gosar has also broken vaccination mandates. “There is no law or constitutional provision approved by Congress that empowers the presidency to force any citizen to undergo medical treatment against their will. Mr Biden’s decision to require Americans to take a COVID-19 vaccine is illegal, unconstitutional, and a imprisonment. That is a radial transgression of the government. “

Similar struggles broke out with previous vaccine mandates, including the campaigns that eradicated smallpox and nearly eradicated polio in the United States. 300 million people died of smallpox between 1900 and 1977 when the vaccine eradicated them. Before the first vaccine was developed, smallpox accounted for around 8% of all deaths annually.

Studies have shown that the three approved COVID vaccines are about 95% effective against most COVID-19 strains and potentially 80 to 85% effective against the Delta strain. Even if someone does develop a breakthrough infection, those vaccinated are less likely to develop serious illness or die. From the available studies, it is unclear whether recovery after infection without a vaccine offers comparable protection, especially with the Delta variant. Some smaller studies suggest that recovery from infection from a previous strain provides about 34% of infection from new infection with Delta virus – roughly the same level of protection as a single dose of the Pfizer or Moderna vaccines.

Health officials are alarmed by a sharp increase in school and hospital stays of children with serious illnesses due to the spread of the Delta variant.

One study found that unvaccinated and unmasked middle school students have a 40% chance of contracting infection over time in school, according to researchers from Georgia Tech and North Carolina State University.

States like Arizona with low vaccination rates saw the largest increases in new cases and deaths in both children and adults, according to national tracking data.

The delta variant prompted the CDC to change its recommendations for schools and to support mask requirements indoors when students cannot distance themselves socially. The recommendations were based in part on studies that showed that universal masking in schools reduced infection rates by 800%. The combination of masking, natural ventilation of classrooms and fine filters on air conditioning and heating systems reduced transmission by 3,000%. However, the new Arizona law prohibits school mask requirements.

A new poll last week showed that 59% of likely Arizona voters oppose the school mask mandate ban, while 38% support the ban. The survey included 400 participants with an error rate of plus or minus 5%. The Arizona School Boards Association and the Arizona Public Health Association paid for the survey. The ASBA calls for the state ban on the mask mandate for schools in court. Voters supported vaccine mandates with a smaller margin. Respondents were 42% Republicans, 34% Democrats, 8% Independent, and 16% Undeclared – reflecting the makeup of the state’s most likely voters.

72% of respondents said they were vaccinated, including 52% Republicans and 93% Democrats.

“For the Arizona School Boards Association, the core of the mask problem is local control,” said Ann O’Brien, president of the ASBA board of directors and board member of the Deer Valley Unified School District. “We believe that our member districts and their locally elected school boards should be able to decide what is best for their students and staff. In general, voters support masks, but most of all they support giving our local school districts the choice of whether or not to implement a mask mandate. “

The survey found that 62% were opposed to Governor Ducey’s plan to use $ 163 million in federal COVID-19 aid funds to reward schools that do not require masks. The governor had set aside some of the federal pandemic aid for schools. The grant program required the state to channel the money to low-income school districts that were struggling with the cost of the pandemic and much greater documented learning losses among students. These low-income counties – including most rural schools, including Payson – have already received the maximum grant from the program. The money that the governor withholds due to mask mandates can only go to high-income school districts. Payson is not eligible, noted Gibson.

About 62% of voters agree with the order that the districts that do not take on a mask mandate will be offered money.

About 51% also opposed the governor’s order prohibiting local authorities from requesting proof of vaccination from their employees.

“Vaccines are effective against the Delta variant, but the risk of transmission remains increased in unvaccinated people – especially in schools,” said Will Humble, director of the Arizona Public Health Association. “Once again the public understands this and a majority believes that a private company or local public entity should be able to request proof of vaccination to stop the spread of COVID-19.”