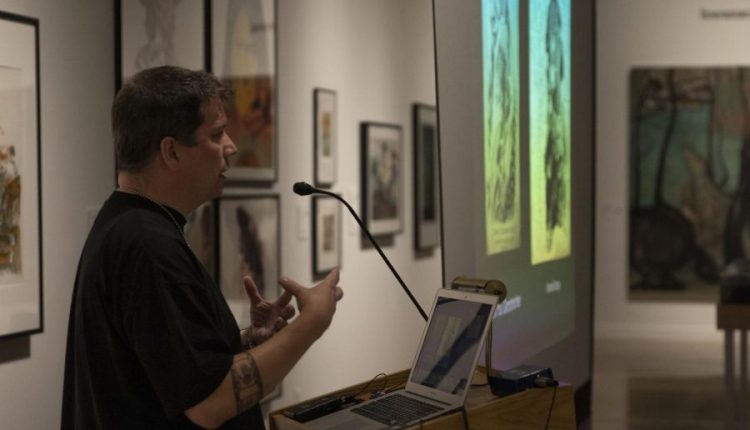 Artist and enrolled member of the Kaw Nation Chris Pappan visited Wichita to discuss his artwork, life experiences, and heritage at the Ulrich Museum on Tuesday.

During the Artist Talk, Pappan explained his experience having heritage with Osage and Cheyenne River Lakota Sioux.

Known for his gouache and graphite collages on ledger paper, Pappan mixes tradition with modern narratives to expand the boundaries of tradition.

The word “Kansas” is named from the people of the Kaw Nation, who refer to themselves as “Kanza.”

However, Pappan did not grow up in Kansas or on current reservation. As an infant, his parents parted ways and he traveled with his mother to live in Flagstaff, Arizona, which welcomed the start of his creative talents.

“I graduated high school there, at Flagstaff, and had some really great art teachers,” Pappan said. “I did a lot of drawing when I was in school. My senior year I ended up drawing in like every class.”

Pappan was quickly recognized for his talent in the arts and began another journey in his life.

“A officer came to my school from the Institute of American Indian Arts in Santa Fe and, at that time we were enrolled with the federally recognized tribes, and began tuition to recruit the school there,” he said.

As he began to attend classes on Saturdays, he further learned about himself as well as his artistic abilities.

“That was a pretty interesting experience,” Pappan said. “I started to connect a lot more with other people’s movements and then started to want to connect more with mine because I didn’t really grow up with that. So that was kinda where my art journey began.”

While attending college close to home, Pappan met his wife, Debra Yepa-Pappan, who grew up living in Chicago, Illinois.

Yepa-Pappan wished to move back to Chicago, and Pappan followed her there, saying it was also “a good opportunity to explore the art world and maybe, hopefully, an opportunity to make a living as an artist.”

In the artist talk, Pappan described his first steps into the art he creates now.

“This was like 1983-1985 and around that time there was a lot of Lowbrow art,” he said. “I was noticing this art movement happening and I was thinking it would be really interesting to see Native artists as well.”

From that realization and on, Pappan explored how to tie his heritage with his art. Eventually, he used further inspiration to get to where he is in his own work and in the art community today.

“One of the huge influences to me within the ledger art were the worlds of Silver Horn, also known as Haungooah,” Pappan said. “He has a lot of collections in Chicago.”

Ledger books introduced the Indigenous people of the Great Plains to ledger papers in the mid-19th century. The paper kept records of connections to the land, memories, and even acts of resistance. Hanukkah was a Kiowa ledger artist from Oklahoma.

“Then I began developing different thematic ideas … looking at collections in Chicago and reading about historical ledger art and knowing there is a story being told,” he said.

Pappan began to explore the idea of ​​intertwining ledger paper and books with his art, as well as challenging the boundaries of tradition by carrying on this new “modern” tradition.

“Rather than just selling portraits … I can tell the story by putting these things together,” Pappan said.

The Chicago-based artist combines multiple mediums in art such as using ledger paper, drawing and painting.

Pappan hopes to expand perceptions of Native people, past and present, through his art and his culture.

Pappan’s newest art adventure will be a commission for O’Hare Airport in Chicago.

“I’m hoping to remind visitors that Chicago is an indigenous place,” Pappan said.