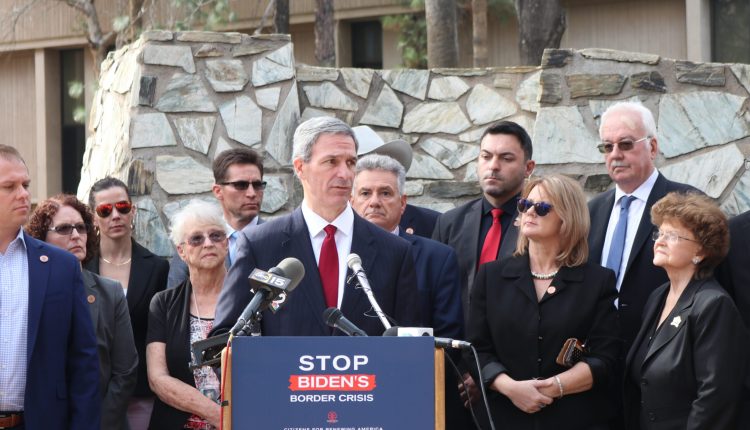 A nativist former top Trump White House official on Wednesday exhorted Gov. Doug Ducey to use Arizona’s National Guard to turn immigrants back at the border.

Ken Cuccinelli, a top United States Citizenship and Immigration Services official in Donald Trump’s administration, said Ducey has the constitutional ability to direct national guardsmen to remove those crossing the southern border. Cuccinelli pointed to the “self defense clause” of the Constitution that prohibits states from engaging in war unless they’re facing immediate danger or active invasion. He said the recent influx of immigrants qualifies as such.

“Thumbprint them, give them food and water and send them back,” he said.

With the U.S. seeing a record-breaking number of encounters at its southern border that is straining Border Patrol agents and the country’s capacity to process migrants, Republican leaders in Arizona and nationally have insisted there is an “open border” and that the influx of migrants — many seeking asylum — are foreign invaders who need to be repelled.

Under Cuccinelli’s approach, immigrants would be blocked from entry and returned immediately, without the due process outlined in U.S. immigration law or regard for federal and international asylum laws.

For nearly two years, federal border agents have been doing just that. The Trump and Biden administration have used the public health Title 42 authority, which effectively closed U.S. borders and allows border agents to immediately expel anyone they encounter at and between official ports of entry, even if they are seeking asylum under U.S. law.

The Remain in Mexico policy, which came back into effect last month, also allows federal immigration agents to send back asylum seekers to Mexico to wait and reside there while their immigration cases in the U.S. are processed.

Since April, Ducey has deployed about 150 members of the Arizona National Guard on a “border security mission” to support local and state law enforcement with camera maintenance and monitoring, and medical operations in detention centers, among other things, according to the Governor’s Office.

Sen. Sonny Borrelli, R-Lake Havasu City, said precedent for involving the National Guard in immigration affairs had already been set by President Woodrow Wilson’s National Defense Act of 1916, which was enacted in response to raids by armed Mexican revolutionaries and U.S. troops being held by the Mexican president. There’s no precedent for a governor commanding national guardsmen to expel migrants.

Rep. John Kavanagh, a Fountain Hills Republican, lamented that the Supreme Court found it was unconstitutional for Arizona to enforce immigration law. Laws like Senate Bill 1070, he said, allow police officers to detain those suspected of illegal entry, but there’s a disconnect when they’re turned over to federal immigration agents.

“The real problem is when we legally apprehend them, the current administration rolls out the welcome wagon and relocates them,” Kavanagh said.

Republicans nationwide have condemned the priorities for enforcement that immigration agents were directed to follow under Biden. While all undocumented immigrants were a priority for arrest and removal under Trump, the Biden administration has said U.S. Immigration and Customs Enforcement must follow guidelines that prioritize those with a criminal record or who pose a threat to national or border security.

Rep. Jake Hoffman, R-Queen Creek, misrepresented crime data to claim rising immigration has contributed to a spike in crime. In fact, the Customs and Border Protection report that he cited describes the previous convictions of non-citizens the agency arrested, not only crimes they had committed after coming to America. Hoffman didn’t provide sources to show that immigrant criminal activity significantly contributed to overall crime rates.

Hoffman instead touted the legislature’s surplus and an estimated $1.8 billion in one-time money available for the upcoming fiscal year.

“There’s not a price too high for your safety,” he said.

Cuccinnelli said it’s not enough to build a physical barrier, but that it’s imperative Arizona take control of the federal borders in the state. He then made xenophobic statements about migrants and said there are gang members, sex offenders and cartel members among them.

“You can build a wall, but if you don’t back it up with manpower, it won’t change the illegal invasion flow,” he said.

The “invasion” terminology has long been used by the nativist movement in Arizona and elsewhere. It has also been used by white supremacist terrorists like the El Paso shooter, who targeted Mexicans at a Walmart, and the Christchurch, gunman who killed Muslims at two mosques in New Zealand.

The claim that the rise in border crossings is not an issue of illegal immigration was a common thread during the conference. Cuccinelli in particular said it isn’t a matter of crafting immigration law, but rather in defending against an “invasive” force.

When asked about asylum seekers, Cuccinelli said that Arizona follows all treaties, including the convention against torture. Since it’s safe to assume Mexico doesn’t torture its citizens, he said, it’s OK to send them back.

One of the treaties signed by the U.S. is the 1967 Protocol, which states that countries must not send refugees back to their country of persecution, or to countries that would do so. The Refugee Act of 1980 also declared the U.S. policy of aiding refugees, including resettlement or repatriation where necessary.

In a 2021 report titled Delivered to Danger, Human Rights First found there were “at least 1,544 publicly reported cases of murder, rape, torture, kidnapping, and other violent assaults against asylum seekers and migrants forced to return to Mexico”

According to reports from the U.S. Customs and Border Patrol, average daily encounters between CBP officers and migrants ranged from 5,500 and 6,900 from March to September. From October onwards, encounters fell to a daily average of  less than 2,500.

“God is the one that designated borders,” Diaz said.

Diaz noted that, in the Bible, entry into Israel required circumcision. In the United States, he said, the requirements are only legal entry and the oath of allegiance. In reality, the process of naturalization can take decades to complete and isn’t always open to all who enter the U.S. legally.

Cuccinelli urged Ducey to take action, not merely promise to. The resources and legislative backing is there, the rest is up to Ducey, he said.

With No End in Sight to Pandemic Life, Parents Find Disruption Is the New Normal