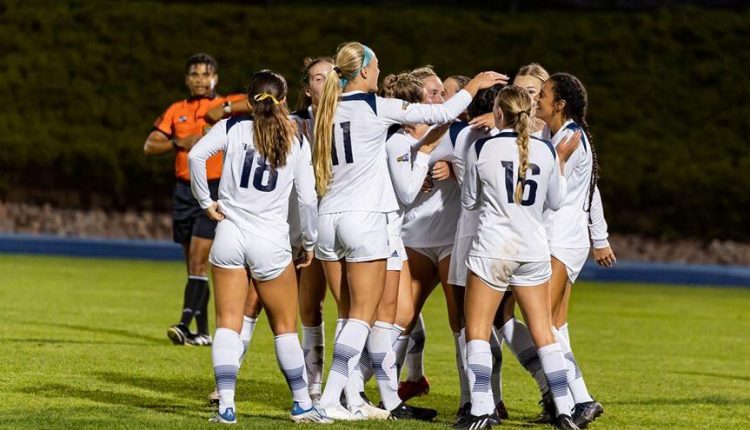 The Lumberjacks were the aggressor throughout the contest, putting up 19 shots total and only allowed Utah State to take five. The Aggies scored both goals in the first half — just 22 minutes apart from each other.

Utah State’s Tess Werts saw her chance in the seventh minute on a quick pass from Sammie Murdock.

The Lumberjacks responded quickly. Mikhail Johnson showcased his footwork just ahead of midfield, sending a pass through two Utah State defenders to find Day Williams. Williams found freshman Avery Ott just in front of her and passed to her. Ott didn’t hesitate, finding the back of the net from the top left corner.

It was Ott’s first goal as a Lumberjack.

“We knew what she was capable of. A freshman coming in and gaining some confidence is awesome and she does that in training all the time. The fact that she’s able to step up for her team is something that we can rally around,” Lumberjacks coach Kylie Louw said.

Jordan Foraker intercepted a pass minutes later and scored to give the Aggies a 2-1 lead at halftime.

Her team down one goal at the break, Louw told the players to focus on defense in the second half.

“My challenge to them was zero shots on goal for the opponent, and I wanted a ton of shots on goal for us, and they did exactly what I asked,” Louw said. “The second half, no shots is a testament to the pressure we put on the back line of Utah State. Our back line was solid as well, it was a true team effort.”

The Lumberjacks capitalized on putting pressure on Utah State’s back line, creating set-piece opportunities while looking for something to tie the game.

Grace Quinn stepped up after winning a one-on-one battle for the ball with an Aggies defender, sending a shot right into the box. Utah State sent a defender in the air in an effort to head the ball out of reach, but the header went wrong and flew into the net for an own goal.

Northern Arizona will be back in action at Lumberjack Stadium Sunday to host Utah Tech at 1 pm, as the Blazers make their way to Flagstaff for the first time in program history.