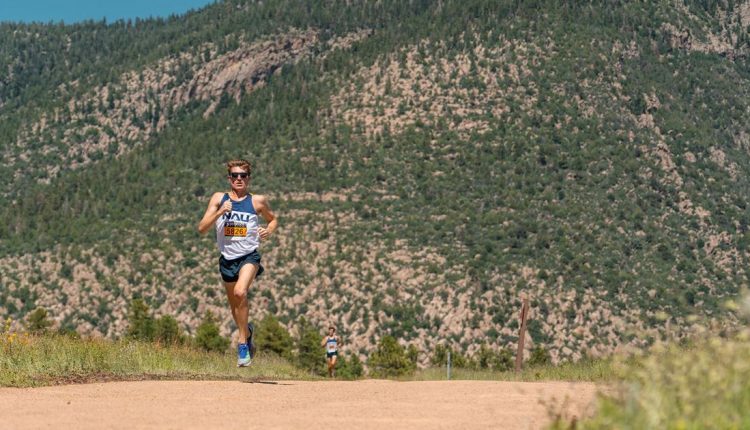 Quax earned his first individual victory of the season at the Coaching Tree Invitational on Friday, finishing 8.4 seconds ahead of the second-place runner. He ran a time of 23:26.3 on the 8K course, leading the Northern Arizona men. He previously ran a time of 22:34.36 on the 4.5-mile course at the season opening George Kyte Classic to finish fifth.

Quax earned both awards for the first time in his career. It is the fourth time in program history that a male athlete from Northern Arizona has been named the national athlete of the week.

Drew Bosley was previously named the conference male athlete of the week earlier this season after his win at the George Kyte Classic.

The Lumberjacks took the top three spots at the meet in Indiana, with Santiago Gomez-Prosser placing second and Kang Nyoak taking third. The team finished with a total of 60 points to place third behind No. 17 North Carolina and No. 23 Georgetown.

Quax and the Lumberjacks will be back in action this weekend as they travel to Stillwater, Oklahoma, for the Cowboy Jamboree on Saturday.

Maddie Shafer was named her team’s first conference offensive player of the week award this season.

The accolades announced Tuesday by the Big Sky come just after Shafer’s seven-point game in which the junior collected two goals and three assists in Thursday night’s 11-0 home match against Ottawa. The effort against the NAIA opponent broke the school record for points in a single match, and tied for first with four other players in assists in a single match.

Along with single-match records, Shafer broke the record for points scored at Lumberjack Stadium in a match, as well as assists.

The midfielder leads the Lumberjacks with nine points through 180 minutes of play so far this season.

This is Shafer’s first time winning Big Sky player of the week in her Lumberjacks career. The Lumberjacks (1-4-2) are heading on the road this week for a road trip to California to take on Loyola Marymount Friday.

The Lumberjacks are coming off their ninth consecutive Western Athletic Conference championship under coach Andy Johns and head diving coach Nikki Kelsey, looking to complete a decade of straight title-winning seasons in February.

Northern Arizona will compete in the annual Blue vs. Gold meet at the Wall Aquatic Center on Oct. 7. The Lumberjacks will then open up their regular season against Ottawa, Arizona Christian and Idaho in Flagstaff on Oct. 21 at 3 pm It will be the Lumberjacks and Vandals’ first matchup since the 2022 WAC championship meet — at which Idaho placed sixth in the conference.

Northern Arizona will face New Mexico in Albuquerque on Nov. 4, followed by a Nov. 5 meet in Las Cruces at New Mexico State.

The Lumberjacks hosted New Mexico last season in Flagstaff, winning 180-115. New Mexico State came to Flagstaff in January, and the teams drew at 132-all.

The swimmers will head to the A3 Performance Invite for the second consecutive season, hosted by Colorado Mesa in Grand Junction, Colorado, Nov. 16-19. The diving squad will host its first Lumberjack Diving Invite of the season from Nov. 17 to 19.

Northern Arizona will take on its first PAC-12 opponents in Tucson for a meet against Arizona and Washington State on Jan. 13. The Lumberjacks will then head to St. George, Utah, for a dual meet at Utah Tech on Jan. 28.

The team is set to host its second Lumberjack Diving Invite Feb 3-4. The following weekend, the Lumberjacks will head to Las Vegas once again for the UNLV First Chance Invite — the invite that gave them the chance to prepare for WAC championships last season.

The WAC championship meet will take place in Pharr, Texas, this season from Feb. 22 to 25. The NCAA Zone E Diving Championships will be held March 6-8 in Seattle.