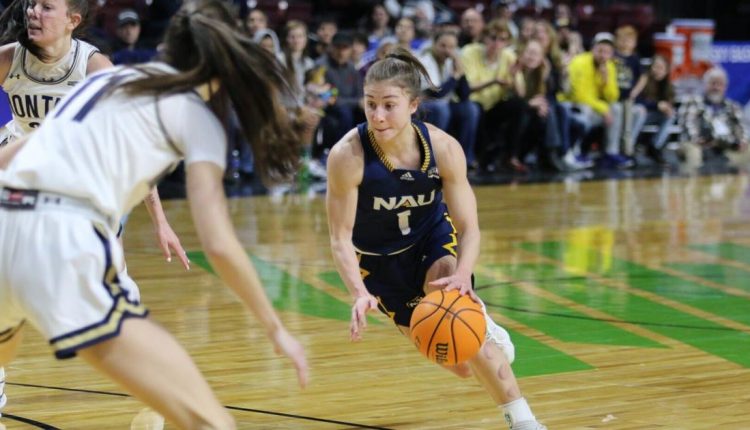 The Northern Arizona women’s basketball team announced its 2022-23 schedule — which consists of trips to several of the top teams in the West listed as opponents.

Four of Northern Arizona’s 13 nonconference opponents reached the NCAA Tournament in 2022, with one other playing in the WNIT and seven total Division I opponents finishing with winning records.

The Lumberjacks will host three games in Flagstaff during nonconference play in addition to their nine Big Sky Conference home games.

The Lumberjacks are slated to open the season with three consecutive games in Arizona in the span of seven days, starting with the season opener in Tempe against the Arizona State Sun Devils set for Nov. 7. A trip to Tucson for a meeting with the Arizona Wildcats follows on Nov. 10 before Northern Arizona makes its home debut against UCSD on Nov. 13.

Arizona returned to the NCAA Tournament as a fourth seed last year, finishing 21-8 overall (10-6 Pac-12). The Wildcats reached the second round of the national tourney after defeating UNLV in the first round.

A quick trip to California for a return game against the California Baptist Lancers is scheduled for Nov. 16 and a home game against Park University – Gilbert on Nov. 20. From there, Northern Arizona heads across the country to the University of the Virgin Islands in St. Thomas for the Paradise Jam.

Scheduled for three games in the Reef Tournament of the invitational at the end of November, the Lumberjacks will take on a pair of programs for the first time in school history, with a third being just the third-ever meeting for the school.

Northern Arizona wraps up its nonconference schedule with two trips to California for games against Cal Poly on Dec. 10 and UC Davis on Dec. 19. Then it makes a quick stop in Nevada to play UNLV on Dec. 21 before returning to Flagstaff before the break for the holidays.

After a week break from competition, Northern Arizona will play Idaho State and Weber State on Dec. 29 and Dec. 31, respectively to begin conference play. From there, the Lumberjacks work through the first half of the conference schedule. Heading to Montana on Jan 5 and Montana State on Jan 7, Northern Arizona returns home to host Portland State (Jan 12) and Sacramento State (Jan 14).

Traveling north to Idaho (Jan 19) and Eastern Washington (Jan 21), Northern Arizona finishes the first half of the Big Sky schedule in Greeley, Colorado, against the Northern Colorado Bears (Jan 28).

After hosting Montana State and Montana on Feb. 2 and Feb. 4, Northern Arizona plays its first Monday game of conference play in Pocatello, Idaho, against Idaho State on Feb. 6. The week on the road continues in Sacramento against the Hornets on Feb 9 and in Portland on Feb 11, with three straight home games to follow against Eastern Washington (Feb 16), Idaho (Feb 18) and Northern Colorado (Nov 25).

The Lumberjacks travel to Ogden to play Weber State for their last game of the regular season on Feb. 27 before heading to the conference tournament beginning March 4.