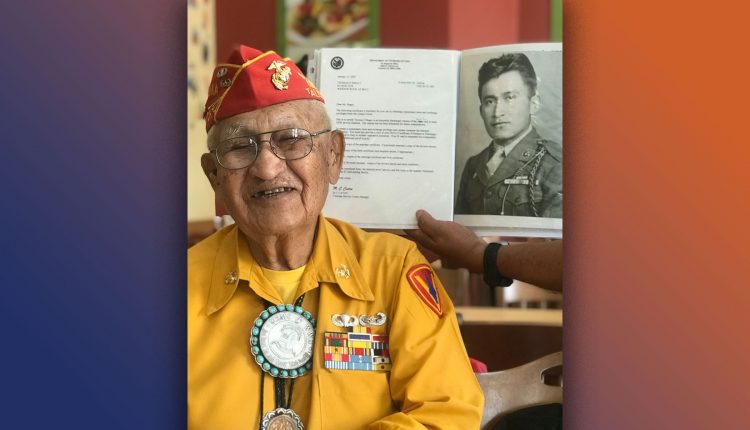 Navajo Code Talker Thomas H. Begay, 98, is coming to Phoenix with his family from Albuquerque, N.M., to share his experience serving in the U.S. Marine Corps. The celebration will take place at the Wesley Bolin Plaza by the Navajo Code Talker statue at 8 a.m. on Aug. 14.

“They should honor the Navajo Code Talkers because they used their language in the war to help the United States,” Begay said in an interview with the Arizona Mirror.

He said that the Navajo Code talkers were able to use their own language to transmit secret messages during the war successfully, and nobody else could do that.

The Navajo Code Talkers were a group of men who served in the U.S. Marine Corps and developed an unbreakable code that was used during World War II. They participated in all assaults the U.S. Marines led in the Pacific from 1942 to 1945, including Guadalcanal, Tarawa, Peleliu and Iwo Jima.

Navajo Code Talker Thomas H. Begay was awarded the congressional silver medal, and he then turned that into a custom bolo tie that he wears often. The medal has the words “Diné bizaad yee atah Naayéé’ Yik’eh Deesdlíí” engraved on it, which translates to “The Navajo language defeated the enemy.” Photo by Shondiin Silversmith | Arizona Mirror

The Navajo Code Talker program was not declassified until 1968, but even then the role the code talkers played in World War II was not widely known.

It wasn’t until 1982 that they received some form of recognition when President Ronald Reagan declared Aug. 14 as National Code Talkers Day.

Begay is also responsible for connecting with congressional representatives back in the 1980s to get Navajo Code Talkers recognized on a national level.

Begay’s son, Ronald C. Begay, a retired U.S. Army lieutenant colonel, said that his dad reached out to congressmen from Nevada, New Mexico and Arizona to initiate the recognition of the Navajo Code Talkers.

“Up to that point in time, there was no formal recognition,” Ronald said. “He took it upon himself to contact the Congressman from those states.”

“In the long run, they were recognized, but it kind of came a little late, many years after the Code Talker (program) was declassified,” Ronald said.

The U.S. Marines originally recruited only 29 Navajo men to be Code Talkers in 1942. They all had to meet the general qualifications of a Marine, but also be fluent in Navajo and English. After the first group proved how successful they were at transmitting code, the U.S. Marines started to recruit more.

For instance, the word Tsidi-Moffa-Ye-Hi means bird carrier in Navajo, but was used as the word for “aircraft.” The initial Navajo code had 211 terms, which grew to 411 as the war continued.