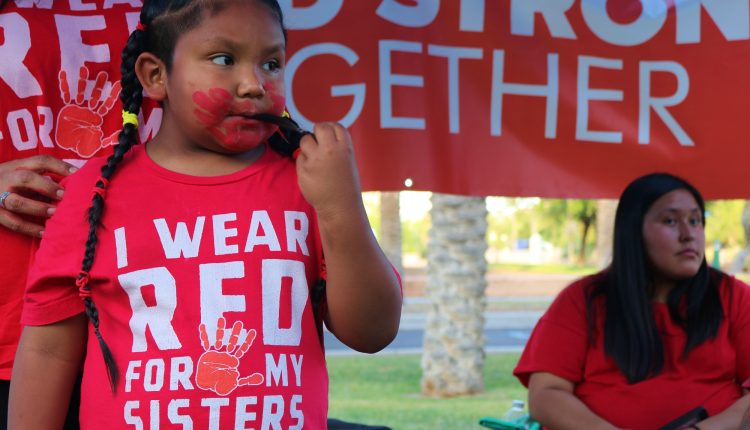 “Many families know the personal heartbreak and trauma of missing loved ones on the Navajo Nation and throughout Indian Country,” Nez said in a press release announcing the executive order. “Multiple jurisdiction systems have historically failed the victims and their families.”

“Reporting, collecting, and sharing missing persons data among various jurisdictions characterizes this problem’s true scope,” he added. “The executive order will set a new tone of hope on this issue that impacts our nation.”

The legislation proposes a three-branch multidisciplinary task force that will include family representation, to develop a holistic approach to addressing the crisis of missing and murdered Navajo men, women and children, both on and off the Navajo Nation.

“As leaders, we need to hear directly from the families and include them in the decision-making process,” Crotty said in a written statement. “The families are the experts on which areas need additional resources such as equipment, training, and funding for searches. They need immediate investment in wrap-around services for long-term counseling and support.”

The Navajo Nation spans parts of Arizona, New Mexico and Utah. There are more than 400,000 enrolled tribal citizens, with about 180,000 living on the Navajo Nation.

In some tribal communities, women face murder rates that are more than 10 times the national average, according to the U.S. Department of Justice.

And the National Institute of Justice found that 84% of Indigenous women experience violence in their lifetime, compared to 71% of white women.

“Historically, investigation and prosecution of Navajo Nation missing persons cases have been entrusted to the FBI and U.S. Attorney’s Office due to potential violations of federal laws,” Phefelia Nez said. “Unfortunately, such deference to federal agencies has often resulted in Navajo families being kept in the dark and their cases not prosecuted.”

The developed guidelines will help officials investigate and locate missing Navajo people on the Navajo Nation in a manner that is empathetic to victims and their families.

“The Navajo Nation Guidelines for Missing Persons asserts that any missing person case on the Navajo Nation is a potential violation of Navajo Nation law and should be treated accordingly,” Phefelia Nez said. “There is a need for proactivity, collaboration, and support within the justice and public safety systems to protect our people.”

“Our deepest hope is that working together will heal, restore, and reunite families,” she said

The guidelines are a component of the Tribal Community Response Plan (TCRP) which was developed to establish solutions to help find missing persons and to help heal victims and families. TCRP stems from Operation Lady Justice and is part of the U.S. Attorney General’s Missing and Murdered Indigenous Persons Initiative.

“The Nihí K’éi dóó Béédahoozinígíí Náalkaa Bikégó Naaltsoos also engages non-tribal partners and agencies in a collaborative response plan and map of the entire criminal justice landscape that Navajo victims and their families must navigate from their first emergency call through the ultimate resolution of a case,” Nez said. “Most importantly, it will guide the Navajo Nation and its partners to build response capacity, collaboration, and support for missing persons and their loved ones.”

The Navajo Nation’s TCRP states that any missing person case impacts K’é, or kinship, and should involve the victim’s immediate family, relatives, and community.

The plan will guide the Navajo Nation and its local, state, and federal partners to build response capacity, collaboration, and support for missing Navajo people and their loved ones. It includes four components: law enforcement response, victim support services, media strategies and the integration of community-based resources.

“The plan will help local, state, and federal law enforcement and social service agencies to work together to bring missing loved ones home,” Nez said. “The purpose is to reunite, restore, and heal our families and communities.”

According to the Navajo Nation Office of the President and Vice President, the TCRP committee leaders developed the guideline coordinating Navajo Nation law enforcement and victim service response to reflect the best interest of victims and their families at the center of each case.

“Creating this plan was a tremendous undertaking for all internal and external partners because it considered the entire Navajo Nation’s 27,413 square mile land base,” Phefelia Nez said. “As the largest land base tribe in the country, the Navajo Nation’s TCRP required extensive collaboration with more partners than any other TCRP in Indian Country.”

Navajo tribal leaders have established partnerships with their local, state, and federal counterparts to establish a systemic response to Navajo families’ call for justice, the Office of the Navajo Nation President and Vice President stated.

“Overall, we are grateful for all partners for their involvement in bringing our loved ones home,” Phefelia Nez added.

Crotty’s legislation was introduced to the Naabik’íyáti Committee on Oct. 20, and the resolution will establish a three-branch multidiscipline task force known as the Naabik’iyati’ Missing and Murdered Diné Relatives Task Force.

The primary responsibility of the MMDR task force is to develop a holistic approach to address the crisis of missing and murdered Navajo women, men, and children.

Once implemented, the findings and recommendations from the MMDR Task Force will be made to the Naabik’íyáti Committee and the Office of the President and Vice President to improve the reporting and investigation processes.

“The Navajo Nation government needs to be accountable when a relative goes missing. Far too many families are navigating a broken criminal justice system, and we demand immediate action,” Crotty said. “We can no longer tolerate the bare minimum for our people because they deserve better.”

“This task force will streamline the process for our Navajo families who want answers and justice regarding their missing relativism,” Crotty said.

The task force will advocate for programs such as a missing person toolkit, a non-profit data institute, victim services, and victim advocates to assist Navajo families. They will also advocate for funding at the federal, state, and tribal levels for transitional housing for victims and an inter-coordinated tribal information management system to track data.

“I recognize the need for a task force on the Navajo Nation because our people have suffered for far too long,” Navajo Nation Council Speaker Seth Damon said. “With our three branches working collectively, we will find a solution to combat the murders and missing cases on and off the Navajo Nation.”

The MMDR Task Force will consist of 12 members. The resolution went through its five-day comment period that ended on Oct. 25 and now waits for a decision from the Naabik’íyáti Committee.