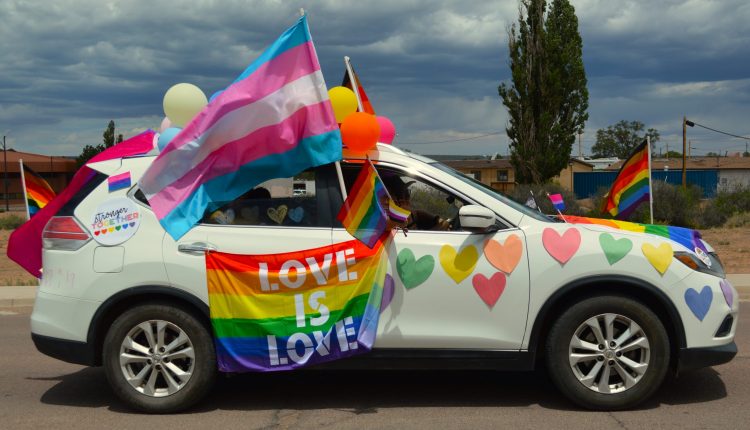 Same-sex marriage is recognized across the United States, but that’s not the case on the Navajo Nation, where the Diné LGBTQ and two-spirit communities are fighting to get the same recognition on their homeland.

Lawmakers on the Navajo Nation are considering a bill that would repeal a ban on same-sex marriage, expand spousal rights to same-sex couples and strengthen families.

In 2005, the Navajo Nation implemented the Diné Marriage Act, which states that marriage between persons of the same sex is void and prohibited.

“This legislation corrects that history and corrects that discriminatory law,” Diné Pride Executive Director and Navajo Nation Council Director of Communications Alray Nelson told the Arizona Mirror. “This law will validate a lot of things for a lot of people.”

The legislation seeks to end the ban on same-sex marriage and repeal the section of tribal law that forbids couples of the same gender from marrying on the Navajo Nation or having their marriage recognized by the tribe.

“This repeal will uniformly recognize all marriages within the Navajo Nation,” the bill states.

Navajo Nation Council Delegate Eugene Tso introduced the bill at the end of June, and it went through its first committee hearing on July 13 with the Health, Education, and Human Services Committee.

This legislation is about family. This is not a threat.

Committee members got to hear from advocates of the bill, including Navajo woman Josie Raphaelito, who is originally from Ramah, New Mexico.

Raphaelito shared how she became an advocate for Indigenous communities nationally and internationally, especially on issues surrounding the LGBTQ and two-spirit communities.

“I stand with my Navajo LGBTQ+ relatives in saying we all deserve equal protection under Navajo Nation law, including the right to have our marriages recognized by our own nation,” she said during the committee meeting.

Raphaelito currently lives in Buffalo, N.Y., with her wife of five years. She hopes to one day move back to the Navajo Nation to be closer to her family and community, but she doesn’t see that happening until the ban on same-sex marriage is repealed.

“I truly want to be able to return home to Dinétah and know that my wife and I are protected and legally recognized as a married couple,” Raphaelito told the committee. “With all the hate, violence, and attacks on human rights in the United States, I want to know that we are safe once we move back home.

“Safe to live free from discriminatory laws that use colonize theories of gender and love and diminish our ways of life and knowing as Diné people,” she added.

Dr. Jennifer Denetdale, a professor at the University of New Mexico and chair of the Navajo Nation Human Rights Commission, encouraged the delegates to vote for the measure.

Denetdale said her research has found that the Navajo people have traditionally acknowledged more than one gender.

“This is reflected in our creation narratives about the Nádleehí who brought together the men and women after they had an argument,” Denetdale said.

Navajo creation stories speak of the Nádleehí, who is considered the third or multiple genders, and they are talked about in stories surrounding the separation of the sexes.

Traditionally, the Nádleehí were considered mediators and negotiators within Navajo society, according to Denetdale. They were also skilled at many things, like weaving and holding sacred ceremonial knowledge.

“Our LGBTQ+ (and) two-spirits look to this story about the Nádleehí to affirm their place in our families and communities,” she said.

The committee discussed the bill for more than 40 minutes before members voted.

One of the opposing votes came from Navajo Nation Council Delegate Paul Begay Jr. He addressed the committee in both Navajo and English, sharing his views on the proposal. He talked about how he does have family members who are part of the LGBTQ community and he sees them no differently, but he couldn’t vote in favor of the bill.

Begay said he could not support the bill because what it proposes goes against values bestowed by the Holy People, including that a man and woman should coexist together.

As part of the Navajo way of life, it is believed that the Holy People taught the Diné people how to live and conduct their everyday life.

“We all have our own thoughts,” he said. “I chose to go with the law of the Holy People.”

The bill received the support of only one delegate and was opposed by two others; the other three members of the panel didn’t vote. In the Navajo Navajo government, that doesn’t doom the measure: It will still be considered by three other committees, and its ultimate fate rests with the full council.

The proposal would also amend provisions in tribal law about spousal rights to property, employee benefits under the tribal government, and adoption rights.

During the committee meeting, Raphaelito highlighted how marriage equality is about more than the right to love who one loves.

“It is a recognition of our full and true identity as Diné people,” Raphaelito said. “It is the right to be seen by our people and recognized as five-fingered beings capable of love.”

I truly want to be able to return home to Dinétah and know that my wife and I are protected and legally recognized as a married couple. With all the hate, violence, and attacks on human rights in the United States, I want to know that we are safe once we move back home.

The bill states that repealing the ban will promote strong families and family values within the Navajo Nation because it will ensure same-sex couples are included and recognized in promoting strong families through adoption if they decide to adopt.

This is the second time Tso has sponsored legislation to legalize same-sex marriage on the Navajo Nation in 2022. The first bill did not make it through the legislative process, and Tso withdrew his support of the bill in April to re-work the proposal. The result of that work is the current measure.

Nelson said the feedback on that bill was geared toward how the Navajo Nation Council should not be the entity to decide if the law should be changed.

There was talk after the bill was first proposed earlier this year that the topic should be put to a vote of all Navajo people, Nelson said, but the bill sponsors and supporters disagree.

“This legislation is about family,” he said. “This is not a threat.”

Nelson said the bill proposes to redefine domestic relations when it comes between a man and a woman, which “will empower Navajo women.”

“This legislation will not only empower our women, but it will also ensure that everyone on the Navajo nation can choose to love who they love,” Nelson said.

The proposal would also legalize same-sex marriage on the Navajo Nation, allowing same-sex Navajo couples to get married on tribal land. But it would not affect traditional Navajo wedding ceremonies, which would remain limited to marriages between a man and a woman.

“Traditional Navajo society places a great importance upon the institution of marriage and believes that the elaborate ritual of marrying using the traditional method is believed to be blessed by the ‘Holy People.’ The blessing ensures that the marriage will be stable, in harmony, and perpetual,” the bill states.

But the legislation would grant recognition to Navajo same-sex couples who are already married. Those couples have their marriage recognized by the federal and state governments, but not by the Navajo Nation.

“I hope that, in the future, that my husband and I can come home and that we can live among our family,” Nelson, who lives off of tribal land in Gallup, N.M., said. “To have tribal law to protect our rights as a couple but that’s not gonna happen until this legislation passed.”

Yuma Boys and Girls Club to Open in August