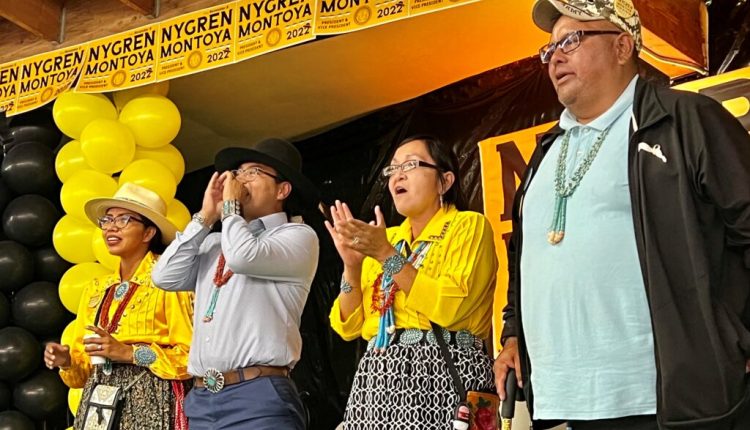 All 110 chapters reported unofficial results after 11 p.m. on Nov. 8, showing Nygren with 34,568 votes and Nez just 31,069 votes, according to the Navajo Election Administration.

Hundreds of supporters gathered with Nygren at the Navajo Nation fairgrounds to watch the results come in on election night. He sat on stage throughout the night alongside his wife, State Rep. Jasmine Blackwater Nygren, his running mate Richelle Montoya Chee, and her husband, Olsen Chee.

“Yes, a Buu is going to be your next Navajo Nation President,” Nygren said during his victory speech. He said that should serve as a reminder that it doesn’t matter what a person’s name is or if they’re only half Navajo, as he is.

“What matters to the Navajo people is that you have a heart to serve them,” he added.

Nygren thanked his supporters in both English and Navajo for their support as part of his victory speech inside the Navajo pavilion on the Navajo Nation.

“You all have put so much faith in me, and my campaign, and my running mate Richelle Montoya,” he said.

Nygren also talked about how they made history on election night because a Navajo woman will be vice president for the first time.

Yideeską́ądi Nitsáhákees, meaning “Thinking For The Future” in Navajo, was Nygren and Montoya’s campaign slogan.

Nygren said it was a tough race, but his team handled it and that throughout his campaign, he made it about the Navajo people.

“Tough races make tough leaders, right?” Nygren said to his supporters. “We want to do the things that are tough.”

On election night, Nez also set up at the Navajo Nation fairground. His camp was a little more somber as the election results continued to roll in throughout the night. Nez showed up later in the night and thanked his supporters for the last four years.

The Nez campaign did not release a statement about the election results or the newly elected president.

Navajo Nation Board of Elections Supervisor Chair Melvin Harrison said the election went smoother than the primary, though there were a handful of machines that malfunctioned.

Harrison has been on the board for six years, and said he was surprised by the election results because, during the primary, Nez led the crowded field.

“With the results tonight, we have a new president,” Harrison said. “A lot of people are surprised, but also happy that we have a new young man as the Navajo president.”

The unofficial results go through a grievance period until Nov. 18, and then the Navajo Nation Election Administration will certify the results after that date if no grievances are filed.

The inauguration of the Navajo Nation General Election Officials of 2022 will be on Jan. 10, 2023.