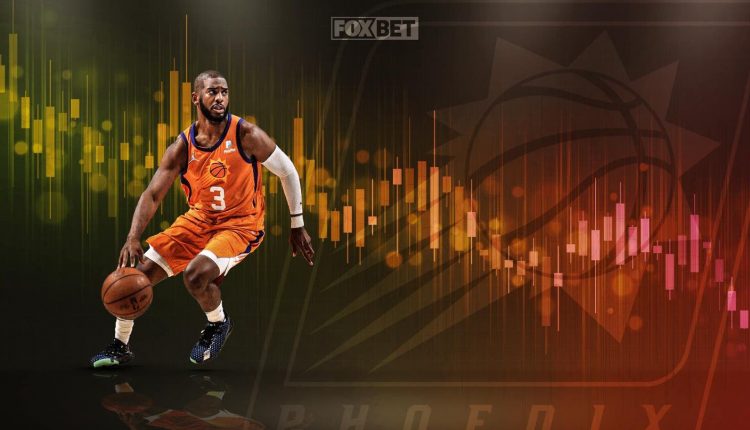 NBA odds: How the Phoenix Suns’ odds have moved throughout the season

An aging superstar leading a young team whose preseason NBA title odds didn’t have them as the favorites. That was the narrative surrounding Phoenix at the beginning of the season.

Fast-forward to the first week of the NBA playoffs, and the Suns — a squad that finished the regular season with a league-best 64-18 record — are now the favorites to win the NBA title.

Not only did Phoenix finish on top of the regular-season standings, according to FOX Sports Research, the red-hot hoopers shot their way to a 45-37 record against the spread (ATS), which was tied for the seventh in the Association.

Since everything seems to be coming up sunshine for Chris Paul and the reigning Western Conference champs, let’s take a look at how their odds to win this year’s NBA title have moved all season at FOX Bet.

THE SUNS’ CHAMPIONSHIP ODDS THROUGHOUT THE SEASON

At the beginning of the season, FOX Bet had Phoenix’s odds to win the NBA title at +1500. Phoenix opened up the year with a 1-3 overall record before turning their fate around and going on an impressive 18-game winning streak from October to December.

Over their December stretch, the Suns dropped only four games, and by the time the new calendar year rolled around, their odds to win it all had shortened to +800.

Phoenix kept up its winning ways through January and February, losing only four contests during that span. Going into the All-Star break, the Suns had one of the shortest odds at FOX Bet (+450) to hoist the Larry O’Brien trophy . And Phoenix hasn’t looked back since. As a matter of fact, when it comes to the anatomy of NBA champions from the last 30 years, this year’s Phoenix Suns fit the profile.

Much of the squad’s success can be attributed to the genius of Coach of the Year Monty Williams. And on the court, it’s been the brilliance of Point God Chris Paul, along with Devin Booker, leading the charge.

When it comes to what Phoenix has been able to accomplish, FOX Bet sports trader Dylan Brossman points to consistency.

“The Suns did not start the season as favorites, but their consistency throughout the season caused their odds to shorten every month since October,” Brossman noted. “In fact, the Suns only lost back-to-back games on four occasions.”

The team’s record was so stellar during the regular season that by the time playoffs started, the odds for the Suns to dethrone the Bucks as the new champs had shortened all the way to +260 at FOX Bet. Now, with playoffs underway, Phoenix is ​​favored to win the title at +275.

While the Suns have looked like the best team in the league for some time now, injuries are always a concern, especially in the postseason. Unfortunately for Phoenix, Devin Booker aggravated his hamstring in Game 2 against the Pelicans. The uncertainty surrounding Booker did have an impact on the overnight title odds, opening the door for the Golden State Warriors.

Prior to Game 2, the Suns were overwhelming favorites to win it all at +200, while the Warriors sat at +475. FOX Bet quickly shifted both teams’ championship odds overnight, with Golden State’s number shortening all the way to +370.

“Perhaps the only thing that can derail the Suns this postseason is injuries,” Brossman continued. “But if thirty-six-year-old CP3, Booker the rest of the Suns’ roster can remain on the court, it is hard to imagine that their first-round opponent Pelicans — or any team for that matter — will beat them four times in seven games.”

Are you ready to lock in on Phoenix to take home the title? Head over to FOX Bet to get in on the NBA betting action now!

Download the FOX Super 6 app for your chance to win thousands of dollars on the biggest sporting events each and every week! Just make your picks and you could win the grand prize. Download and play today!

Get more from National Basketball Association Follow your favorites to get information about games, news and more.