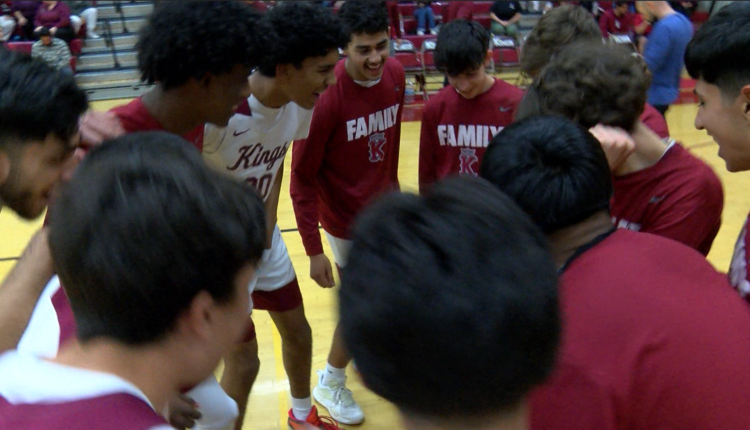 YUMA, Ariz., (KYMA, KECY) – Friday the 13th did not bring the spooky to Yuma, but it did carry the dramatics of wild finishes at Kofa High School.

What better way to celebrate the 4th annual Kofa Hall of Fame Induction weekend than a couple of games with cross town rival Yuma skipping down the street?

Better yet, how about a double dose of one point games?

That’s exactly how Friday shook out, starting on the girls side where a late Kofa comeback ended in a physical, back-and-forth free throw affair in the final quarter.

After the Kings snuck ahead by one point late, a couple of Alyssa Franco free throws put the Criminals back in front before Kofa’s Amana Montiel tied the game with a free throw of her own.

And then Legend became legendary. Yuma’s Legend Redmond banked in a jumper with just over a minute to play. After each team traded possessions, Kofa had one chance with just seven seconds to go. Shantal Montiel’s desperation heave at the buzzer did not go and Yuma stole the win by one, 36-35.

In the second game of the night, it got even better.

The Kings and Criminals went strike for strike in a wild game, ending in an even more wild finish.

With just seconds left and down by one, Kofa’s Joaquin Anaya stormed to the hoop and finished through contact at the buzzer to give the Kings their second win over Yuma this season.

Anaya led the Kings with 18 points and 10 rebounds, while Francisco Jimenez added 10 points in the win.

Although not as thrilling as the events at Kofa, both Yuma Catholic hoops squads dominated on their home floor once again.

The Lady Shamrocks came in as the No. 3 team in 3A girls basketball in a meeting with ALA West Foothills. It took the Guardians until the second quarter to score one bucket, trailing 29-0 to the Rocks.

The rest is history as Amanda Wiley once again led the way with 17 points, followed by Rian Martinez and Reese Sellers each with 12 points on their birthday. Yuma Catholic running away with a 51-16 win to deliver the birthday victory to the two seniors.

It was the same story for the Shamrock boys, who ended the night at 16-3 after routing ALA West Foothills 66-35. Landen Urquijo led the way with 16 points, followed by Sebi Patane and Fernando Vasquez each with 14 in the win.