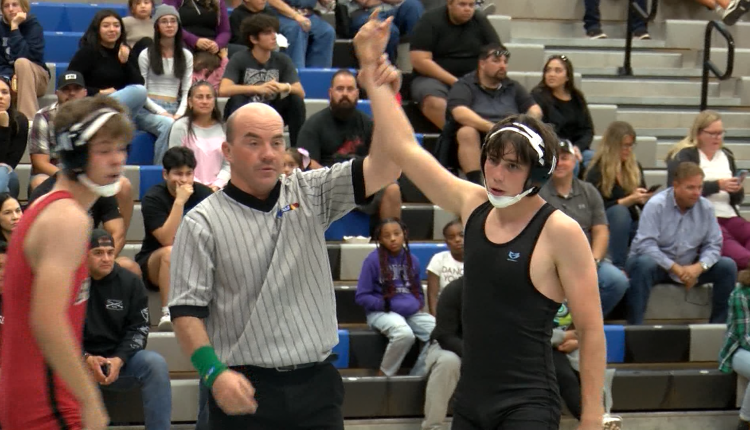 NBC 11 Sports: LOI signing, plus wins across the board for Yuma, Gila Ridge and Kofa winter sports

YUMA, Ariz., (KYMA, KECY) – It was a busy day at Gila Ridge High School – starting with Emma Butler’s Letter of Intent signing to join a college Stunt & Cheer team, and ended with four total wins on the mat for the boys and girls wrestling squads.

The girls squad beat Red Mountain 36-30 and Tucson 36-24 behind an undefeated start from team captains Kennedy Farrar and Madison Bocanegra.

Yuma wrestling continued their unbeaten start on both boys and girls sides, as well – the boys beating Deer Valley 40-30 and Prescott 34-32, even using Divina Diaz from the girl’s team to help secure the win against Prescott.

Rounding out the night was the Kofa Kings boys and girls basketball teams – each beating Lake Havasu.

The boys, now 2-0, pulled out a tight 59-57 win in overtime, led by double-doubles from Joaquin Anaya and Calvin Barber. Anaya notched 14 points and 13 rebounds, while Barber added 14 points and 10 rebounds. Adrian Gamez pitched in 14 points and seven assists and Francisco Jimenez added 11 points.

The girls were led by sisters, Shantal and Amani Montiel – who combined for 30 of the Lady Kings 33 points in a 33-27 win at home in Rillos gym. Mya Brown also added eight rebounds and five steals, as well as they get their first win of the season.

Her Apartment Might Have Put Her Son’s Health at Risk. But ‘I Have Nowhere Else to Go.’