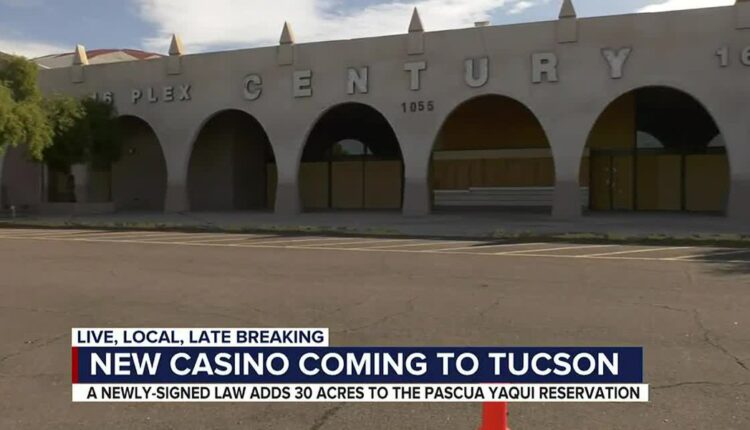 Around 30 acres were added to the Pascua Yaqui reservation land near Grant and Interstate 10. The tribe will work on improving the area along with establishing a new casino.

This is a big step toward improvements in the community on the Old Pascua Land, but it is also going to bring an economic boost to Tucson. The Old Century Park 16 Movie Theater is the proposed spot for the new casino and that’s going to bring new jobs and more business to the city.

“It’s a game-changer for the tribe,” said Kim Van Amburg, CEO of Casino Del Sol. “Without the passage of that bill, there was no possibility of casino development at that intersection, and now, although there are a few extra steps the tribe has to take, the land will be put into trust.”

The Pascua Yaqui Tribe has been working on this legislation for about 18 months. Now that it has been officially signed into law, they’re working out the details on what it will take to build a new casino near I-10 and Grant. The new casino will bring more business to Tucson’s west side and is expected to create 500-600 jobs.

“It means jobs, not just for tribal members in that area, but for other Tucsonans who would like to have a job close to central Tucson,” she explained. “I think from an economic development and what that intersection looks like, I think it’s going to be a beautiful improvement.”

And it will be a potential money-maker.

According to the Arizona Department of Gaming, tribal gaming has contributed nearly $2 billion dollars to the state, cities, and counties since the 2004 fiscal year.

“We’ve always lived there and it’s time to give back and take care of the City of Tucson, the county, and the state,” said Pascua Yaqui Chairman Peter Yucupicio.

88% of the contributions go to the Arizona Benefits Fund which is transferred to the Instructional Improvement for schools, the trauma and emergency care, tourism, and wildlife conservation.

Right now, the focus is on protecting the land and improving it by adding new housing and protecting religious buildings that sit on the Pascua Yaqui ancestral land.

″Long term, you have to look at all the west side coalitions, barrios, we have to look at all of the businesses there,” Yucupicio said. “For us, when you start looking at taking care and beautifying the whole area there of the city of Tucson, I think it will be a beautiful thing to watch and see how we evolve.

Traffic is one of the big concerns in the area along with keeping sacred religious space separate from the casino space.

Officials said this is a complicated site, which has pushed back some of the planning. The goal is to break ground in the next 12-18 months, giving the greater Tucson area its fifth and most centralized casino.