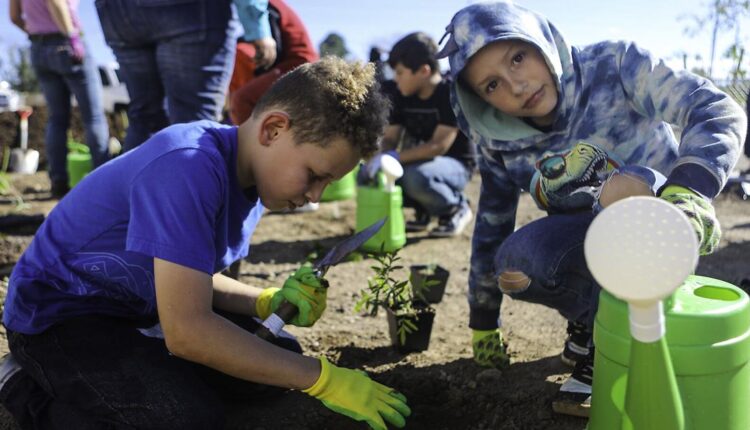 Flagstaff schools continued to develop a post-pandemic normal in 2022, with precautions shifting, and local traditions and practices returning. While the Flagstaff Unified School District (FUSD) debuted a new school building and started several programs, other schools celebrated milestones as they worked to serve their students better.

The previous year had seen flooding enter the Killip Elementary School building only a week after the start of the 2021-2022 school year, leading it to finish out the year across the city in the former Flagstaff Middle School building.

Construction on a new building for Killip was already underway at the time of the flood, and the new school was finished in time for the start of the 2022-2023 school year.

The project first broke ground in March 2021 and cost a total of $22.6 million, mostly using funding from a bond passed in 2018. In November, voters approved a new $100 million bond for the district, part of which will be used on similar replacement projects for Kinsey and Marshall elementary schools.

Photographer Jake Bacon captured this video of flooding inside Killip Elementary School on Tuesday following heavy monsoon storms. Dismissal has been pushed back 30 minutes so that flood waters have time to recede, making it safer for children to go home.

Masks continued to be a focus of COVID-19 response in schools at the start of 2022. In February, students across FUSD arranged a “no-mask Monday” protest, coming to school without masks and politely refusing to wear them.

It wasn’t until the Centers for Disease Control and Prevention (CDC) updated its COVID community level metrics at the end of the month, however, when FUSD’s board had a special meeting, voting 3-2 to encourage rather than require masks at district locations. Other Flagstaff schools followed, moving mask requirements to recommendations.

Flagstaff schools are still encouraging COVID safety measures and have response plans in place for the current school year — though these look different from earlier in the pandemic.

The AASA replaced in the spring the AZM2 (formerly called AZMERIT) for third- through eighth-grade testing. After the state science test, AzSCI, was administered as a field test in the previous school year, fifth-, eighth- and 11th-graders took the full test for the first time.

For high-schoolers, assessments are based on several versions of the ACT.

Schools across Flagstaff have been continuing their intervention work as well as assessments and benchmarks, adding new efforts to address the pandemic’s potential effects on learning.

Schools across Arizona received letter grades in November from the Arizona State Board of Education (AZSBE) for the first time since 2019. AZSBE had not published updated scores in 2020 or 2021 due to the pandemic.

In Flagstaff, the scores showed improvement or similar numbers to 2019 at most schools, with a few rising multiple letter grades.

Flagstaff Arts and Leadership Academy (FALA) celebrated its 25th anniversary in April with a weekend of events including performances from students, staff and alumni.

The public charter school first opened to high-schoolers in August 1996. Its founder, Karen Butterfield, was a Coconino High School art educator at the time (having previously been FUSD’s art coordinator) and began drafting a vision for the school once legislation to bring charter schools to Arizona passed in 1995.

The school has since expanded to include students in grades six through 12, with ADE data listing an enrollment of 287 students in Oct. 2021

In January, the Arizona State Board of Charter Schools approved Montessori Charter School of Flagstaff’s switch to nonprofit status.

The school had been one of about 25 for-profit charter schools in Arizona (of a total of 600-700 charter schools), according to director Ike Ozis, who hoped the change would lead to the school’s continued success.

The change was proposed for the school’s “long-term sustainability,” particularly in regards to its leadership structure. Ozis said the pandemic had shown school leadership how it hoped to be able to approach future crises and the change was a move in that direction.

Montessori now has an independent school board of five parents, rather than a corporate board.

In July, FUSD approved a climate action report that will be used to guide climate goals and response going forward.

The board had passed a resolution with priorities in expanding its climate response in August 2019, and, in November 2021, it formed a climate committee in response to a presentation from Flagstaff’s sustainability director on ways FUSD could contribute to the city’s carbon neutrality plan.

The report is meant to help FUSD become an active partner with the city in responding to the climate emergency and looks at ways the district can lessen its impact. Goals include identifying and monitoring a greenhouse gas reduction target, developing energy efficiency standards for new projects, preparing schools to be more resilient, and discouraging student engagement in climate action and education.

The 2021-2022 school year was FUSD’s first applying a restorative practices program to an initial cohort of nine schools. At a presentation to the board in March, school staff involved in implementing the program said they had seen benefits in using the practice for problem-solving and conflict resolution.

Restorative practices is an alternative approach to school discipline meant to be less retributive than traditional methods. As the district’s coordinator explained, a restorative approach focuses more on repairing the harm done, while the traditional approach centers on rules and punishment.

Practices happening regularly in the first cohort include peace corners, restorative conferencing and mediation, reintegration and a variety of circles used as a communication tool. The program has continued to expand, adding new schools and techniques in the current school year.

POL events were still hosted virtually this year, with students from across Arizona then the United States, recording their recitations of three poems to be judged live at the event.

After placing in the top three of his semifinal round in May, Landa Samano competed against eight other state winners in the June finals. He won a $5,000 prize for his third-place finish and $500 for his school to purchase poetry materials.

After switching to a virtual format due to the pandemic, Coconino County’s spelling bee was one of the last school traditions to return in-person in February.

The top spellers at 12 Coconino County schools competed at Coconino High School for a chance to move on to the state competition. After competing in several rounds, eighth-grader Nathan Finney, representing Flagstaff Home Educators, won by correctly spelling the word “defiant.”

Finney went on to compete in the state spelling bee in March, missing the word “bittern” in the sixth round. He placed 14th out of 27 Arizona regional competition winners overall.

Pursuit ends in rollover crash on I-10 south of Phoenix