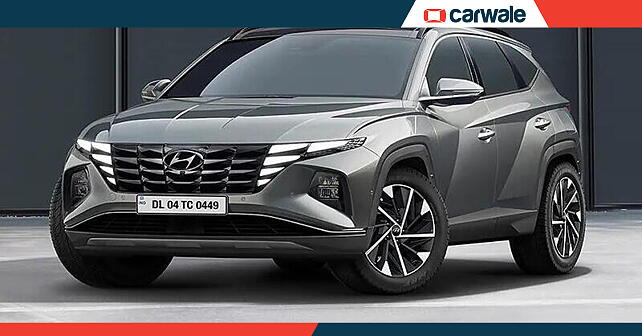 – Prices likely to be announced next month

– Expected to be offered in petrol and diesel powertrain options

Hyundai India is all set to take the wraps off the new-generation Tucson. Slated to be unveiled tomorrow, the flagship SUV will boast fresh exterior styling, a revamped cabin, and new features. Here’s what to expect from the new Hyundai Tucson.

First up, the Hyundai Tucson will be the second SUV after the Venue to dawn the new ‘Sensuous Sportiness’ design philosophy. At the front, the Tucson will wear the new ‘parametric-jewel’ themed grille with integrated DRLs. The headlamps will be mounted vertically on the bumper while the fog lamps are most likely to be given a miss. Besides that, the Tucson will get sharp cuts and creases on the side along with new design for the alloy wheels.

At the rear, the profile will feature sporty split tail lamps that will be adjoined by a light bar. The rear bumpers will be reprofiled to include a skid plate and horizontally-mounted turn and reverse lights.

The cabin will be thoroughly updated and is expected to include features like a digital instrument cluster, a four-spoke steering wheel, an electric parking brake, and new gear switch replacing the conventional gear lever. The interior will be draped in new upholstery.

Under the hood, the new Hyundai Tucson is expected to be powered by the same 2.0-litre petrol and diesel engines as the outgoing model. Transmission options including a six-speed manual unit and a six-speed automatic unit are likely to be carried over as well along with an all-wheel-drive configuration.

When launched in the coming month, we expect the new Hyundai Tucson to be priced from Rs 23 lakh (ex-showroom) onwards. It will rival the likes of the Jeep Compass, Citroen C5 Aircross, and Volkswagen Tiguan.