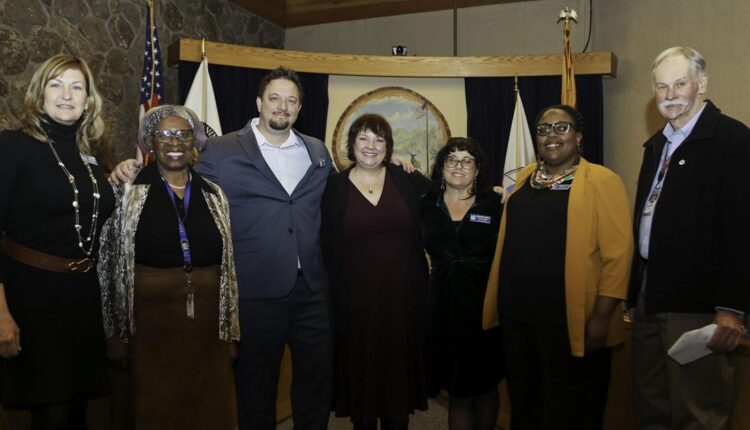 Council chambers were busier than usual on Tuesday when more than 100 people attended the swearing-in ceremony for Flagstaff’s new mayor and members of the city council.

The atmosphere was celebratory, punctuated by rounds of standing applause, as the elected officials took their vows and assembled at the dais.

Under the leadership of newly elected Mayor Becky Daggett, the new city council consists of returning members Austin Aslan (now serving as vice mayor as the highest vote-getter in November), Jim McCarthy, Miranda Sweet and Khara House, who was appointed as an interim council member in May.

Lori Matthews and Deborah Harris, meanwhile, are fresh faces to the dais.

The atmosphere in Flagstaff city council chambers was celebratory following the swearing-in of the new council and mayor Becky Daggett.

Welcoming the new council is a “joyous” occasion, said city manager Greg Clifton. He said he sees the group as a good spread of new and experienced leaders.

“I think we have a great diversity of thought at the dais,” Clifton said. “From a manager’s point of view, we have the element of continuity — which is always good — along with some fresh thoughts coming to the dais.”

For Daggett, the excitement of onlookers during the swearing-in ceremony made for an emotional welcome.

“I was so overwhelmed,” she said. “When people started clapping, I wasn’t expecting that.”

Daggett added that she was looking forward to sitting down with staff in the coming weeks to begin strategizing around her top priorities: Flagstaff housing and climate action.

She also expects to be doing some community outreach.

“I’m really just going to be getting out there and introducing myself to people who don’t already know me,” she said.

Tag teaming with Daggett is something to look forward to, said Aslan, who also noted that his new role as vice mayor is “fairly ceremonial.”

Lori Matthews raises her hand as she is sworn into office as a member of the Flagstaff City Council on Tuesday afternoon at City Hall.


He sees the elevated status as an opportunity to carry his message — primarily that his re-election represents a voter “mandate” around his platform issues of climate action and “Big Shift” transportation policies.

“I think this Council is going to be a strong voice moving forward,” Aslan said. “We’re playing catch up on topics and issues we should have been addressing more aggressively a long time ago.”

Sweet was also excited for the new city council, calling the welcoming “jovial.”

“The energy is really good today,” Sweet said. “And I’m looking forward to seeing what we can accomplish for the next couple of years.”

The clock is already ticking, said newly elected Harris. As the recipient of the fourth-highest amount of votes, instead of a four-year term Harris was awarded the abridged two-year term left vacant when Daggett dropped to campaign for mayor.

Khara House raises her right hand as she is sworn into office as a member of Flagstaff City Council Tuesday afternoon at City Hall.


“I’m going to be working really hard in those two years to accomplish some of the things that I ran on,” Harris said.

Flagstaff’s housing troubles are at the top of her to-do list.

“If we don’t get a handle on this housing thing, all the rest of it doesn’t count,” Harris said.

To that end, Harris will likely find an ally in House, who has been involved with the Flagstaff housing commission since before her appointment. Now as a fully fledged council member, housing is also one of her top priorities. She’s also been reflecting on what it means to transition from appointee to elected official.

Austin Aslan raises his right hand as he is sworn into office as a member of the Flagstaff City Council Tuesday afternoon at City Hall.


“I stepped into the appointment role in order to serve Council,” House said. “And now as an elected, I’m really serving the people of Flagstaff.”

Matthews, who is also starting a four-year term, said she found the act of swearing-in exciting and “kind of scary.”

“We’ve got a lot of stuff on our plate and we’re ready to tackle it,” Matthews said. “I think together, we’re going to pull a lot of great resources and experience and background and I’m looking forward to it.”

That optimism is somewhat tempered in McCarthy, who has two more years left in his term.

“We’re not going to agree on everything,” McCarthy said. “But I’m optimistic that we’re going to have a council that respects each other, listens to each other and hopefully agrees once in a while.”