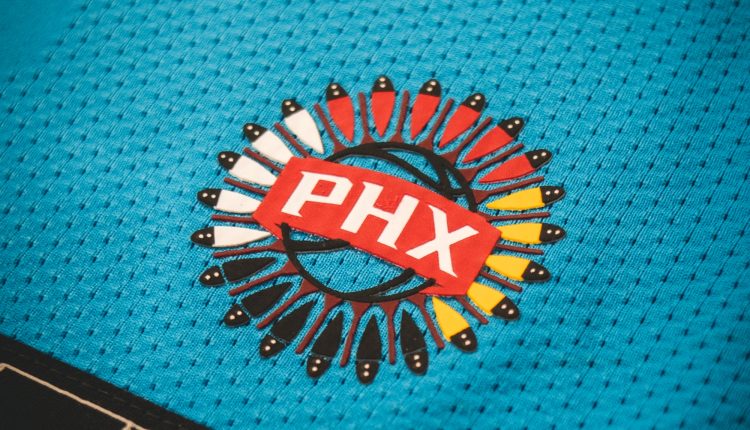 “This is historic to have a major sports franchise like the Phoenix Suns, to recognize the first peoples, the indigenous peoples of Arizona,” Gila River Indian Community Governor Stephen Roe Lewis said in a video revealing the Suns’ new jerseys.

When designing the uniform, with help from local partners, the team was inspired by thousands of years of shared characteristics, symbols and traits

“This is the first time we’ve had a uniform dedicated to the state’s Native American roots, so we’ve spent the past few years immersing ourselves in the history and cultures of Arizona’s Tribal Nations to properly honor each tribe’s heritage and traditions,” Phoenix Suns Senior Marketing Director Graham Wincott said.

The team began developing the uniforms in 2020.

“It was important to us that we have a City Edition uniform that honors the original residents of Arizona who built the state that we call home,” Wincott said. “The Suns and the tribal nations share a respect for family, community, the environment and basketball.”

The turquoise color represents the living or protection stone, stemming from the shared belief that the earth is living and all things are precious, according to a press release.

The Suns’ new logo on the jersey is inspired by the Native American medicine wheel, depicted on the waistband of the shorts, representing the four cycles of life and the four cardinal directions.

The 22 feathers in the medicine wheel logo and 22 arrowheads that line the bottom of the shorts represent each of the state’s tribes. The black tape running down the jersey and shorts feature the word for “sun” in each tribe’s traditional Native language.

“[It’s] just amazing that that’s on the jersey, and the players are going to go battle wearing that,” Phoenix Suns Senior Director of Live Presentation Shawn Martinez said of the Native words on the jerseys. “Every tribe has their word there.”

Arizona is home to one of the largest populations of Indigenous peoples in the U.S., and tribal lands make up more than 25% of the state’s land mass.

“The presence of the traditional languages of all 22 tribal nations of Arizona on the uniforms is  significant in showing the resilience and perseverance of our cultures,” Martinez said. “Many of these languages were never written and have been passed down from generation to generation for centuries.”

Martinez said he worked alongside Wincott to reach out to all 22 tribes to ensure they were involved in bringing the uniform to life.

It was a collaborative effort among the creative team at the Phoenix Suns, the Nike N7 program, tribal leaders, Native organizations and local Indigenous artists.

“We just wanted to make sure we were talking to all the right people,” Martinez said.

The team worked directly with the Inter-Tribal Council of Arizona and the Navajo Nation to ensure that tribal leaders were included in the process. They also collaborated with local groups, including the Heard Museum, Phoenix Indian Center and Cahokia SocialTech and ArtSpace.

The whole experience has been unbelievable, Martinez said, and he’s gotten emotional about it on multiple occasions because of the great response from Indigenous communities.

He hopes that it will positively impact all the Indigenous youth who play basketball within their communities and that they’ll see this jersey as a positive representation of Indigenous people.

“Together we look to inspire the next generation by honoring our past,” Martinez said.

Martinez is working on getting the jersey at the Smithsonian Museum as part of a display that discusses what sports teams can do to amplify Indigenous communities without using a mascot.

“From the beginning, it was essential for us to engage and involve our tribal communities and leadership in the design and development of the uniform,” Martinez said. “This enabled us to modify and enhance the uniform design with appropriate and culturally relevant details that otherwise would have been missed.”

“Hearing the voice of our tribes and having their support makes this even more special. It was definitely a  collective team effort,” Martinez added, saying he hopes this inspires other sports teams to do the same.

The Phoenix Suns also have a new basketball court to match their uniforms. The court was unveiled during their home game against the Golden State Warriors Nov. 16.

Lewis said the designs shown on the new jersey and the new basketball court inside the Footprint Center in downtown Phoenix are important representations of Arizona’s tribal communities because they are educational for those unfamiliar with Indigenous communities.

“All of these symbols, all the colors, they tell a story. They tell a story of the history and traditions, and cultures of the 22 tribes,” Lewis said.

He added that he finds the uniforms a beautiful, tasteful representation of all 22 tribes. The uniforms show the sacredness of Native culture and who they are as Indigenous people, Lewis said.

“The court is definitely blessed,” he said.

The Suns will wear the uniform throughout the 2022-2023 season. Martinez said when they showed the jersey to the team, their initial reaction was excitement, and he was glad to see it. Each player was given a uniform and a Native beaded medallion to match.

“I think this is probably the most historically significant jersey concept that we could wear in this region,” Phoenix Suns forward Cameron Johnson said.

Buying A House In Tucson