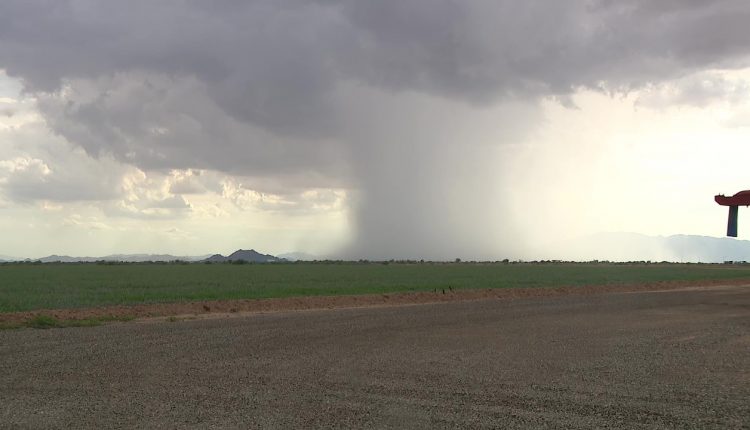 New round of monsoon brought scattered storms to Phoenix area

For the second time in as many days, the Valley saw another round of monsoon weather on July 26, but it did bring some much needed heat relief for some. FOX 10’s Stephanie Bennett reports.

PHOENIX – A new round of monsoon weather made its way through the Phoenix area on July 26.

Adverse weather conditions began to be felt in areas south of the Valley during the afternoon hours. Our photojournalist managed to capture video of a storm cloud that dumped rain in an area south of Riggs Road and the I-10.

Later on, SkyFOX also captured rain falling in other parts of the Valley, with pockets of rain and thunderstorms popping up in the areas of Litchfield Park, Maryvale and Youngtown.

At one point on the night of July 25, about 1,100 SRP customers were without power. Power has since been restored.

A FloodWatch has been issued for all 15 Arizona counties, as storms are expected to bring heavy rain, wind and lightning. The Flood Watch for Maricopa County, along with watches issued for Apache, Coconino, Gila, La Paz, Mohave, Navajo, Pinal, Yavapai and Yuma Counties will remain in effect until 5:00 am on July 27.

Some areas seeing more rain than others

According to officials with the National Weather Service, the state is at or just above normal precipitation for the year so far, and that does help alleviate the drought a bit.

However, not all areas are seeing the same amount of rain. In June, areas west and south of Phoenix saw above normal rain totals, but areas north and east of Phoenix were below normal.

The storm did bring down temperatures in parts of the Valley, and for some pet owners, it was a time to take their pets out to the park.

“It’s very nice. A lot cooler to take the dog out. He’s been dying to go to the dog park, clearly,” said Ashley Kelly-LaSalle.

“It’s very hot. I feel like my skin is cooking every time I walk out in the sun, but now, anything over a hundred is like, ‘wow! this is nothing!'” said Evan Soloman.

Soloman is experiencing the monsoon for the first time: he moved to Phoenix from South Carolina.

“It’s not any worse than any hurricanes we get down south,” said Soloman.

Recent storms, and by extension, the monsoon season, affected more than just people in the Phoenix area.

In Flagstaff, the city’s mayor has signed a declaration of emergency, as the city is affected by flash flooding caused by rain falling on burn scars from recent wildfires, which made the soil basically water repellant. The emergency declaration will help members of the community access much-needed resources.

Parts of the northern Arizona city and surrounding areas have been hit with multiple rounds of flooding in recent weeks and months. Cleanup efforts for those floodings remain ongoing, as boulders and mud from the mountain slide into homes and front yards just as quickly as crews clean them out.

“I just feel like it’s the last two days. I mean, they’ve cleared a lot of this, but it’s just coming back every time. That’s what’s a little demoralizing about it,” said Lisa Wells.

Meanwhile, rainy weather is causing more concerns over the potential for more flooding to take place.

“It’s been a lot of rain the last few days,” said Wells.

New storms add to worries over flash flooding in Flagstaff

As rounds of flash flooding caused by heavy rain falling on wildfire burn scars in the ravage area of ​​Flagstaff, the mayor of the northern Arizona city has signed a declaration of emergency, so that the community can have access to much-needed resources. FOX 10’s Marissa Sarbak reports.

Be prepared and stay safe during the monsoon

“Most Valley residents know how quickly and furiously storms can move in and out, bringing strong winds, dust, rain, and flash flooding. These storms can cause interruptions in services, such as water, power, and gas,” stated Captain Ashley Losch of the Glendale Fire Department.

GFD reminds residents of ways they can be prepared and stay safe: