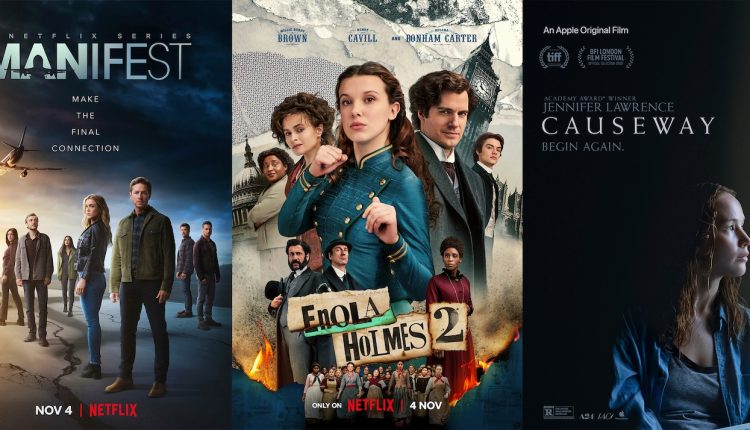 New this week: Radcliffe gets weird, ‘Causeway’ and Phoenix

Here’s a collection curated by The Associated Press’ entertainment journalists of what’s arriving on TV, streaming services and music and video game platforms this week.

— Elvis, Elton John and Freddie Mercury have all gotten the biopic treatment. Now, it’s finally Weird Al’s turn. In “Weird: The Al Yankovic Story,” Daniel Radcliffe plays the parody pro through his life—or, at least, a version of his life. Yankovic, himself, co-wrote and co-produced “Weird,” directed by Eric Appel. And, as you might expect, the “White and Nerdy” singer-songwriter fills the tale with plenty of satirical touches nodding to the usual conventions of the music biopic. Yet it’s also full of surprises. In my interview with Yankovic and Radcliffe, Yankovic said “Weird” “is funny because it shouldn’t exist.” “Weird,” Roku’s first original film, streams Friday, Nov. 4, via the streaming device.

— Enola Holmes (Millie Bobby Brown) is on the case, again. The Netflix sequel “Enola Holmes 2,” debuting Friday, Nov. 4, quickly follows up the charming 2020 film that adapted Nancy Springer’s book series and Arthur Conan Doyle spinoff. The sequel teams the younger Holmes with her famous older brother detective (Henry Cavill) for a multithreaded mystery that picks up some of the original’s strands (Helena Bonham Carter returns as Enola’s mother) while extending into the working conditions of 19th century London factories.

— In her first leading role in four years, Jennifer Lawrence stars in, and produces, “Causeway,” Lila Neugebauer’s drama about a US soldier named Lynsey (Lawrence) rehabbing at home in New Orleans after a brain injury suffered while on tour in Afghanistan . A gentle indie about trauma and recovery, “Causeway” is lifted by the warmth of Brian Tyree Henry, who plays a local mechanic with his own painful past who befriends Lynsey. Debuts Friday, Nov 4, on Apple TV+.

— A Boogie Wit Da Hoodie returns with his fourth studio album and it shows a lot of range. Singles from “Me vs. Myself,” out Friday, Nov. 4, include the languid “Take Shots,” featuring Tory Lanez, a team up with HER for the pop-leaning banger “Playa” and working with Roddy Ricch on “BRO (Better Ride Out),” with the lyrics: “I came from the bottom, I came straight out of poverty/I had to look around to see who’s with me and not with me.” Boogie can also be heard as the featured guest on Pink Sweat$’s sexy “Lay Up N’ Chill,” where the lyrics go: “Sippin’ on that rosé really get you in your feels.”

— Not many synth-pop bands get to record in the Louvre museum in Paris, but Phoenix are one of the lucky ones. Their 10-track “Alpha Zulu,” set for release on Friday, Nov. 4, was captured in a wing at the world-famous museum. The band’s first album since 2017’s “Ti Amo” has produced the single “Tonight,” a catchy duet with Vampire Weekend’s Ezra Koenig that unites the band’s lovely melodies with their trademark odd lyrics: “Could I be the best to jump ahead/Your feet are hurting less with moccasins.” Other singles include “All Eyes on Me” and “My Elixir” and “Winter Solstice.”

— Ireland has given us so many great artists — Sinéad O’Connor, U2, Niall Horan, Hozier and Glen Hansard. Dermot Kennedy may be the nation’s next big thing, judging by his second album, “Sonder.” Kennedy, with his expressive voice and impassioned songs, has amassed nearly 4 billion streams across platforms and has the best-selling debut album in Ireland of this millennium, “Without Fear.” The new album from the singer-songwriter is preceded by the singles “Dreamer,” a piano-driven ballad, and the wistful, dace track “Something to Someone.”

— George Lopez’s new sitcom is a family affair. In NBC’s “Lopez vs. Lopez,” the actor-comedian stars opposite real-life offspring, Mayan Lopez. Their fictional versions of dad and daughter are unlikely roommates with a rocky relationship. The 2002-07 comedy “George Lopez” remains one of the few Latino-led hits on TV, which continues to struggle with depicting America’s second-largest ethnic or racial group behind non-Latino whites. “Lopez vs. Lopez,” with Selenis Leyva and Al Madrigal in the cast, debuts 8 pm Eastern Friday, Nov. 4.

— Abrupt cancellations and unresolved stories used to be a common affront to viewers. Now other platforms can come to the aid of an axed series, as is the case with “Manifest.” After NBC ended its run at three seasons, it redeemed itself in repeats on Netflix and earned the chance for a proper finish. A total of 20 new episodes will be released in two parts on the streaming service, with the first half out Friday, Nov. 4. To recap the premise: An airliner lands safely in New York after a rough flight, but the passengers’ relief vanishes when they realize five years have elapsed in a few hours. Stars Melissa Roxburgh, Josh Dallas and JR Ramirez are back for the big reveal we want, eventually.

— With patience, even an 18th-century novel can get a TV prequel. It helps that the book at hand is “Dangerous Liaisons,” an amorality tale repeatedly adapted for stage and screen, including the Oscar-winning 1988 film. In the new Starz version billed as a “bold prelude,” Camille and Valmont are young, in love and in Paris as revolution looms. Alice Englert and Nicholas Denton play the pair destined to become architects of scandal and tragedy as, respectively, the Marquise de Merteuil and Vicomte de Valmont. Lesley Manville co-stars as the reigning marquise in the series debuting 9 pm Eastern Sunday, Nov. 6.

— Most people associate video games with fast-paced, over-the-top action, but there’s a huge audience out there for mellow farming sims like “Stardew Valley” and “Harvest Moon.” Square Enix’s “Harvestella” aims for the middle ground. Sure, you can while away hours tending to your crops and chatting with your neighbors. But there’s an ever-growing threat looming over your bucolic town, and sooner or later you’ll have to put down the hoe and pick up a sword. The demo promises the sort of apocalyptic showdowns Square is known for — after which, your homegrown zucchini is bound to be so much more satisfying. “Harvestella” comes out Friday, Nov. 4, for PC and Nintendo Switch.

Christine and Kody Brown Clash Over Assets: Who Gets What in Their Quasi Divorce?!?