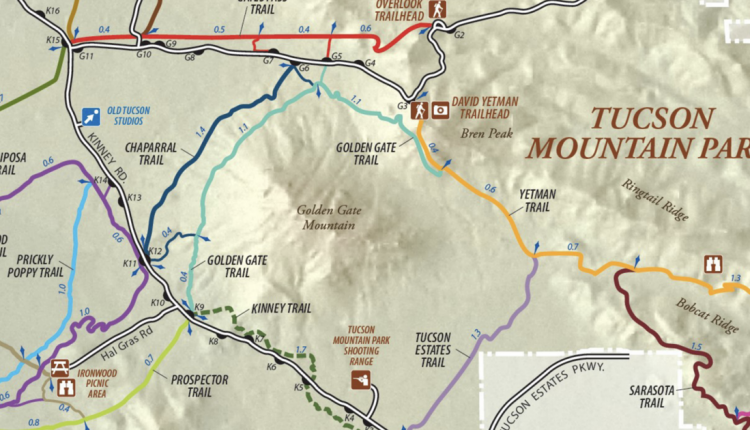 Residents still have time to give their input concerning the adoption of a South Kinney Road wildcat trail into the county’s Tucson Mountain Park trail system.

Adopting the single-track trail means it would not be paved but would include seasonal inspection. If needed, vegetation would be trimmed back, and if there’s water erosion, drainage would be installed. Directional signage that identifies the trail and helps users find their way would also be installed.

“We’ve put out the plan and proposal for the trail, and we’re asking for public input, so basically the more (comments) the merrier,” said Neil Stitzer, trails program coordinator for Pima County Natural Resources, Parks and Recreation .

“It’s totally open to the public.”

The unofficial trail runs parallel to South Kinney Road and extends from the Tucson Estates Trail to the Golden Gate and Prospector trails, so from pullout K1, which is a bit south of the Mountain Park Shooting Range, to K9, near Hal Gras Road. It crosses South Kinney at pullout K5. The proposed trail would measure 1.7 miles and is safer than walking on the road, according to Stitzer.

Plans to adopt the trail have been in the works since as early as 2017, when the need for a trail in that location was identified. Park users made an unofficial trail, something that evidently happens a lot here.

“It seems especially prevalent in Mountain Park, park users, if they want to get somewhere or if they want an experience that the existing trail system doesn’t provide, then they’ll make their own trail,” Stitzer said.

This is a problem for a couple of reasons, the main one being safety, but the other is environmental impact.

“Overall, it negatively impacts the park,” Stitzer added. “I understand why people do it, but those trails are not authorized by Pima County. It degrades the park, the natural and cultural resources, and it’s definitely something we don’t condone.”

The county rarely adopts wildcat trails, but this particular one has all the right elements.

“If it fits into our existing long-term plans, and it’s sustainable enough, and we’re able to adopt it and maintain it, and if it meets our standards to a certain degree, we can maintain it long term,” Stitzer said .

To add your comments and see a map of the proposed trail, visit https://bit.ly/KinneyTrail.

Team Liquid ScreaM on Phoenix’s buffs: ‘People don’t recognize it as they should’