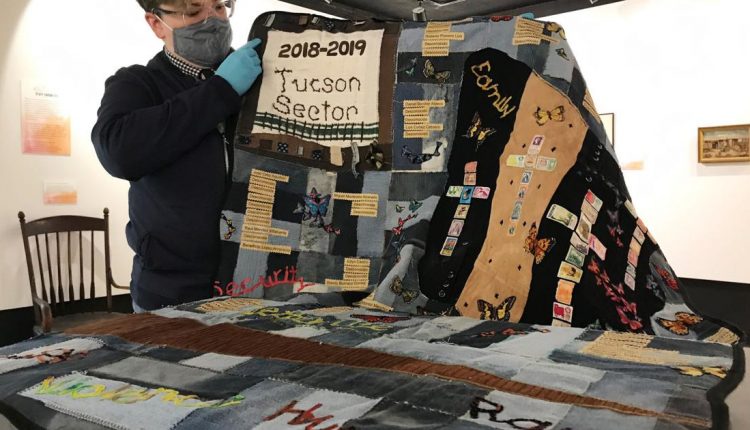 Approximately 1,400 remains have not been identified.

Since 2007, a group of artists have been sewing together abandoned clothing items found along migrant trails in Arizona, creating intricate quilts to commemorate those who died. The Migrant Quilt Project is preserved as part of the collection of the Arizona History Museum in Tucson. The names of the dead are included on the quilts whenever possible, but a large percentage of the bodies recovered from the desert go unidentified. They are listed as “desconocido” or unknown.


The “subversive quilt collection,” as she calls it, tells her stories of loss and sorrow with scraps of fabric and personal items sourced from the same desert where so many died.

The 2002-03 quilt features a map of Arizona made up of brightly colored denim squares and covered with 205 tiny Xs marking locations where bodies were found.

The 2018-2019 quilt contains stamps from the migrants’ home countries, arranged in the shape of crosses.

The 2015-16 quilt includes pesos that the quilter found hidden in the hems of several jeans abandoned in the desert.

The new exhibition marks the Tucson debut of the latest work in the series, the 2019-20 quilt by renowned textile artist Susan Hoffman.

The exhibition also includes statements from the various quilters about their experiences with the project.

Ipsen and company donated their creations to the Arizona Historical Society last year for storage, display, and loan to other museums, churches, and public buildings across the country for years to come.