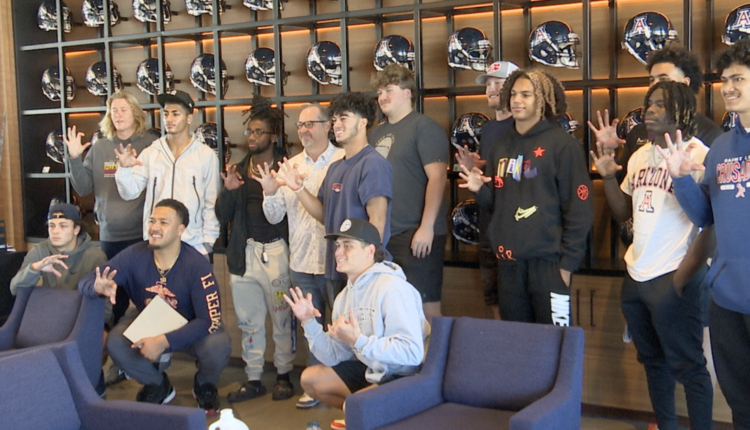 TUCSON, Ariz. (KGUN) — For more than a year now, college athletes have been able to make money off of their name, image and likeness, also known as ‘NIL.’ But every school has a different ‘NIL’ playbook.

At the University of Arizona, some players are getting paid, and that’s paying off for the community, too.

“One of the first things they ask nowadays when they’re being recruited is, ‘What does your NIL program look like?’” said Arizona alum Joey Medina.

“We’re all, we’re putting our bodies on the line, sacrificial time away from family and putting all this hard work in,” said Georgia transfer and new Arizona defensive lineman Bill Norton. “I think that, at some sort of degree, it has to be paid off.”

“Athletes are the main focus and the engine that drives what is the NCAA,” said Wells, Friends of Wilbur & Wilma’s executive director.

Medina, who serves as the group’s general manager and director of player relations, clarifies that the group is “completely third party” and not part of Arizona’s football program.

“Obviously, we don’t partake in the recruiting piece, but it’s nice for these kids to know when they do get on campus, there’s an organization like ourselves to help put them to work when they get here,” he said.

That ‘work’ is essentially using athletes’ platforms for advertising.

Friends of Wilbur & Wilma is both a for-profit and non-profit. Its money comes from Wildcat fans who buy memberships, companies or organizations who hire an athlete through the group’s website, as well as from donations that are tax-deductible and go toward helping local non-profits.

Earlier this month, several members of Arizona’s 2023 recruiting class were paid to promote one of those local non-profits, Friends of Pima Animal Care Center.

Just one social media post can go a long way.

“It’s incredible,” said Torre Chisholm, Friends of PACC’s executive director. “Sports is an amazing platform. People follow it. For us to be able to connect that to how we can help more pets and animals in the community, it’s a real boon for us.”

“I don’t wanna just be receiving money for nothing,” said Norton. “I want to see it go into the community through some kind of efforts that we’re doing.”

It’s a cycle where athletes can get paid while helping causes in the Old Pueblo.

“Now you’re gonna be able to inspire some kid that might wanna become a Wildcat. Or they’re gonna do something different. And then you have a community that now wants to back the program,” said Wells. “So I think it’s just gonna work in a cycle where everyone’s helping everyone.”

“Tucson people want to support each other,” Medina added. “We might not necessarily have as much money as some of the other universities that you hear about in the NIL world. But what I can tell you is that the quality of engagements that we’ve done is what’s given us that notoriety to be one of the top 20 NIL collectives in the United States.”

But NIL is still new. The system is still incomplete and far from perfect.

“So there’s gotta be a balance to make sure that everyone is getting a piece [of the money]but it’s not taking from one [program] to the detriment of the other,” said Wells.

Medina says Friends of Wilbur & Wilma plans to expand to representing other sports at UArizona, starting with Arizona women’s basketball this winter.

—-
STAY IN TOUCH WITH US ANYTIME, ANYWHERE