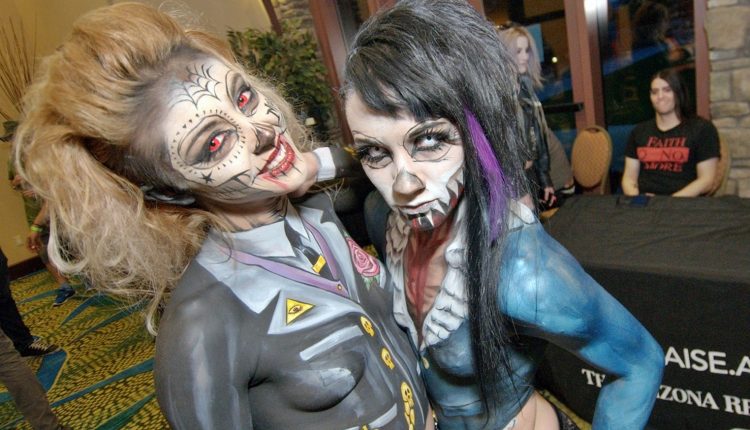 Hot geek summer is in full swing and there are plenty of nerdy events to do around the valley during the month of July.

You can dress up as Max from Stranger Things and dance to Kate Bush’s “Running Up That Hill.” Or watch a local artist create a comic book in the span of a day. Or even hang out with people cosplaying slasher film villains like Freddy Krueger and Jason Voorhees at the annual horror fandom convention Mad Monster Party Arizona. Locals can also interact with other cold-blooded creatures at ReptiCon Phoenix or All Puppet Players’ staging of a Jurassic Park parody.

Read on for all the details about each of these events, as well as other nerdy happenings around metro Phoenix this month.

Now Through Saturday, July 16
Playhouse on the Park at Central Arts Plaza, 1850 North Central AvenueIf you were one of the folks who saw Jurassic World: Fallen Kingdom and walked away in disgust, consider attending the All Puppet Players’ satirization of the blockbuster franchise. The local troupe spent an estimated “tens of dollars” to create this ribald send-up of the original Jurassic Park where “puppet-paleontologists fighting terrifyingly hilarious dinosaurs.” Performances are held every Thursday through Sunday at 7:30 pm through July 16. General admission is $40 and VIP tickets are $57 and feature priority seating within the front two rows and deals on drinks. Cocktail table seating for two is also available and includes a complimentary bottle of wine and happy-hour prices. Attendance is limited to those 17 and older.

Friday, July 8th
The Van Buren, 401 West Van Buren StreetWith the second half of Stranger Things’ fourth season debuting on Netflix in July, the folks at The Van Buren are cashing in on occasion with a dance night inspired by the show. The 18-and-over event will have DJs spinning ’80s tunes and songs by musicians and artists who have been a part of the show’s soundtrack. We’re certain that includes Kate Bush’s “Running Up That Hill,” given how everyone’s gone gaga for the 1986 track since it was prominently featured in an episode earlier this summer. There will also be an outfit contest, a photo booth, and giveaways. Doors open at 8:30pm and tickets are $13 to $18.
click to enlarge

Freaks and geeks alike will flock to Mad Monster Party Arizona 2021 this weekend.

Friday, July 8 to Sunday, July 10
Renaissance Phoenix Glendale Hotel, 9495 West Coyotes Boulevard, GlendaleStrange, sinister, and scary creatures will be lurking out in the west valley during the second weekend of July. (And no, we’re not referring to methheads.) It’s Mad Monster Arizona, the weekend-long convention that’s aimed at fans of horror films and things that go bump in the dark, not to mention anyone who enjoys some frightening fun. As it is the norm for the three-day event, it will include multitudes of programming, activities, and and appearances by celebrities associated with horror. Special guests at this year’s event include Scream’s Neve Campbell, Machete’s Danny Trejo, Sherilyn Fenn from Twin Peaks, and The Crow’s Rochelle Davis. Hours vary. Daily admission is $35 to $45 and a full “shriekend” pass is $80.
click to enlarge

Saturday, July 9th
AWF Arena, 3104 West Thomas RoadWeeks after AEW and New Japan went head to head, two of the Valley’s most notable indie wrestling promotions will square off in a showdown of their own. Competitors from Party Hard Wrestling (which has been on hiatus since early 2020) and the Arizona Wrestling Federation will face off in a massive smackdown where honor and bragging rights are at stake. Subtitled “Unfinished Business,” the event will feature such matches as a triple-threat battle between Da Shade, Charles Cassus, and Alvaric Reiner for the AWF Heavyweight and PHW Charizona championships. Bell time is at 8 pm and tickets are $20.
click to enlarge

Saturday, July 9 to Sunday, July 10
Drawn to Comics, 5801 West Glendale Avenue, Glendale Depending on the particular artist, your average comic book can take anywhere from a few weeks to as long as a year to create. Local creative Russ Kazmierczak, however, won’t need that long. The artist behind Amazing Arizona Comics will write and draw an entire 24-page comic book in the span of a single day while sitting behind a storefront window at Glendale’s Drawn to Comics. “It’s my David Blaine meets Jack Kirby impression,” Kazmierczak says. It’s similar to the annual 24-Hour Comic Challenge, which was launched by famed cartoonist Scott McCloud in 1990 and takes place worldwide every fall. Kazmierczak says there’s no preparation involved and he’ll be starting from scratch. “I’m supposed to go in cold, with no conceptions of what my story might be, and just put pencil to paper [and] start storytelling,” he says. The challenge will start at 1 pm on Saturday and last until the following afternoon. The public can watch Kaz in action or sponsor an hour of the process, which benefits local charity Kids Need to Read. More info is available here.
click to enlarge

Saturday, July 16
Sun Studios of Arizona, 1425 West 14th Street, TempeLocal anime fans looking for a fix to tide them over until Saboten Con in September might consider attending this one-day pop-up event in mid-July. More than 50 vendors will be on hand for the convention, which will offer such activities as a scavenger hunt, raffles, a cosplay contest and art fashion show, K-pop dance performances, a “swap weeb” (or weeb swap meet), and more. Hours are from noon to 9 pm General admission is $15 and VIP tickets are $30.
click to enlarge

Have a full-scale encounter with reptiles at ReptiCon.

Saturday, July 16 to Sunday, July 17
Mesa Convention Center, 263 North Center Street, MesaFor those who don’t suffer from herpetophobia (or the fear of reptiles), the latest edition of ReptiCon Phoenix happens in mid-July in downtown Mesa. The two-day event will feature vendors, breeders, and experts, as well as the chance to handle a scaly creature or two. According to the con’s website, reptiles like geckos, snakes, and maybe even an alligator will make an appearance. (Attendees are also allowed to bring two of their own reptiles, but only if they’re non-poisonous.) Hours are from 9 am to 4 pm on Saturday, July 16, and 10 am to 4 pm on Sunday, July 17. Ticket prices vary per day. Check out the ReptiCon website for full details.

Saturday, July 23
Orpheum Theatre, 230 West Adam StreetRidley Scott’s 1982 bravura cinematic adaptation of Philip K. Dick’s novel Do Androids Dream of Electric Sheep turned 40 last month and has aged pretty well (dated references to Atari aside). The futuristic neo-noir flick, set in the rain-drenched and neon-filled dystopia of LA, is still as thought-provoking and visionary as ever. Blade Runner will be screened at the Orpheum Theater at 6:30 pm on July 23 as a part of the venue’s summer film series. Tickets are $16 for adults and $11 for kids 12 and under.
click to enlarge

Saturday, July 23
HeatSync Labs, 108 West Main Street, MesaYou’re welcome to BYOR – or build your own robot – at this DIY maker event at Mesa’s HeatSync Labs. Participants will be given materials to create their own customized automaton, including LED eyes, and shown how to use a laptop to design it. The staff will then use a laser cutter and other tools to build the robot. The workshop is open to all ages (though adult supervision is required for kids) and runs from 1 to 5 pm It costs $25 to participate or $45 if you’d like to build a mirrored acrylic robot. More info can be found here.