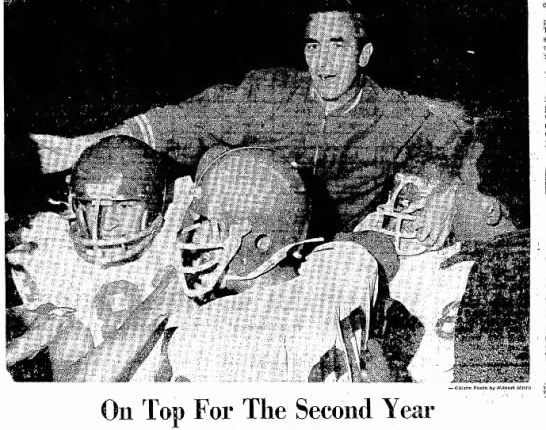 GAME SUMMARY: Tucson High rallied behind quarterback Frank Castro and receivers Jinx Johnson other Lonnie Williams in the fourth quarter to lead Ollie Mayfield to his second consecutive state title with the Badgers.

Williams, a 6-foot and 180-pound end, caught the game-winning touchdown — a 39-yard strike by Castro with 1:32 remaining.

A flurry of scoring occurred after Tucson (11-1) trailed 7-6 with 4:00 remaining. The Badgers, a ball-controlled wishbone offense, were on their own 20 facing the difficult task of moving the ball against Tempe’s stingy defense.

That’s when Williams lined up as a flanker and Johnson as a wideout on the same side. Johnson ran a flag pattern, took a perfect pass from Castro and ran 80 yards down the sideline for the touchdown to put Tucson ahead 12-7.

Tempe’s prep All-American quarterback Fred Mortensenwho went on to play at ASU and the USFL, answered quickly with a 50-yard touchdown pass to give the Buffaloes (11-2) a 14-12 lead with 2:34 remaining.

Castro, dubbing “Mr. Everything” by the Tucson Citizen, took over from there. Castro, who also intercepted Mortensen twice in the game, hit Williams with the winning pass on the next possession.

The victory was clinched when Castro made his second interception of the game with 7 seconds remaining and time ran out during his return to the Tempe 37.

Castro completed 9 of 14 passes for 183 yards with two touchdowns and an interception. Johnson tallied 93 yards receiving on two catches while Williams had 93 yards on four receptions.

Mortensen completed less than 50 percent of his passes (15 of 33) for 229 yards with two touchdowns and the three interceptions.

DID YOU KNOW: Frank Castro went 13-0 with a 0.68 ERA as a senior pitcher with the Badgers that school year. He also hit .426 as the team’s cleanup hitter leading two teams to a state championship. Tucson High’s baseball team finished a remarkable 25-0 that season, a team coached by Ray Adkins that included future Arizona and MLB standout catchers Ron Hassey. Castro went on to play baseball for Pima and NAU before a professional career in Mexico. Castro became a miner and educator, teaching algebra at San Carlos, Mexico. He passed away unexpectedly at age 59 in 2013.

THEY SAID IT: “All I thought about was that if I caught the ball, we’d win state. And it means a lot more this year to me than it did last year. We’re seniors now and that makes a difference. It’s like Coach Mayfield says: we’re all just spokes in a big wheel and the juniors helped us out a lot.” — Tucson receiver Lonnie Williams to the Tucson Citizen. Williams caught the go-ahead 39-yard touchdown pass from Frank Castro with 1:32 remaining.

BOXSCORE (printed in the Tucson Citizen):