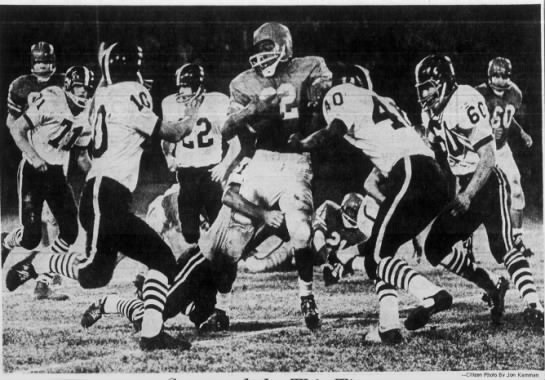 CHAMPIONSHIP: Class 5A (known as Class AA at the time)

GAME SUMMARY: Tucson’s pass defense, considered the Badgers’ lone weakness in a 12-0 season, rose to the occasion with four interceptions against Yuma (9-3) in one of the best seasons recorded by a Southern Arizona high school team.

Tucson won its initial state championship in four tries since the playoff system started in 1959. Coach John Mallamo and the Badgers came up short in three previous title appearances in 1959, 1960 and 1962.

The Badgers allowed more than 1,300 yards passing that season and every touchdown allowed in the last month of the season was via the pass.

That did not mean a thing after Frank Mendez intercepted two passes and David Carlson other David Jones each had one against Yuma at Arizona Stadium (then known as Varsity Stadium).

Legendary late quarterback Rich Aldaywho went on to a prestigious career as baseball coach at Pima College and New Mexico, hit Ron Sainz with a 36-yard touchdown pass to open the scoring.

Yuma threatened down 14-7 by moving the ball to midfield when quarterback Dick Timmons completed four out of five passes to open the drive. The criminals then tried a halfback pass and Jones foiled the attempt with an interception that turned the tide of momentum.

Tucson subsequently drove 55 yards for a touchdown, scored by LewisCook on a 6-yard run to increase the lead to 21-7.

Cook’s 9-yard touchdown run to cap the scoring was set up by Alday connecting with end Al Almazonwho lateraled to Jones on a fourth-and-seven situation at the Yuma 38. Jones carried the ball to the 18-yard line for the first down.

Cook finished with a season-high 18 carries for 139 yards. Jones rushed for 94 yards on 11 carries.

Yuma was held to only 89 yards passing.

Tucson broke city records that season by scoring the most points (404) while allowing the fewest (94).

The Badgers’ closest margin of victory was 29-14 against El Paso Irvin High School in the second game of the season. The other 11 victories were by 20 or more points.

THEY SAID IT: “This is the one we wanted. This club knew all season what they had to do and they did it.” — Tucson coaches John Mallamo to the Arizona Daily Star.

DID YOU KNOW: The victory was Tucson’s 10th state title overall but the first since a statewide playoff system was introduced in 1959. … Tucson’s 404 points were the most in city and school history until another undefeated Tucson High squad broke the mark in 1970 with 475 points. Mallamo’s 1965 team remains second in school history in total points as it averaged nearly five touchdowns (33.7 points) each game under the direction of the highly-popular Alday.

In California, Abortion Could Become a Constitutional Right. So Could Birth Control.