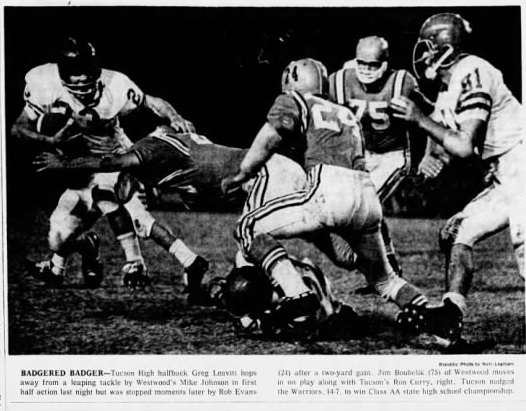 No. 6: Tucson wins consecutive state titles, beating Westwood in 1966 with a last-minute pass

CHAMPIONSHIP: Class 5A (known as Class AA at the time)

GAME SUMMARY: Tucson finished 11-1 and captured its second straight state championship after uncharacterstically going to the air to pull off the thrilling victory over Westwood.

Tucson coach John Mallamoa ground-oriented coach, relied on the pass — specifically a 34-yard touchdown strike from Art Monje to Keith Ritchey — to come out on top.

The Badgers’ last possession began at their 48-yard line with 1:30 remaining.

Monje was sacked for a 10-yard loss on the first play but Westwood was flagged for a holding penalty, moving the ball to the Westwood 37.

Anus Greg Leavit ran twice for only three yards, Monje again dropped back to pass. He avoided tacklers and threw downfield to Ritchey, who made a spectacular diving catch into the end zone with 41 seconds left.

After three off-side penalties on Westwood (10-2) during the extra-point attempt, Monje sneaked the ball over to make it 14-7 (two-point conversions did not exist at the time).

Westwood went to trickery after the touchdown with coach Edgar “Mutt” Ford calling the “Jackrabbit Play,” which he created while coaching Mesa High School. It is similar to the “Fumblerooskie” play in which an offensive lineman takes the ball from the line and tries to run downfield with the hope the defenders don’t see him with the ball.

The play was unsuccessful for Westwood guard jeff quinnwho juggled the ball as he broke for the open field and was brought down after an eight-yard gain.

Monje, who completed four of nine passes for 62 yards, had another touchdown pass, a 19-yard strike to Ernie Fimbres, on a fourth-down play with 4:04 left in the first half. half back René Madrid set up the score with a 61-yard run from the Tucson 16 to the Westwood 23.

Westwood failed to cash in on recovering a fumble at the Tucson 9 early in the third quarter, but the Warriors took advantage of getting the ball on their 41 after a turnover and made it a scoring opportunity later in the quarter. Bob Soza scored on a 1-yard run to tie the game at 7.

Madrid finished with 112 yards on 12 carries.

THEY SAID IT: “Wasn’t it a thriller? We had to pass…we were going for the win. Just think, we scored on passes. This win was better than last year’s (when the Badgers beat Yuma 27-7). Last year, it was a little easier. This is a different type of team than last year. Last year’s bunch had more talent. This is a special club…they hustled and never gave up.” — Tucson coach John Mallamo to the Tucson Citizen.

DID YOU KNOW: Mallamo compiled a 79-29-4 record at Tucson after taking over the program in 1956. He became principal of Sabino in 1972 when it opened until his retirement in 1980. He played football at Arizona but his career was interrupted by four years of service during World War II. He passed away in 1987 at 67 years old after suffering a heart attack.