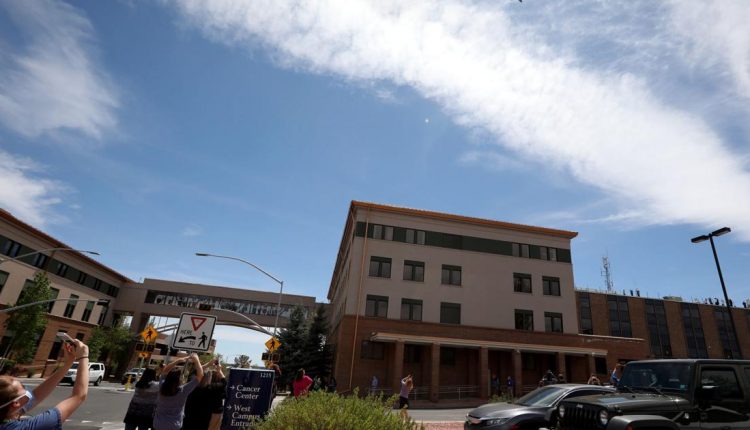 The mandatory meetings, one scheduled for Jan. 6 and the other scheduled for Tuesday, are the first phase of the city’s approval process. NAH then plans to distribute a summary of both meetings to local residents while continuing to work on campus planning. The next phase of project approval is a presentation to the Planning and Zoning Commission and Flagstaff City Council — which is not yet scheduled.

At the first meeting, some of the project leaders discussed details of their plans for the new campus and answered feedback and questions from the community.

The new site will include a health and wellness village in addition to the new hospital and ambulatory care center (ACC) that NAH intends to build for FMC.

“What we envision is a healthy lifestyle goal, not just for the city of Flagstaff, but for our region as a whole,” said Josh Tinkle, NAH’s chief operations officer. “This values ​​wellness, innovation, virtual care and continuity to maintain and sustain the local healthcare we have here in northern Arizona. We want the hospital and outpatient clinic to be an anchor for the site, but we don’t want it to be the focus.”

The main reason for the new campus is that FMC’s location does not provide enough space to adequately provide the required care and that the location does not offer an option for expansion. For example, two major roads run through today’s campus.

Most of FMC’s current campus was built in the 1980s, according to a timeline included with the presentation.

“The typical shelf life for hospitals here in Arizona is usually somewhere in that 30 to 50 year time frame,” said Steve Eiss, vice president of real estate and development. “Some of the major healthcare expansions in the Valley over the past decade were intended to replace all buildings originally constructed in the early ’70s and ’80s. … The really typical reason for this has to do with insufficient size for what we need these days to ensure we have things like proper ventilation, new medical technologies and up-to-date staff efficiency.”

He also said the hospital’s current patient bed space is smaller than the national norm. FMC currently has approximately 1,700 square feet per bed, compared to a current national average of 2,300 — which is expected to be 2,500 by the end of the planned development of the new campus.

“We are more than 25 percent smaller than current benchmarks and even smaller when we look at the future shape of healthcare – and again the main reasons for this are updated codes, the increase in size of operating rooms and patients along with the necessary space for infrastructure and adequate ventilation,” he said.

Other changes that will require additional space include updating the technology and adding an ACC and parking (although COVID restrictions are offering a temporary mitigation, Eiss said the campus is currently missing about 500 spaces, 1,000 if they are the original site would add an ACC).

The presentation also outlined a broad timeline for the project’s other development phases, although Eiss noted that this was “best guess” rather than something set in stone.

The hospital and ACC will initially be built on a 55-acre site that will include 22 hectares of ponderosa pine forest. This “wellness retreat” area will be a buffer between the hospital and the property to the west (which will likely become residential) and also provide a connection to the current forest and Fort Tuthill County Park.

The reason for this request has to do with ambulance transport. NAH plans to use the first two floors of the hospital building as diagnostic and treatment areas, with the inpatient rooms directly above and taking up most of the tallest part.

“Although this may sound counter-intuitive to some people, the most efficient way to design a hospital is not just for staff efficiency, but also for patient efficiency to reach places like the OR [operating room] or emergency imaging is to bring them straight down vertically,” Eiss said.

After completion of the hospital and ACC (by 2027 according to the presentation), the development will take place in three phases, which should be completed by 2040. Phase 2 (2025-2030) includes a hotel and grocery store, as well as restaurants and retail, which will also be included in Phase 3 (2027-2035), along with a conference center and clinical partnerships. The final phase (scheduled for 2030-2040) will include a research and development and incubator space.

The presentation also included some images showing potential uses for the current FMC campus, although plans were undecided.

These are based on analyzing “peer facilities” across the country, hospitals in smaller areas that have closed in the last decade and the things that have replaced them. They found a few themes that could be used as options, including using the space for housing, senior living, memory care, or a community room. As with the Health and Wellness Village, “Mixed Use Small Commercial Retail” was an option.

“NAH is committed to ensuring that the redevelopment is in the best interest of the community,” said Eiss. “…We tried to show what a few mixes of these would be. We are able to utilize the existing campus that we have and the existing water, power and sewage infrastructure which is unlike most real estate in the city of Flagstaff and while we currently do not have adequate parking for our healthcare facility, we do have quite a few Parking spaces it refers to other types of use.

Redevelopment plans are far from complete and work is not expected to begin until 2028.

NAH has submitted an Economic Development Plan to the City of Flagstaff. Once completed, the project is expected to have an annual positive impact on the city of US$389 million.

It also anticipates new clinical services and greater access to care for residents of northern Arizona through things like additional oncology and rehabilitation services and reduced emergency room wait times.

The project’s traffic impact analysis has been submitted to the city and is currently under review. Eiss said the new location will be more accessible for the majority of patients, 60% of whom are non-Flagstaff residents. He also said that despite concerns, it’s likely Beulah will need to be widened to four lanes with new traffic lights to accommodate the extra traffic.

According to Eiss, NAH continues to work with Mountain Line and other development partners to bring public transportation to the area around the new campus.

The next public participation meeting on this project will take place virtually on Tuesday. Visit nahealth.com/expansion for more project details, links to the meeting, and ways to provide feedback.

Yuma of Transportation is still looking for bus drivers

Photos show changes in the Phoenix landscape over the decades