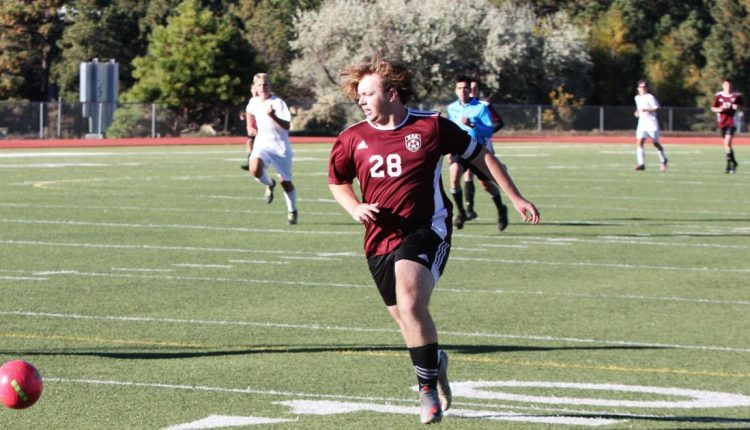 The Northland Prep Academy boys soccer team dominated throughout Tuesday, securing a 6-2 win over Page and clinching the 2A North Region with a perfect 7-0 record in region play in Flagstaff.

the no 4 Spartans (9-2-1, 7-0 North) honored their four seniors for their contributions at halftime against the No. 19 Sand Devils. And 40 minutes later, they officially celebrated clinching a playoff berth for the first time in coach Erik Carrillo’s tenure with the squad.

Sean Cifu, a senior who has played with the Spartans since his freshman year, called the seniors’ moment and major victory “special.”

“We’ve never gotten this far since I’ve been playing, so it’s cool to have this day and have the playoffs to look forward to,” he said. “We’ve never had this sense of achievement going into the end of the season. We’re proving that we’re better than we’ve been before.”

Cifu got the offensive play going for the Spartans Tuesday. In the first nine minutes, they got pressure on the Sand Devils but couldn’t convert with clear chances on goal. That changed in the 10th minute when Cifu took Northland Prep’s first shot on goal. The ball was parried away by Page’s goalkeeper, but the shot earned a corner kick.

Junior Keenan Graber scored the opening goal off of the ensuing play, and then struck again less than a minute later to give the Spartans a 2-0 lead in the 11th minute. Graber finished with a game-high three goals.

Freshman Ian Fergason scored the first of his two goals, dribbling around a few defenders and finishing easily, to give the Spartans a 3-0 lead in the 14th minute. With a major lead, the Spartans were able to not only increase their confidence in the offense, but also play the rest of their seniors — even those who don’t normally play a whole lot of minutes — for a majority of the match .

“It’s huge, especially on a senior night, but it’s always nice to get up early. That way we get everyone the chance to get in and experience a region game, and I want to get them the chance to develop,” Carrillo said.

The Spartans led 4-0 at halftime on a free kick from near midfield by junior Isaac Finney, and the Northland Prep seniors were honored alongside their families with speeches by teammates.

NPA boys soccer is celebrating its seniors today at halftime of today’s game.The Spartans lead Page 4-0 at the break pic.twitter.com/8Klr3Rs5Ba

Up big, Northland Prep conceded two goals, coming in the 45th and 62nd minute, respectively. Between them, Graber drew a penalty and blew the ball past the goalkeeper to secure his hat trick.

Though they could not keep up the shutout, the Spartans never truly were threatened with the chance of a comeback.

The victory capped a season few, if any, of the Spartans could have predicted at the beginning of the fall campaign. After going 2-4 in region play last year, and not a lot better in seasons before that, there was cautious optimism heading into this year with a new crop of talented players. But it was not until a few wins over teams that had easily disposed of Northland Prep in the past that the players truly started to believe in themselves.

Now the Spartans have a chance at the playoffs to show for it.

“It’s a great feeling to get to go to state and beat teams we’ve never beaten before,” Cifu said.

“From where we ended up last year, to go 7-0 in the region, it’s a huge step for us. And it’s only the beginning, because we only lose four seniors. So the base is still there and it’s big for the future of our team,” Carrillo added.

The Spartans have one more match left in the regular season, a non-region contest against No. 5 Blue Ridge on Thursday. The match will likely impact seeding in the playoffs come next week.

“Winning that would be big for us,” Carrillo said. “But am I too worried about it? No, I’m more thinking about getting healthy and ready for state.”

Lane restrictions and construction on US 95 in Yuma