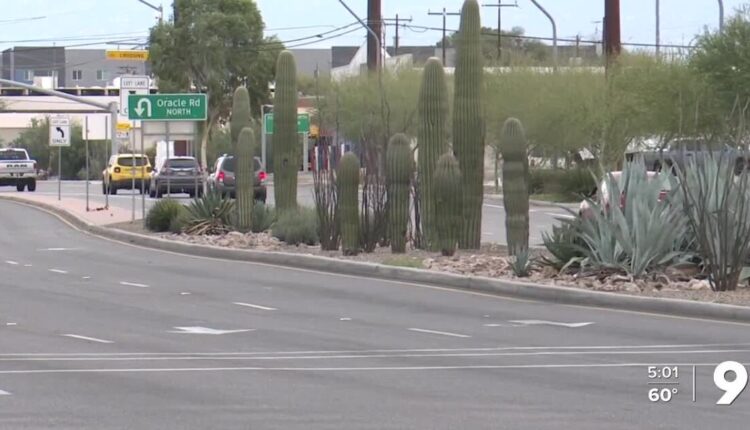 TUCSON, Ariz. (KGUN) — Seeing pedestrians crossing Grant and Oracle Roads when they’re not supposed to be an everyday occurrence for employees at Tucson Tattoo.

“There’s a lot of people that are hanging out on the side of the road, doing drugs and then they cross in the middle of the road,” their owner Derek Dooley said.

He said there are a lot of homeless people who are crossing when they’re not supposed to.

He said there have even been pedestrian deaths around his business.

“I think we had somebody die recently that was struck by a police car that was coming down here for some other incident,” Dooley said.

They say a lot of pedestrian deaths are happening on the Grant Corridor and the Oracle Corridor.

They say there were 5 pedestrian deaths in just one month from the end of November to the end of December.

TPD said they’re seeing a lot more deaths that are the pedestrian’s fault and said a lot of the crashes happen on roads with four to six lanes.

They said they’ve already seen one pedestrian death this year on Silver Street and Craycroft Road.

Dooley said he believes the City of Tucson needs to do more to curb the amount of people crossing the street when they aren’t supposed to.

“Having more of a police presence here to help people to be more safe. Moving encampments that are right on the side of the road which in my mind is dangerous to those people and the drivers on Grant Road,” he said.

Thomas Guarrera, a security guard working near Grant and Oracle, said he’s seen over two dozen pedestrians cross when they’re not supposed to.

He said not only does the City need to install more street lights, but he said there needs to be more crosswalks.

“Nobody is going to want to walk a certain distance, a block or two blocks to get to the next light,” he said.

However, others like Julie Layman said there aren’t enough crosswalks. She admitted to J-walking across Grant and Oracle.

“I never do that but at that time I did and I ended up getting a 250 dollar ticket,” she said.