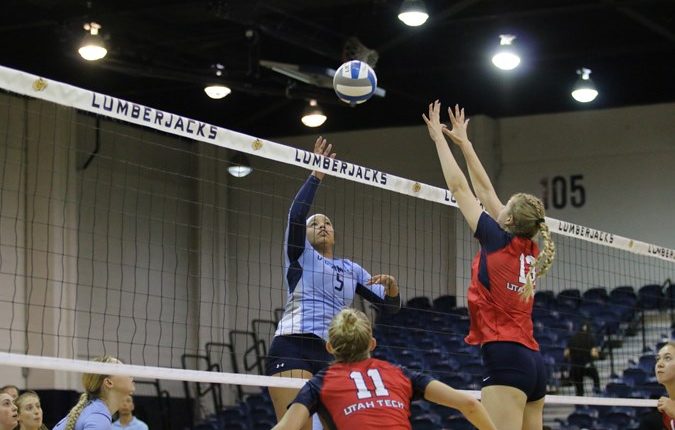 FLAGSTAFF, Ariz. – The Old Dominion volleyball team started off its 2022 season with a pair of 3-0 setbacks against Michigan and Utah Tech on Friday, Aug. 26 at the Northern Arizona Invitational. North Arizona is hosting the two-day tournament at the Rolle Activity Center in Flagstaff, Arizona.

“Tough day of competition for us,” said head coach Fred Chao. “We head a nice first set against Michigan, but it got away from us. We are not playing at our level yet and are working to get on track. Every aspect of our game seems to be off and the margins against these teams force us into strings of physical and mental errors. While there could be external reasons we can point to, we will spend our energy looking within and sorting through what we can control. It’s uncomfortable for us to struggle like this, but we will learn from it. “

Myah Conway led the Monarchs (0-2) offense in their first match of the day versus Michigan. The right side hitter from Orwigsburg, Pa. Finished with 11 kills on 26 attempts, swinging for a .231 hitting percentage. Kira Smith was close behind Conway with nine kills, while Teresa Atilano contributed 21 assists and two service aces. On defense, Hailey Duncan and Conway combined for five blocks and Anna Burkhardt recorded double-digit digs with 14.

The Wolverines (1-0) jumped out to a 5-2 advantage in the opening set, but Atilano assisted Conway and Burkhardt served an ace to help ODU pull even at 5-5. Michigan looked to pull away as four unanswered points gave the Wolverines a 15-10 lead, but the Monarchs refused to go away. Following a Michigan service error, Atilano set up Duncan for a kill before Conway and Duncan stuffed a Wolverine attack attempt. Atilano then dropped in an ace to narrow the gap at 15-14. Smith then helped ODU wrestle away control with a kill that made it 20-18, but a 5-1 swing down the stretch allowed the Wolverines retake the lead as they held on 25-23.

Michigan set the tone early in set two as they built a 5-1 lead and later pushed it to 14-7. A late 3-0 push helped the Monarchs get to within 22-17, but a 25-17 decision made it a 2-0 match lead for the Wolverines. In the final set, Michigan earned six straight points and never looked back as they went on to a 25-14 final to close out the match.

Conway and Bailey Burgess tallied eight and five kills, respectively, to lead ODU in its loss to Utah Tech. Atilano chipped in 12 assists with two aces, and Ashlynn Belcher followed with nine assists. On the other side of the net, Burgess made four blocks with Atilano right behind her with three. Burkhardt paced the back row with eight digs, Belcher and Atilano were next with six each, and Tessa Mati and Conway both totaled five digs.

The Trailblazers (2-0) came out quick in the opening set to the tune of a 13-3 lead. Three straight blocks highlighted a 5-0 ODU response, but the Monarchs couldn’t get any closer as Utah Tech grabbed the set by a score of 25-14. ODU kept the second set close as Burgess put away a ball from Belcher to trim the Utah Tech lead to 16-13. However, the Trailblazers then took off with a 5-0 push and went on to win the set, 25-16.

ODU stayed competitive throughout the third set. After digging themselves at 8-4 hole, the Monarchs fought back to tie the set at 9-9 thanks to back-to-back aces from Atilano. Utah Tech went back up 17-13, but ODU earned the next three points and reflected in striking distance the rest of the way. Unfortunately, the Trailblazers clinched the match with a 25-22 set victory.

“Tomorrow will be focused on being more effective offensively, working to increase our earned points and decreasing our errors,” added Chao.

Old Dominion concludes the tournament on Saturday with a 5 pm EST meeting with host Northern Arizona. Live stats will be available, and the match will be streamed on ESPN+.