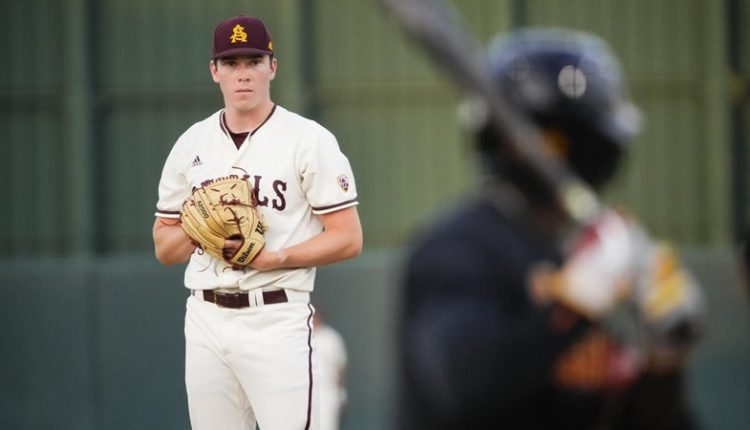 TUCSON — Sun Devil Baseball heads down south to take on rival Arizona this weekend in Tucson, with the stakes even higher with one month left in the regular season and much to be determined in the Pac-12 rankings based on how this series goes for both teams. The series is scheduled to begin Friday, April 22 at 6 p.m. AZT, followed by a 5 p.m. first pitch on Saturday and concluding Sunday at 12 p.m. The Pac-12 Network will carry the entire weekend series on at least one of its affiliates.

1. The Sun Devil defense has turned 35 double plays so far this season, a total good for 7th in the nation.

2.  Ryan Campos is now batting .385 in Pac-12 games this season, nearly 30 points more than any of his teammates and 4th in the league

3. The Sun Devils are 7th in the nation with 92 doubles this season and have multiple doubles in six straight and 24 of 37 games.

5. Joe Lampe already has 28 extra-base hits this season, which surpasses his grand total of 20 last year and second in the Pac-12.

10. ASU has gotten 11 quality starts out of its pitchers this season, notable as it had only 9 in the entirety of last season.

38 – In Arizona State’s last six games, true freshmen have bat 45-for-124 (.363) with 38 of the teams 89 RBIs. Ryan Campos is the team’s best hitter in Pac-12 games, coming in at .385 in league games, nearly 30 points higher than any of his teammates and tied for fourth in the league. Campos has the second best average on the team with runners in scoring position at 13-for-35 (.371) and a perfect 6-for-6 bringing a runner home from third with less than two outs. Jacob Tobias is the team leader in RBIs in Pac-12 games with 13 this season.

2 – Deuces have wild for the Sun Devils this season with ASU excelling in two categories on the year: doubles by the offense and double plays turned by the defense. ASU has turned 35 double plays on the year – good for 7th among all Division 1 programs. Additionally, ASU has 92 doubles on offense so far this year – also good for 7th in Division 1 baseball. ASU has doubled as least once in all but five games this season and has multiple doubles in 24 of 38 games.

Welcome to the Jam

A Little Luck-ham On Our Side

Hold on to Your Seats

The Kids Will Be Alright