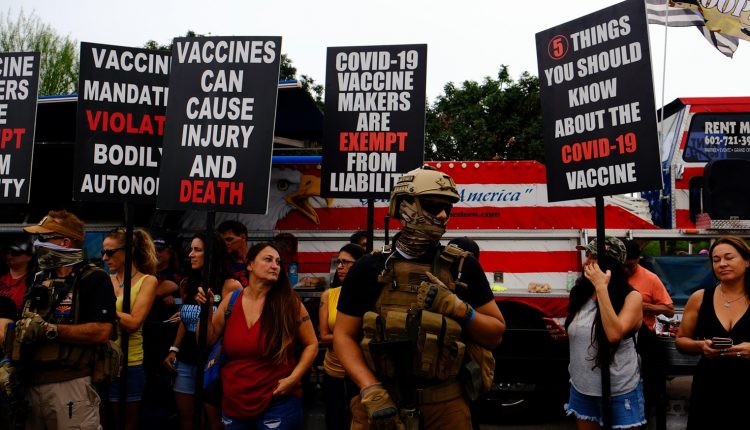 Hours before the long-awaited presentation of the results of Arizona’s bogus “audit” on Friday morning, a parade of Arizona’s most marginal right-wing characters gathered in the state capital for an event called “Liberty Revolution”.

Scheduled as a rally “against the ongoing medical tyranny,” as its organizers (the Arizona Coalition for Medical Freedom, an anti-vaccine group that was pre-pandemic) said, it was also expected to be some sort of celebration. after approval of the audit results.

However, the rally quickly turned into a screaming battle between a fragmented crowd. Speakers quarreled and became divided over whether the results of that month-long theatrical vote review (which, despite its highly questionable methodology, confirmed that Biden had won) actually turned out to be a victory for the far right.

Speakers on Friday included: Arizona Sen. Kelly Townsend; former US Representative and current candidate for governor Matt Salmon; and Pinal County Sheriff Mark Lamb, among others. They took turns taking the stage and addressing a crowd of over a hundred who had gathered, waving American flags and signs railing against both “forced injections” and electoral fraud. An armed militia calling themselves “Good Citizens” patrolled the (The mysterious group has appeared in protests since this summer, although its origins are unclear; one of the armed men told the Phoenix New Times that the organizers of the event “us asked to be here “as security, but without going into detail.)

But it wasn’t until former Fox newscaster Kari Lake took the podium that things really began to unravel.

When Lake tried to speak, she was confronted by an angry Steve Daniels, chairman of Arizona’s Patriot Party. He had offered her an anti-vaccine pledge and insisted that Lake was not “for the people.” Daniel was gone.

Lake was finally allowed to speak to the general enthusiasm, “Choice and our medical freedom go hand in hand,” she said, adding that the audit presentation for Arizona’s law would be “our Lexington Concord moment.”

But this belief was not shared by everyone. A faction of Arizona’s most ardent supporters of voter fraud has turned against the cyber ninjas’ efforts now that they are closed – because they appear to be eager to expose more voter fraud. When Daniels took the stage, he scolded the audit, calling it “the biggest mistake I’ve ever seen in my life”.

Some attendees who spoke to Phoenix New Times said they felt the same: “I don’t trust too many people right now,” said a woman who said her name was Cathy despite firmly believing in the election Fraud – there is “so much” evidence, she said.

Others said they had little interest in the exam results: “I’m only here to stand up for our own freedoms and rights,” said a woman who identified herself as Joyce, explaining that she and the man with whom they stood together were “Don’t get the jab.”

Indeed, some speakers spent little time delving into the 2020 election: Townsend’s speech, for example, largely fell into anti-vaccine nonsense (claims she’s made for years). “China did this to all of our compatriots,” she told the crowd, calling her own children “vaccinated” and vowing to protect her daughter, who was standing next to her, from the Covid shock. Most of the audience applauded.

As the rally ended, some of the crowd made their way to the Senate building, where more than two hours before the start of the audit hearing, dozens lined up outside the doors to enter. Whatever the results of the exam, it seemed unlikely that they would be shaken from their belief that the election was somehow stolen.

“We were lied to on November 3rd,” Lake insisted during her remarks. “But of course we already know that.”

Yuma Football has the ability to build something “Mo” – Yuma Pioneer