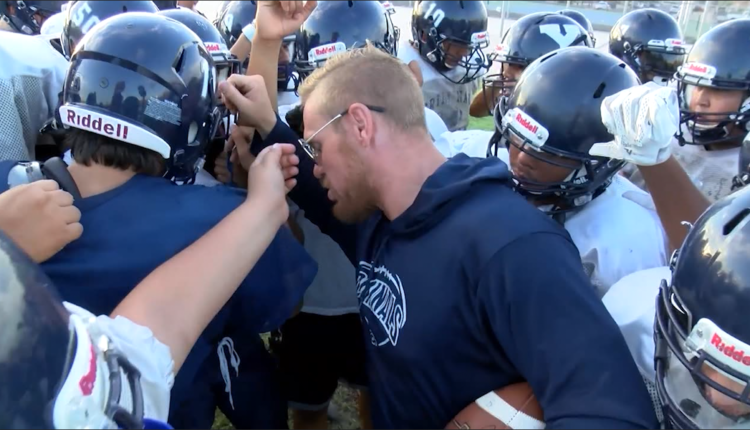 “Once a criminal, always a criminal,” Bo Seibel says goodbye to Yuma High

YUMA, Ariz., (KYMA, KECY) – “Once a criminal, always a criminal” is a common phrase among many inside the Yuma community – and it doesn’t stop with the Yuma football program, or their beloved former coach Bo Seibel .

The departure for Seibel comes bittersweet to Yuma High School. Not only did the Criminals accomplish more than they have in 29 years, but Seibel was beloved by the student-athletes who truly bought into what he and the rest of the coaching staff brought to the table.

A culture was developed, and a family was built – something that carried tough love through extreme hard work and accountability, while leaving the entire group with lifelong relationships and something to hold on to forever.

So while it may seem like Seibel’s unfortunate exit would turnout to be ‘a means to an end’ of the short successful run, it may be far from it.

And that’s the message Seibel wanted to share with the criminal community amid his goodbye.

“The program is there. The pieces are there. Like any program when you graduate seniors, I’m just a piece in the puzzle that kind of set the foundation,” said Seibel. “At the end of the day, it takes a village and everybody needs to be on that same vision and that same grind to understand where we’re headed and where we want the program to go. They now know the recipe of what to do and how to do it. Winning is a culture and these kids tasted it.”

Seibel now wants to head back home to his roots, to continue his coaching and teaching career with his family by his side. Growing up as a successful and dedicated athlete in Kewaskum, Wisconsin, he found his way through the coach-teacher realm.

Fittingly enough – and the piece that brings Seibel’s journey to Yuma full circle – is what happened after spending his final year-and-a-half of eligibility wrestling in college. Yuma’s Jeff Welsing, now Yuma Catholic’s wrestling coach and athletic director, recruited Seibel and brought him down to Yuma as an assistant.

Fast forward through two state titles in wrestling, Seibel found his way onto the football staff – eventually leading to the head coaching spot. Seibel brought a unique intensity and understanding of the game that he grew up to love – even showing his team this past summer how a culture is built by reflecting on his high school experience where his program went 44-7 in a four-year run.

Fast forward again three years to 2022 – Seibel leaves behind a program in its best position in nearly three decades.

While he tells News 11 it’s unfortunate to leave after what he helped build in a short three years, the foundation underneath the program is what helped influence him to depart, knowing it was in good hands.

The difficult part was telling them he was stepping away.

“It was way harder than I thought it was going to be. Not going to lie, I shed some tears with them,” said Seibel. “As a program we strive to be a family and I consider every one of those kids family. We spent a lot of time together, especially the seniors. Those were my dudes who were there for it all… Blood, sweat and tears , we did it all.”

Despite the sour taste to the end of the season, it was a win in the end. The team still rallied around one another, reflecting on their accomplishments. For the seniors, it was the point where they learned to grow and move on to the next level. For the underclassmen, a chance to taste the success and figure out how to keep the train moving for next year.

At the end of it all, Seibel reflected on the evolution of the program over a short tenure, from the time he first stepped foot in to the program. Taking a back seat and learning under Curt Webber for one year.

“One of the first things I noticed was we didn’t have the physicality. We didn’t look the part,” said Seibel. “My first year we went to see Brawley and Southwest play, who both made a deep run that year. It was awesome to see them play, but I noticed we weren’t even on the same playing field.”

From those first observations, it was Seibel who took it upon himself to make a change and get the players to believe in something.

“I’m a firm believer in the weight room, the training. It builds so much more than the physical aspect. There’s the character building, the discipline, the commitment and so forth,” added Seibel. “Another thing was I wanted to structure our program like a college program. Just like our district’s philosophy is ‘college and career ready,’ I wanted to have a football program that matched that. Just being at the college level and seeing how efficient practices were and attention to detail, I wanted to bring that to Yuma football.”

Seibel not only implements this style to win more games, but also to prepare his athletes for the future in college and in life – both on the field and in the classroom. One of the many reasons why he gained high respect from his team and staff.

And there was a certain mentality that spoke to this group like it never had before: good character.

“We went back to the drawing board after last year. We were right there in a lot of games. The biggest thing I took away from some mentors was the character aspect. We needed to become better men, and I lot of that fell on me,” said Seibel. “One of the biggest things I told them all year was that if I could count on you in the classroom, I can count on you on the field.”

That was a message that resonated with them until the day he left. Seibel not realizing that was something that stuck with them, but it hit home for him. All coming together, coinciding with the work they put in in the offseason leading up to this special year.

“Any time you’re getting 17, 18 guys showing up every single day in the summer, I knew we were on the right path,” said Seibel. “A lot of credit to those kids for sticking it out. We looked the part now. Now we’re playing as a team, as a unit. We were buying in.”

While most of the work was done in the weight room and the classroom inside the walls of Yuma High School, Seibel also credited the increasing support from the community and the school in their recent success.

“The community support in growing the program was huge. I remember when I first took over, we couldn’t get 20 people in our stands,” said Seibel. “Compare that to our last few games and, of course, the Hall of Fame game with the community showing out, it was great.”

A whole new culture, built in a very small window. A group of kids and a coaching staff that believed in one another and set the foundation for the future. A pretty unique story that can be carried on for some time.

All that was left was the final message from Bo Seibel as he settles down in his new home, still rooting and supporting his Yuma family from afar.

“Once a criminal, always a criminal,” Seibel said with a smile on his face. “The program is in good hands.”