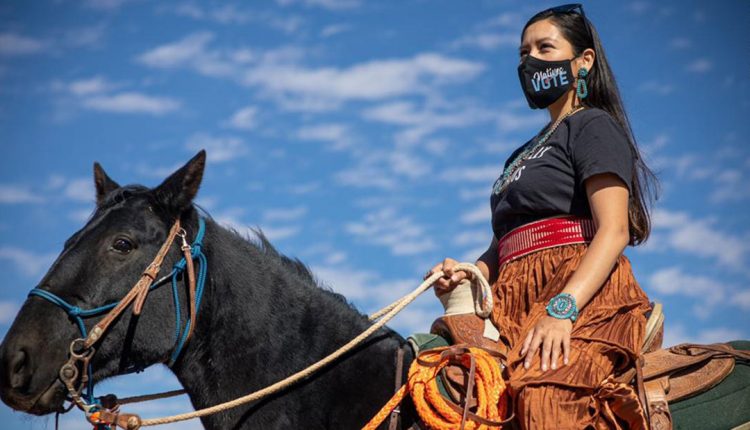 For many, Arizona is simply home to the Grand Canyon and conservative white retirees. But those with closer ties know that 22 nationally recognized Native American tribes and a growing Latinx population also live here. And in 2020, native and Latin American communities came to vote in large numbers – many of us cast our votes for President Joe Biden and Senator Mark Kelly, both Democrats. The Republican-controlled state assembly did not take the elections well with local voters like me. In the first three months of the year, conservative lawmakers introduced over 20 bills to restrict minority voting rights. The aim is to make early voting and voting by mail more difficult, to prohibit the possibility of same-day voter registration and to add unnecessary restrictions on voter identification.

If the bills were passed, they would undoubtedly suppress the voices of the Arizona Native Americans. But voters like me who campaign to get indigenous people to vote will continue to use our influence to fight this harmful legislation. We will team up with other underrepresented and downtrodden groups to ensure we have access to the ballot and our votes are counted.

Now let me summarize why these bills are so problematic. Many tribal citizens live on reservations and in remote communities, far from polling stations and post offices. It is already difficult for local voters to vote on election day – but options like early voting and postal voting gave us more opportunities to cast our votes and overcome some of these logistical hurdles. Additionally, some of the bills aimed at early voting would reduce the time to get a stamped ballot and return or peg. This is particularly problematic with reservations where many people do not have a postal service and have to travel to cast and receive their ballots. Worse, on Tuesday, Governor Doug Ducey signed one of those bills to restrict elections. Under SB1485, thousands of voters – including potentially many tribal elders – who did not vote in the last four elections, including the primaries, and do not respond to a final announcement, may be considered inactive. Once inactive, they run the risk of being removed from early voting lists, so a voter can automatically receive a ballot in the mail every time they vote. Since internet access for reservations is initially very limited, for those ready to get to the polling station, the passage of a recently introduced bill allowing same-day voter registration could have been a crucial step in getting them into the system to register. Now there is also a risk that this possible option will be completely eliminated. The interference with voting rights – especially Native American rights – is nothing new. Until 1948, Native Americans were not guaranteed the right to vote in Arizona. And even when we were allowed to cast our ballots, we were faced with a flurry of voter suppression tactics – including literacy tests and intimidation – designed to deter us from voting. But it’s no longer 1948, and as a local activist, I recognize the importance of my people’s voting rights. Our “Ride to the Polls” campaign was launched in response to the inadequate number of ballot boxes, polling stations and polling stations on polling day, as well as the very limited hours of operation across the Navajo Nation – the largest reservation in the US at 25,000 square miles.

We had to watch out for timing during our drives as the early polling station in Kayenta – one of the larger cities of the Navajo nation – was only open Monday through Friday from 10 a.m. to 3 p.m. This early voting location was also only operational from October 7, the first day of the Arizona early voting, through October 20. However, the last day of the Arizona early vote was October 30, which means the Kayenta site closed a full 10 days before the early voting period ended.

As a result of our campaign and many others in other tribal nations in Arizona, Indians appeared in great numbers. For example, in Navajo County, where the other drivers and I voted, the turnout was 74%, a 10% increase from the 2016 presidential election. The vast majority – about 75% – of Native Arizona voters were in favor, according to one Analysis of the Republic of Arizona voted for Biden and contributed less than 11,000 votes to the historic red-to-blue move in Arizona. When we attended the polls in honor of our ancestors, we showed the rest of the country that we are numerically powerful, especially when we come together as a community to fight for our rights.

This clearly intimidates the Arizona Republican Party – and is now a driver of its electoral repression efforts. But we won’t give up. We will build on the momentum of the 2020 presidential election and fight for our voting rights.

In my new role at Harness, a nonprofit that aims to raise the voices of underrepresented and misrepresented communities, I will continue to lead the work I started with the Ride to the Polls campaign to reach the public educate these races and use discriminatory tactics to impede democracy. We are planning virtual artist salons to bring allies, influencers, artists and organizers together to work with indigenous communities, AAPI (Asian American Pacific Islander) and black communities to develop strategies on how to support communities of color and racism and white supremacy can fight as a collective.

And we don’t have a moment to lose. Some prominent Conservative voices, including former Senator Rick Santorum, a CNN political commentator who recently delivered a whitewashed narrative of U.S. history to the Young America’s Foundation, are reinforcing the racist rhetoric that perpetuates the extinction of Native Americans and other marginalized communities . Despite Santorum claiming he “misspelled” there are many others who continue to advocate the exact kind of rhetoric that dehumanizes and disregards our communities – and that has historically been used to denounce the use of electoral repression justify.

In the 2020 elections, we showed up in our respective communities and proved that the organization of communities works. Given the GOP’s efforts to ensure we don’t reactivate ourselves like this, our color communities need to come together and get involved in the collective organization. When it comes to gathering our people, I am ready to show up at any marches that Stacey Abrams or Nse Ufot are planning, and I invite Stacey and Nse to ride with Native American voters like me in Arizona.