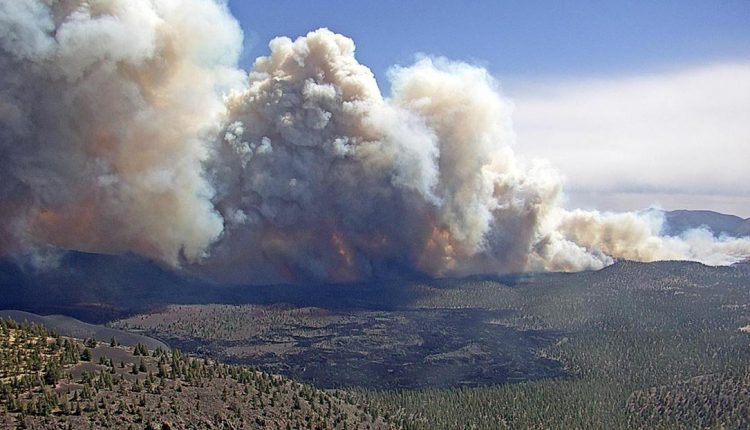 This article first appeared in the Arizona Daily Sun. It is used here with their permission and the author’s.

Arizona Daily Sun Editor’s note: This is a bit unusual to run a column on the front page, but I thought Mark’s perspective from his more than two decades working with Hotshots was a valuable read. He wrote this on a personal basis and not on behalf of any fire or forest management organization.

This has been a rough year for extreme fires in Flagstaff.

Before most of the US Forest Service seasonal workforce was even finished with their mandatory two weeks of training, the Tunnel Fire started in one of the windiest areas of the San Francisco Peaks, during one of the windiest springs I can remember. In addition to that, it was located in the Schultz burn scar, which, at 12 years old, was primed for a fast-moving and difficult-to-contain fire due to the tall grass and kiln-dried logs that are easily receptive to any hot ember that decides to land on it. The Tunnel is what one seasoned “fire dog” referred to as a career fire — meaning that experiencing a fire like that happens once a career, if at all.

Amazingly, this fire was in mid-April, and sadly, many structures were lost, despite the huge, aggressive firefighting effort. The Tunnel Fire was unprecedented for the amount of damage caused in that short amount of time. In a typical year the Coconino averages around 175 fires, and nearly all of them are caught early and mostly go unnoticed by the average Flagstaffian. This summer we have had around 23 fires already and two of them have become career fires. Both escalated to become the No. 1 priority fires in the nation, the Tunnel and now the Pipeline Fire.

I moved to Flagstaff 28 years ago from the East Coast and like most other Flagstaff transplants, the Peaks drew me here and have been my sacred place. The Peaks are the heart and soul of Flagstaff; some might say they are the heart and soul of the state. When I moved here, I knew nothing about wildfires. The little I did know was from what I saw on the news about the Yellowstone fires of 1988. Like most people, I didn’t understand why fire managers were letting Yellowstone burn and not putting them out; I was mad that all those forests were burning. If the internet had been around, I would have been a loud critic of the Forest Service, just like so many people today commenting in online forums like they are experts in forest and fire management.

Fast forward many years later, after a long career as a Hotshot, I now better understand wildfire and the critical role it plays throughout our Western forests. All of the forests are flammable and will burn, eventually. The work we do and our efforts each year are done in hopes that they burn under our terms.

During my career, my crew and I have been emergency-shifted from one fire to another two times. The first time was on an afternoon in 2010 when I was a Mormon Lake Hotshot and we were on the Tecolote Fire in New Mexico. The radio sounded out from Incident Command: “Get Flagstaff and Mormon Lake hotshots off the mountain and come to ICP and demob immediately, there is a situation on the Peaks in Flagstaff.” In a matter of hours (which is lightning fast in federal government time), we were out of the Santa Fe Wilderness and on the road home to help fight the Schultz Fire. The next day we were briefing with fire managers at the Chevron station on Highway 89. We would be deployed behind the homes of Timberline and tasked with doing whatever we could to protect them.

History repeated itself this week. While on the Cerro Bandera Fire south of Grants, New Mexico, I received a text from Flag Dispatch of a new start. These texts come daily and normally I read them and say to myself, “Oh, they’ll catch that one” — because we do 98% of the time. This time was different. Upon checking the text, I immediately realized this one could be a problem — it’s windy and it’s in a bad spot. After making a few phone calls, once again my crew and I were quickly released and on the way back home to protect the mountain we and so many others love so much. We made it to the fire seven hours after it was first reported, considering lightning fast we started that day in a different time zone. 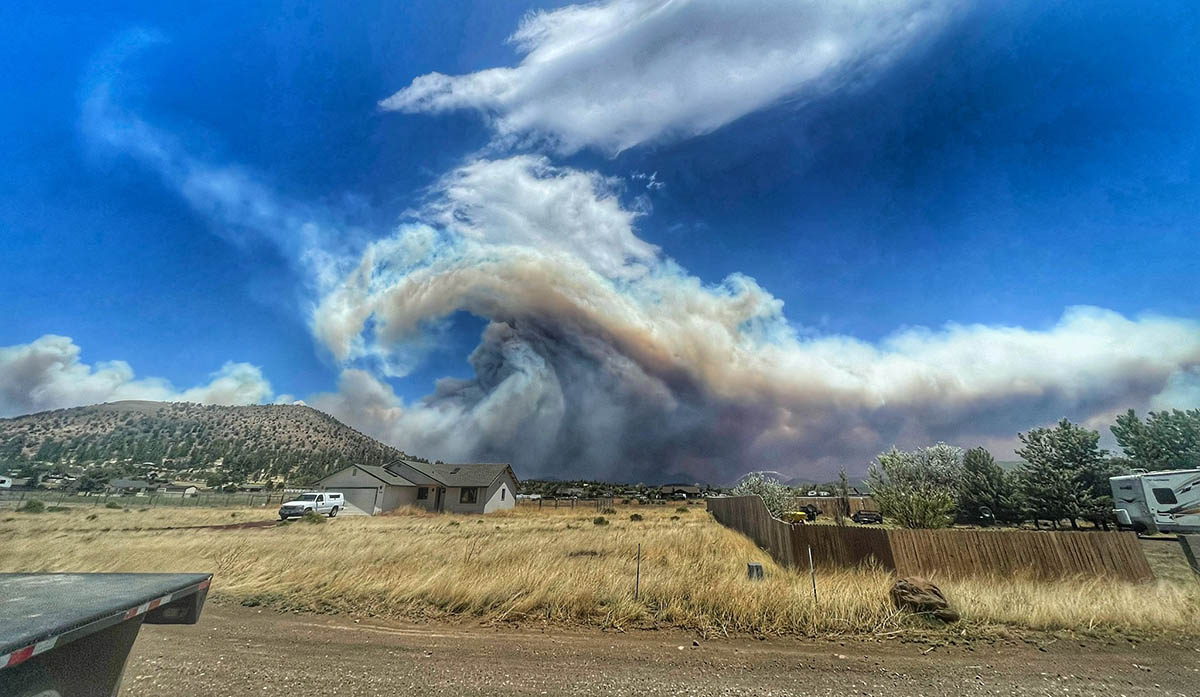 Luckily that night we were able to help others piece together a plan and save many homes through quick action and, ironically, having the already burned ground of the Tunnel Fire helping us. Had that fire scar not been there, the Pipeline Fire would have destroyed many more homes than the Tunnel Fire had.

The next few days, grueling work was put in by my crew and many other crews from around the nation. I am forever grateful to the three Hotshot crews from California that were with us on the ridge below Fremont Peak. Ninety people hiked in and out every day, working some tough ground that spanned from 8,500 to 12,000 feet in elevation. The air was thin, the hazards were too numerous to count and if someone got hurt, medical extraction would be challenging. The alternative to this option was not good. Had we not been up to the work, the fire would have continued to the west and with the strong westerly winds gone, it would have torched the entire mountain. All of Flagstaff would have been buried under sandbags for the foreseeable future.

Flagstaff dodged another bullet. We got lucky — lucky the firefighting resources were available, lucky they recognized the situation, lucky we were willing to accept the risk of injury or worse. It’s coming. It’s only a matter of time. All of the peaks, minus the rocks, are flammable and will burn someday.

Recognizing and accepting this will only help to protect our peaks. I say this because we have altered the natural cycle of fire for far too long. Now we have one of the most sacred places in the Southwest that is primed and more than ready for a catastrophic fire. Our challenge is to ensure that it doesn’t burn all at once and try to stay as close to the natural cycle as possible. And that natural cycle includes stand-replacing fires. We have a long way to go in protecting not only the Peaks but our forests in general, and it is time that we wake up and do what needs to be done. Everyone talks a good game, but we all can do more to ensure that we have healthy ecosystems to live in for generations to come.

There are ways that we, as a community, can limit the catastrophic results of the Big One:
1. Allow for day use only on the Peaks and Dry Lake Hills near Highway 89, 180 and across Forest Road 418.
2. Follow all campfire restrictions.
3. Educate the influx of out-of-towners moving here, often unaware of our wildfire-dependent and prone ecosystem.
4. Do everything in your abilities to prepare your home/property for wildfire. The 10 years you prepare before a fire are far more important than the 10 minutes or even hours before a fire — no matter how many engines, crews, airtankers and helicopters are available.
5. Support and obey any forest closures and don’t whine about it!
6. Get used to smoke! Support aggressive, forward-thinking fire management, including managing fires under the right conditions on the peaks and across the forest.
7. Reward and support active fire and forest management, including prescribed burning, even if there is an occasional bad outcome (99.8% of all prescribed fires are successful).
8. Question managers that do not take risks, by choosing the safe route — putting all forest fires out small, never managing a fire for resource benefit and not conducting as many prescribed fires as possible. They are just kicking the can down the road.

The Peaks are going to burn again and I would much rather they burn when we say so. Not when a campfire or burning toilet paper decides to get one going in the wrong spot on the wrong day. The choice to manage a fire or light a torch for prescribed fire is not one that we take lightly, the responsibility is huge! Things sometimes go wrong despite the best intentions. But the alternative of doing nothing has only one outcome and it’s not good.