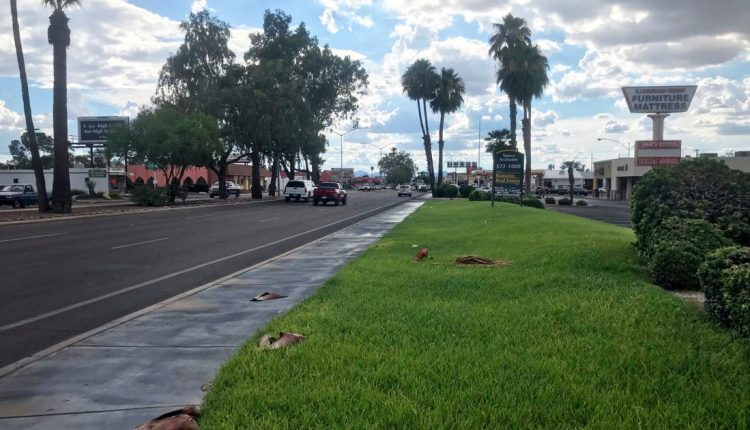 “Ornamental” grass could soon be banned in some Tucson developments

Ornamental grass plantings in new commercial and apartment developments in Tucson soon could be a thing of the past.

The Tucson City council voted unanimously on Tuesday to tell Tucson Water to bring it a proposed ordinance in 90 days banning what many water experts call “nonfunctional turf” in new developments within the utility’s service area.

That term typically means grass planted strictly for decoration. For now at least, the proposed ban would not extend to new single-family home subdivisions, since the idea’s leading backer, Councilman Kevin Dahl, doesn’t consider grass planted in them “nonfunctional.”

This action was among a long list of water conservation measures the council unanimously agreed to advance Tuesday. They included proposals to charge businesses at higher rates as they use more water; to require rainwater harvesting and other forms of “green infrastructure” in new subdivisions; and to require federally certified, low-water-use plumbing fixtures in new homes.

None were formally adopted, however. One of the most ambitious — the “green infrastructure” requirement for new subdivisions — could be 18 to 24 months from actual approval, with more time needed to put it into effect on the ground. The others could become law much sooner, possibly in six months.

The proposed ban on new grass in developments drew by far the most attention and discussion at the council meeting. It would follow in the footsteps of much stricter measures enacted in the Las Vegas area over the past two decades.

In 2003 and 2004, all municipalities served by the Southern Nevada Water Authority, including Las Vegas, passed development codes prohibiting any grass in new construction of commercial developments and the front yards of new single-family home developments. The codes allowed only 50% of backyards for new homes to be grass, said water authority spokesman Bronson Mack.

This year, those codes were updated to further prohibit any grass in any new constriction, other than in parks, schools and cemeteries, Mack said. In addition, in 2021, the Nevada Legislature adopted a measure that would require all “nonfunctional grass” to be removed from all non-single-family properties in Southern Nevada by the end of 2026.

These measures were all imposed because of worsening drought conditions on the Colorado River, the Las Vegas area’s only significant water supply.

‘We’re in a crisis’ with drought, river

At Tuesday’s Tucson meeting, Dahl also cited the river’s problems in pushing for the ban on new ornamental grass here.

“We’re in a crisis with drought and the Colorado River,” said Dahl, noting that US Rep. Raúl Grijalva of Tucson wrote the Interior Department two weeks ago asking it to impose water cutbacks on the seven river basin states, including Arizona, since the states have themselves been unable to agree on a plan for cuts.

“The states are not able to negotiate changes in the law of the river,” said Dahl, referring to a series of laws, regulations, court rulings and other legal strictures governing the river’s management. “We have to be prepared for what’s coming. The sooner we do it, the better. We can no longer afford ornamental green grass that is not functional.”

In response to questions from the Star, Dahl defined nonfunctional turf as “any irrigated grass area not providing functional use, such as grass along streets in strip malls, shopping centers, and businesses, and also turf managed by an HOA (a homeowners association) that does not provide recreational value for people or pets.”

Grass in parks, golf courses, school playgrounds and other recreational areas would be considered functional and not affected by his proposed ban, Dahl said. The same goes for grass at single-family homes, he said.

“I would consider residential turf as functional — people have kids, pets, etc. Plus, residential water customers pay tiered water rates, so if they do have a lawn they pay more for it,” he said, referring to the city’s rate structure that homeowners charge more per cubic feet of water used than their use exceeds specific thresholds.

In apartment complexes, if grass “is used by people as recreational, a place to gather or walk your pets, I would consider that functional. If it’s a thin strip of grass between the road and sidewalk, no,” he said.

Calling this suggestion a “no-brainer,” Dahl added he’s open to suggestions from city staff on how to phase out the use of existing grass in the future.

“Our water supply is drying up. This stuff is low hanging fruit” for conservation, he said.

Assistant City Attorney Chris Avery at first urged caution Tuesday on the council’s part in approving a ban on new grass. That’s because Tucson officials and those of other Southwestern cities are currently working together to negotiate a written commitment to reduce water use and to come up with a specific proposal by Nov. 15, Avery said.

Among other things, the proposal now calls for a program “to reduce the quantity of nonfunctional turf grass by 30% through replacement with drought- and climate-resilient landscaping, while maintaining vital urban landscapes and tree canopies that benefit our communities, wildlife, and the environment.” The proposal also calls for more steps to expand indoor and outdoor water use efficiency and water recycling efforts.

It’s been signed onto so far by the Southern Nevada authority, Southern California’s six-county Metropolitan Water District, and three urban water utilities in Colorado including Denver’s. Since 2000, these utilities have cut their combined annual water use by 1.15 million acre-feet while adding 3.7 million new residents, the proposal says. That’s a little more water than the Central Arizona Project will deliver to customers in the Tucson and Phoenix areas this year.

Tucson officials haven’t yet signed onto this proposal because they’re trying to get a broader coalition of city governments on board first, Avery said.

“I would submit that in the next few months, we’ll have a lot of discussion among a lot of cities. We will benefit by participating in that discussion and coming back with recommendations on how to define nonfunctional turf and how to maintain functional turf ,” Avery said.

Eventually, Dahl, Avery and Mayor Regina Romero settled on a proposal to have Tucson Water produce a local nonfunctional grass ban while continuing to work with other cities on a broader proposal crossing state lines.

Councilman Steve Kozachik said he doesn’t think these measures go far enough and that the city should also consider a ban on all front-yard lawns, a cap on backyard lawn sizes, restrictions on what hours people can water outdoors, and a requirement that people drain swimming pools into manholes so the used water will enter the sewer system and be reused.

“We need to up our game. When we exercise new fire hydrants and water wells, we just turn them on and let them go. I get calls that you’re telling us to conserve water, yet you make a lake on the street, “he said. “People see it all the time. It’s pretty evident we’re not walking the talk.”

At this point, without a real definition of what “nonfunctional” turf is in a formal proposal, “I do not have a comment,” said Michael Guymon, president and CEO of the Tucson Metropolitan Chamber of Commerce.

The chamber has been involved in the discussions about the city’s long-term water plan, known as Water 2100 Plan, “which we feel would bring about collective and innovative solutions from all sectors that thoughtfully and thoroughly address our region’s water future as opposed to what could be considered as piecemeal approaches,” Guymon said.

A longtime Tucson private water consultant and former University of Arizona water researcher, Gary Woodard, said he’s in favor of a nonfunctional grass ban, and “I’m having a hard time figuring out who would be opposed.”

Research has shown that a lot of decorative grass is almost impossible to efficiently irrigate and quite expensive to maintain, Woodard said. Much of these grass patches are laid out in strips between sidewalks and parking lots and streets, often in weird shapes or on long, grassy hills.

“They don’t make a sprinkler head that works” to efficiently irrigate such strips, he added. “Can you efficiently irrigate a strip of grass, 5 feet by 150 feet? No way,” said Woodard, who with a partner conducts water efficiency audits for at least six Maricopa County cities and has done them in the past for Tucson Water.

Longtime water conservation advocate Val Little also endorsed the ban on nonfunctional grass but said it could be difficult to implement because “one person’s nonfunctional turf is another person’s necessity.”

“It’s not an issue for me; I’m fine with it. The battle will be between people who want to use it (grass) with the council or staff that doesn’t think it’s functional,” said Little, founder of the Water Conservation Alliance of Southern Arizona.

But overall, she said, “Why would it be controversial? This isn’t a town that embraces lawns.”