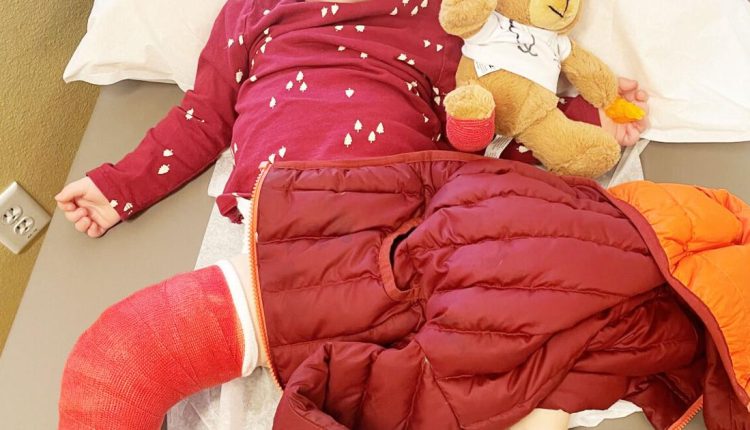 Both of Flagstaff resident Jennifer Shinamin’s sons broke one of their bones at a young age, almost exactly a year apart.

Her oldest son, Ashton, fell off the swings at a park in 2021, when he was 3. He landed on his elbow and his parents could tell something was wrong by the way he was acting later that night.

When he was having trouble sleeping that night, Shinamin took her son to the emergency room. The hospital said it didn’t look broken, but he was still acting strange in the morning.

“My gut was just like, ‘something is wrong here,'” she said. After being told she’d have to wait for an appointment by several locations, she was able to get one at OrthoNow.

OrthoNow is an “urgent orthopedic care” through Northern Arizona Healthcare (NAH), which takes walk-in appointments for acute injuries such as sprains, fractures and joint pains.

“It’s kind of a one-stop shop,” said Dr. Chris Diefenbach, an orthopedic surgeon specializing in foot and ankle, who works at OrthoNow. “We have X-rays in the office and we can get lab tests done and we try and really just expedite the orthopedic care for the patient so they don’t necessarily have to spend a long time in the emergency department and then just end up needing a referral to come see us anyway.”

Ashton turned out to have a greenstick fracture — where the bone cracks while bending rather than fully breaking, similar to what happens when someone tries to break a green stick into two with their hands. The doctor told Shinamin that ER staff aren’t always trained to see this kind of injury, which is more common in young kids.

After a few weeks with a cast, Ashton was “back to his normal self.”

Almost exactly a year later, Shinamin was seven months pregnant and walking down the stairs with her second son, Beckett, then one and a half when she slipped on one of the lower steps. She fell backwards, trying to avoid landing on her stomach, and his right leg landed underneath.

“That one was terrifying, because I was in a lot of pain, I had bruising on my back, I was worried about my pregnancy [and] I could see my son was in excruciating pain,” she said.

The family again called OrthoNow and Beckett ended up getting a full leg cast. He was so unworried that he fell asleep during the process, Shinamin said.

Diefenbach said treating kids with broken bones can be a little different than treating adults.

Kids will often need to get a cast over the entire extremity, rather than just part, which can add a level of complexity, he said. This is to make sure everything is properly immobilized and that the kid won’t wiggle their way out.

“Another component of that can be behavioral, it can be a little bit traumatic for kids,” he said. “Even though we’re not necessarily causing pain, it’s scary, so we have to find ways to try and get around that.”

For example, the doctors will use teddy bears to show the kids what they will be doing, giving the toy a matching cast to the one their patient will have. Shinamin said Beckett still plays with his bear.

Beckett’s healing process was a frustrating experience the first week, Shinamin said, as he wasn’t able to do as much as he used to. There was a lot of sensory play that week, she said, and a little more screen time than usual.

“They told me in the appointment that he’ll learn to walk on this thing and I was like ‘yeah, right.’ “He did. Once he was able to do that, there was a great sense of relief because he was happier, I was happier. Just that first week of seeing him so frustrated was another week of feeling so awful for your child, so it was.” really nice when he learned to adapt with his cast on.”

While Ashton had been nervous during his cast removal, Shinamin said Beckett found the process fascinating.

“[He] didn’t really care about the tablet or the headphones. He was watching the nurse take the cast off with immense entertainment,” she said. “It was very non-stressful, it was great.”

Everyone in the family is now doing “wonderful,” Shinamin said.

“It was like it never happened. My oldest son, he’s a cautious person, so that’s good, but my youngest son didn’t learn anything from the experience and I’m always trying to save his life,” she said, laughing. “Yeah, they’re good.”

Shinamin said she was glad to find care for her kids, especially in a smaller city like Flagstaff.

“When your kid gets injured, it’s your worst nightmare,” she said.”Obviously, you never want to see your kid in pain and you want someone to tell you that it’s going to be okay, someone to help your children. Flagstaff, we are on the smaller scale, we don’t have the same things that Phoenix has. Having OrthoNow, you know that you can get in right away, you can get your fears resolved and you have a staff who’s going to be so compassionate to what you went through.

“I was a mess in Dr. Diefenbach’s office — I fell down the stairs while pregnant, holding my baby. The amount of guilt was just enormous and the kindness I got from him and everyone, it just made me feel like I’m so Glad we have this. It helped a horrible situation feel a lot better.”

More information about OrthoNow can be found at nahealth.com/orthopedic-services/ortho-now.