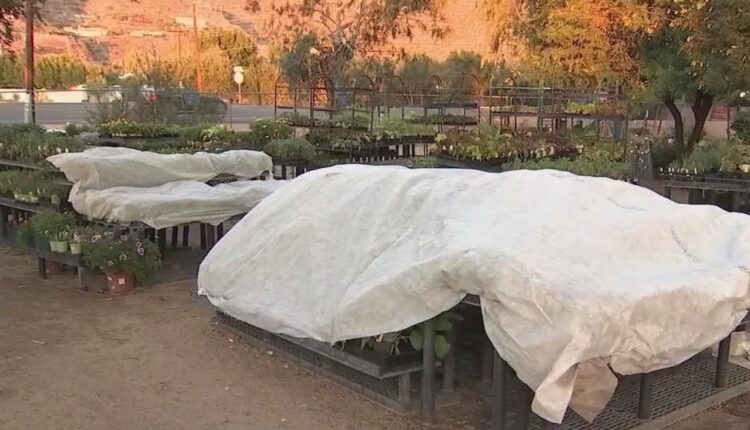 PHOENIX – Berridge Nurseries in Phoenix is getting ready for a visit from chilly weatherpossibly freezingand workers there suggest you do the same.

“For that situation, we would probably recommend doing some frost clothing or moving plants if they’re in pots underneath some patio areas and stuff where they’ve got some protection over the top,” said Mark Pfeil with Berridge Nurseries.

Snow is expected in Flagstaff by Sunday night and will be the heaviest in the early morning around 3 am As for the rain in Phoenix, that’s expected just before midnight on Sunday.

Once that round of winter weather is over, it’s time for the second round as scattered snow in the high country and rain in the Phoenix area is likely late Monday and into Tuesday morning.

If you choose to leave your plants outside and cover them, you have to make sure the protective layer isn’t going to freeze onto them.

“Sheets or frost cloth,” Pfeil suggests. “Anything directly on top is probably not always that good because the cold air is going to sink down to that situation. So if we can tent it, put some stakes in or whatever, that would really be helpful. It kind of creates a dead airspace, and it really helps out with the plants.”

The call it “nipped,” when a plant gets frostbite. You can actually see a visible difference when that happens to certain plants. In Phoenix, favorites like geraniums, hibiscus, poinsettias and succulents could be hit the hardest.

Even if we just end up getting rain and chilly weather, instead of a frost, Berridge Nurseries says it still waters its plants, and they include something called seaweed extract.

“It’s like building your immune system. It makes the plant a little healthier and a little bit able to handle some more stresses such as cold weather. So that would be a benefit as well. Water, covering, and moving them together because they respirate and kind of keep everything warm in that area,” Pfeil said.

20 of the Best Tucson Restaurants Including Cheap Eats and Desserts

Tucson Roadrunners Road Ahead: Week For The Birds