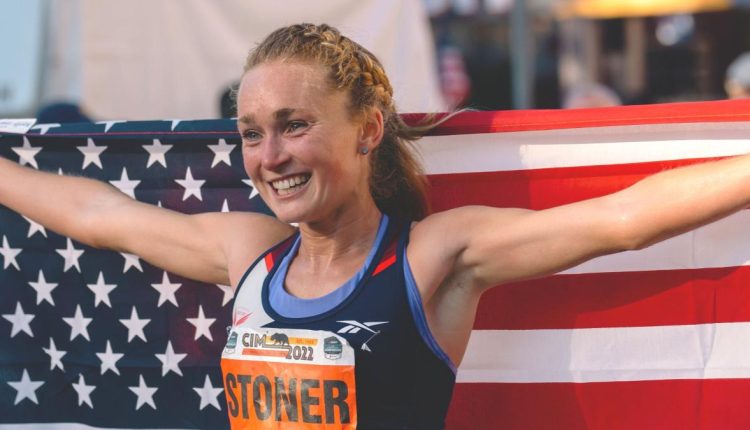 Paige Stoner knows that going after big goals sometimes requires making big, bold changes and a lot of sacrifice. That’s especially true when that goal is running a fast marathon.

With that in mind, the 26-year-old Reebok-sponsored runner decided to make a major life decision in late July to leave Charlottesville, Virginia, for the training mecca of Flagstaff, Arizona. While it was a commitment to her continued immersion in the marathon, the move meant parting ways (on good terms) with her training partners from the Reebok Boston Track Club and coach Chris Fox, who had guided her through her first two marathon training blocks, and temporarily being away from husband Codi Wood, who is still working full-time in Virginia.

She found Flagstaff to be nothing short of a marathoner’s paradise, with not only a vast running community and plenty of people to train with, but also a seemingly endless array of wide-open roads and smooth dirt trails to run on. Although she’s spent time away from Codi, who she married on March 1, the inspiring setting in Flagstaff — and perhaps the dreamy idea that they’ll buy a house there next year — helped her amp up her training and take her fitness to a whole new level.

It paid off on Sunday as she ran to victory at the California International Marathon (CIM) in a course-record 2:26:02, a win that also netted Stoner her first US championship. But she hopes Flagstaff will continue to pay dividends.

“I knew that I was definitely fitter than I’ve ever been, but I didn’t know exactly what it would turn into pace-wise for the entire marathon,” said Stoner, who sliced ​​more than two and a half minutes off of her previous personal best.

Early in the race, Stoner, Lauren Hurley and Elaina Tabb separated themselves from the rest of the women’s field by the 10km point (34:19). Soon after that it was just Stoner and Hurley, who ran stride for stride through the halfway point (1:12:20) and remained close through 30km (1:43:14).

From there, Stoner’s hard-earned at altitude fitness proved to be the difference — even if she was running in uncharted territory — as she gapped Hurley by 31 seconds over the next 5km and expanded that lead to the finish. Hurley ran a strong race in her debut, taking second in 2:27:41, followed by Tabb (2:28:04), Bria Wetsch (2:28:35) and Katja Goldring (2:29:01).

“To come through halfway and be on pace to run 2:25 definitely made me a little bit nervous, but I was feeling so good, I just told myself, ‘Don’t read too much into the splits. You feel great right now , keep this rhythm going,'” said Stoner, who broke Sara Vaughn’s year-old course record. “I didn’t know what I could do time-wise, but I just wanted to get out there and compete for the win and tried to settle into an effort that felt comfortable.”

Although Stoner had visited the Arizona running mecca for a few weeks in 2021, this was her first full training block done entirely at the 7,000-foot environs of Flagstaff. It took about two months to fully adjust to the altitude but it eventually came around and gave her a huge confidence boost.

At her peak of training volume, Stoner averaged between 100 and 110 miles and twice reached 115 miles. She also ran many more long up-tempo workouts in the 8- to 12-mile range. She got some coaching tips from her mentor Ryan Hall — she works as a part-time coach for the RunFree program Hall and Jay Stephenson started a few years ago — and trained a lot with Sarah Pagano and Emily Durgin. From August to October, they did most of their long runs and hard workouts together, until Pagano and Durgin began their taper for the New York City Marathon on November 6.

Having the camaraderie and shared sense of purpose that comes with marathon training was a huge boost, Stoner said.

“It keeps it really fun when you have people you’re genuinely looking forward to seeing every day and spending an hour or two running with,” she said. “I’m so grateful I had them to train with for as long as I did. We understand the commitment it takes, and we all have a lot of respect for each other. It’s certainly easier to do (workouts) or do those longer fartleks when you have company.”

Up until 2020, Stoner was focused on the 3,000-meter steeplechase — a grueling 1.8-mile track race with 28 fixed barriers and seven water jumps — an event in which she placed third at the NCAA Championships as a senior at Syracuse. But when the COVID-19 pandemic hit in 2020 and races on the track disappeared, she decided to boost her mileage and train for The Marathon Project in December of that year.

Although Fox and her collegiate coach Brien Bell figured she’d eventually become a marathoner, Stoner surprised herself in her debut at 26.2-mile distance by finishing seventh in 2:28:43, which was the fastest time ever by a US runner under the age of 25

“Once I heard they were putting that race on, it just got me excited,” she said. “The idea of ​​having anything to train for at that time was exciting. I figured, ‘Why not?’ It just kind of confirmed what Coach Bell had been telling me. He was always certain I would be a marathoner.”

The CIM race was a key event for American marathoners trying to qualify for the US Olympic Trials Marathon that will be held in February 2024. Led by Stoner, 44 women surpassed the women’s qualifying standard of 2:37, while 42 men reached the men’s standard of 2:18.

For Stoner, though, it was more a race of redemption. In her second attempt at the marathon, she struggled in the second half of the Boston Marathon last October and finished in a lackluster 2:35:55.

Undeterred, she took the lessons she learned from her first two marathons, moved to Flagstaff and took the reins of her own coaching to enhance her training — not only increasing her volume and intensity but also doing more hard downhill runs and wearing traditional training shoes instead of carbon-plated racing shoes to prepare for the descending CIM course.

Stoner said she did a better job managing her energy through the early miles of the CIM course than she did in Boston and nailed her mid-race fueling. She said her legs felt great until her legs started to get weary in the final 3 miles of the race, when she had to grind it out to secure the victory.

“I was a little nervous about it being so downhill. I kept having people tell me that CIM was a mini version of Boston,” Stoner said. “I really struggled in Boston because my legs were so beat up by mile 15. I came away from that knowing I didn’t do nearly enough downhill preparation, so this time I intentionally tried to beat up my quads more on long runs.”

As of this week, nine women have run faster Olympic Trials qualifying times than Stoner’s 2:26:02, including the 2:18:29 American record Emily Sisson ran at the Chicago Marathon in October and the 2:19:12 effort of Keira D’Amato last January in Houston to set the previous US mark.

“I was surprised how easily low-5:30 pace was coming. I kept telling myself, ‘If you can keep feeling this good and relaxed through 20 miles, you’ll be able to finish strong,’ Stoner said. “I know it’s a great step forward but I have a lot of work to do and a long way to go to get to the point where I am competing with some of the real top-tier women in the US”

By then, life will be continued in earnest for Paige and Codi. He wasn’t able to be there for her amazing race, but he tracked her progress online and then called her immediately afterward. He’s looking for a new engineering job in Flagstaff, as the couple plans to stay there indefinitely as she continues her journey in the marathon.

“We’re trying to save money to make a down payment on a house in Flagstaff. It’s our big goal right now so we’ve been penny pinching a bit to make that happen,” Stoner said. “I really love it here. It’s such a great community of people. It really feels like home.”

For exclusive access to all of our fitness, gear, adventure, and travel stories, plus discounts on trips, events, and gear, sign up for Outside+ today.

Talks over protecting Dreamers pick up in Congress, but agreement still elusive