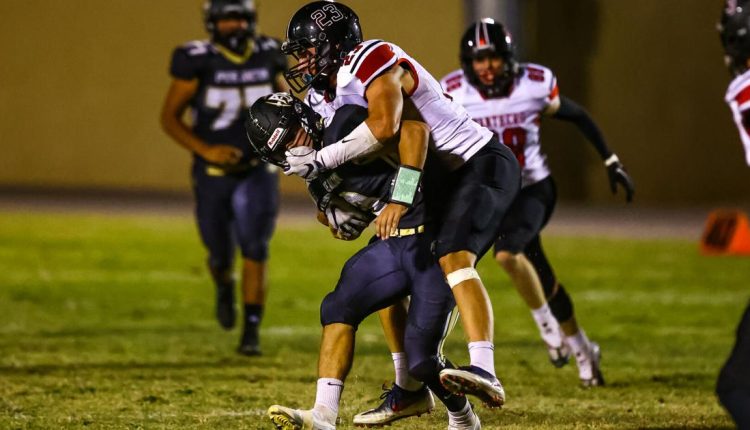 Halfway through their 2022 football season, the Coconino Panthers are ranked No. 17, just one spot out of playoff contention, ahead of their home game against No. 24 Lee Williams today at Flagstaff.

The 4A Conference Panthers (2-3) open the region part of their schedule with their contest against the Volunteers hoping to get a solid start and move back to .500 with their first Grand Canyon win.

Each of Coconino’s three losses this season have come by six points or fewer, and it has had a lead in all of them.

While it was not the start they were hoping for, the Panthers are still in position to contend for a Grand Canyon title.

“We don’t like losing as a team, so with our record we’re pretty bummed. But it just allows us to work harder to get where we want to be,” junior defensive lineman and tight end Prayer Young-Blackgoat said. “Practices are getting better, so I feel strong about our team and where we are right now.”

Young-Blackgoat is part of a defensive unit that will attempt to slow down the Lee Williams offense. The Volunteers (3-2, 0-0 Grand Canyon) are led by senior quarterback Troy Edwards in a pass-heavy system. He has thrown for 1,160 yards and 12 touchdowns through five games, and is also the leading rusher with 269 yards and six scores.

Junior receiver Devin White is the top receiver, having amassed 516 receiving yards and four touchdowns. Lee Williams scored just 12 points in his last game, a loss to Apache Junction, but had averaged 49 per game in their previous three contests.

The Panthers played against a similar style of pass-happy offense in last Friday’s 31-28 loss at Northwest Christian. Young-Blackgoat, senior Pierson Watson and senior Tyler Ragan each have four, five and five tackles for loss, respectively, and have been effective in stopping the run. Panthers coach Mike Lapsley hopes the defensive front can utilize those skills to force pressure on the Volunteers offensive line and not give Edwards the time necessary to read the field and complete passes.

“We identified, basically, that we’ve given quarterbacks too much time. So we’re emphasizing the defensive line to get back there and apply a lot of pressure and make sure he’s uncomfortable,” Lapsley said.

“We worked a lot on pass rush moves and go-rush this week so that we can be better at QB pressure and trying to get sacks or hurries,” Young-Blackgoat added.

Offensively, the Panthers have been consistent each week. They have scored exactly 28 points in each of the past three games in a run-heavy, time-killing style. They hope to have similar success against the Volunteers, but have had trouble starting strong in the past against them.

Last season, Coconino defeated Lee Williams, 29-10, at home. But the Volunteers were exceptionally early, while the Panthers couldn’t get anything going. Lee Williams actually led at halftime on a touchdown by White late in the second quarter.


Senior Brayden Petersen leads the Volunteers in both tackles (50) and tackles for loss (10.5). Coconino will have to maneuver around one of the region’s top defensive players, but a fast, aggressive start would go a long way in earning a victory.

“They always give us a dogfight. That’s going to be a given. They haven’t changed drastically since last year, but we’re going to have to be prepared for whatever they throw at us,” Lapsley said.

Coconino has not performed up to its own expectations in the standings so far. A few early losses hurt what could have been a solid start to the year. However, with region play beginning, a victory could be the spark to give the Panthers some positive momentum down the crucial stretch of the season.

“We just need to win and once we get that we’ll keep going with it,” Young-Blackgoat said.

Kickoff between the Panthers and Volunteers is set for 7 pm at Coconino High School.

Will Covid Spike Again This Fall? 6 Tips to Help You Stay Safe