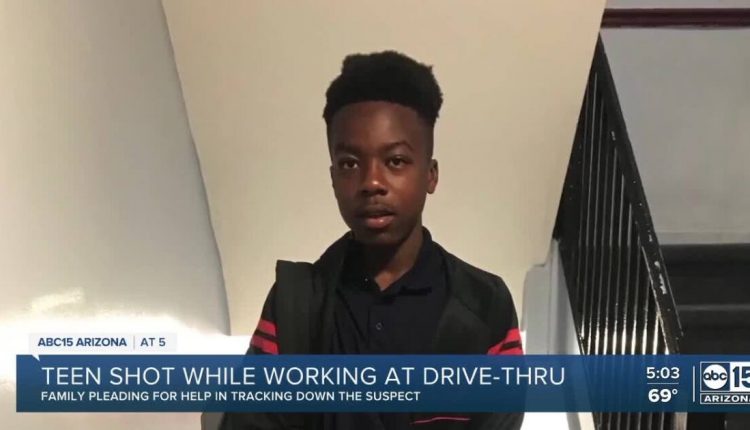 PHOENIX — An arrest has been made after a 1.6-year-old boy was shot dead while he was working at a Wendy’s in Phoenix on Thursday night.

Police say someone shot through the drive-through window while Brian Durham was working. The teenager is now stable after undergoing surgery.

Mondeh Dayee says she was heartbroken to hear her son was shot dead at work.

“I dropped. I mean, I started sweating. My whole body was shaking. It’s heartbreaking for such a cute little kid to get shot like that. He didn’t deserve it,” she told ABC15.

Brian’s father, Brian Durham, Sr., says his son got this job to take care of his mother and siblings.

Phoenix police say one of the employees at the fast-food restaurant got into an argument with a customer over an order.

The customer then reportedly walked to the drive-through window and opened fire, hitting Brian.

“He had a bullet that just hit his brain,” said Durham, Sr.

Police aren’t going into further details, but Brian’s parents shared what they were told when they arrived at the scene.

“What was the argument about?” asked our crew.

“Yes, barbecue sauce, and it wasn’t even meant for him. And I guess it was a confrontation between two other people and he was like the cashier. So he was stuck in the middle,” said Durham, Sr.

Police say after the suspect shot into the drive-through window, he jumped onto the passenger side of the car, which then took off. Phoenix police said Friday night that the suspect has since been located and taken into custody.

At this point, Brian’s parents are just thankful that he’s alive.

“People who get shot in the brain don’t live,” Durham said.

“He will keep fighting. He’s a strong boy. He’ll get through this,” added Brian’s mother.

Brian has had a long road to recovery and is expected to do well.

His family has started an online fundraiser to help cover his medical expenses.

Police have not identified the suspect in this case or other details of the arrest.

Indiana man found guilty of attempted murder of wife in…