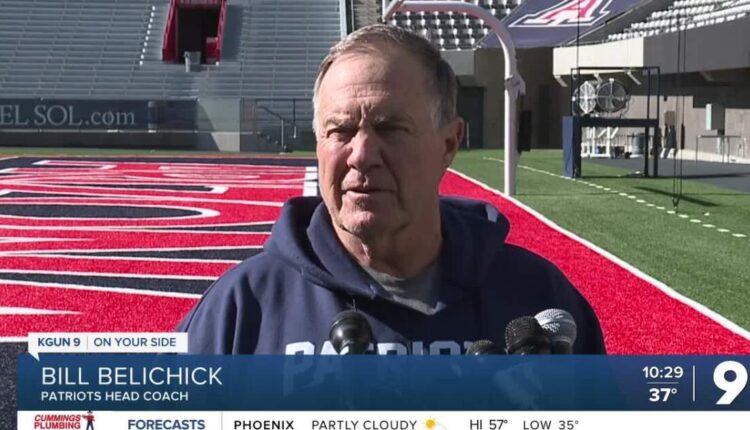 Patriots practice in Tucson in between west coast games

TUCSON, Arizona — With his name above in the Arizona Stadium Ring of Honor, New England Patriots kicker Nick Folk worked out on the Dick Tomey practice fields today.

Folk and running back JJ Taylor are the two current Patriots who played for the Arizona Wildcats. They join a list that includes legendary Patriots Tedy Bruschi and Rob Gronkowski.

“I’ve been here a couple of times, before,” said Patriots coach Bill Belichick before practice. “It’s great. It’s a college campus stadium. There are quite a few names up there that I’ve coached.”

Arizona head coach Jedd Fisch was Belichick’s quarterbacks coach the year before he took over the Wildcats.

“It’s a really good program, here,” said Belichick. “Jedd has done a good job of getting things going in the last two years.”

The Patriots are coming off a Monday Night Football win at the Arizona Cardinals. They visit the Raiders on Sunday, and chose to stay in Arizona rather than travel back east between games.